RUSH: Robert in Corona, California. You’re next as we stick with the phones on the EIB Network. Hi.

CALLER: Mega dittos, Rush. Thank you so much for taking my call. I’m a 25-plus-year listener. I’ll get right to the point.

RUSH: Wait a minute. How old are you now, Robert?

CALLER: Well, I had my father watching your television show.

RUSH: Yeah? It’s a long time, even though it seems like it went by overnight.

RUSH: Anyway, I’m honored. I just want to tell everybody that’s been here that long, I am totally appreciative of that, and I’m just amazing. It’s been 25 years and you haven’t found anything better. That’s great. I appreciate it.

CALLER: Rush, my talent’s on loan from God, but any education comes from the EIB University.

RUSH: Well, good for you. That means you’re in a good place.

CALLER: Thank you, sir. My point is this: I really think that there may be — I’m not aware of ’em, but — Blue Dog Democrats hiding in the bushes somewhere that will not come out. And the reasoning is because they have been maligning our great president for so long, and when they lose — and they will — in 2020, how will they explain that? And I think that Mr. Biden is probably the only closest thing to a Blue Dog out there, and he would really like to have this. He always has. All of the other ones I think are just, as you say, looking for face time — and I really believe that. How will the Democrats ever explain to anybody in their circle that they lost to Donald Trump?

RUSH: Well, it’s an interesting theorem that you have to have evolved here, clearly with the influences of EIB. I can hear it throughout this theory.

RUSH: Let me… (laughing) Let me make sure that I understand. You think that there are some high-caliber Democrats that have not run precisely because they don’t want it known… They don’t want it to happen that Donald Trump — the universally re-rivaled, supposedly hated by anybody — beats them. So what we’ve got here is a list of people just trying to make a name for themselves in a short run, with maybe a couple of people serious about winning. Is that pretty much what you’re saying?

RUSH: Well, who are these Blue Dogs out there that aren’t running? Do you have any names of Democrats?

RUSH: How you defining Blue Dog?

CALLER: Well, I’m talking about someone who’s probably fiscally conservative and possibly center or center-left when it comes to social issues.

RUSH: Pfft! There’s nobody that could hope to prevail in the primaries with that current makeup.

RUSH: I don’t know who they are. You are illustrating something very interesting. Your definition of Blue Dog basically is a southern, conservative Democrat. And they don’t exist. If they do, they are very quiet about it. They are not heads up. They are not frontrunners. They are not the people that define the party. I don’t think that the Democrat you just described exists. Now, people might disagree. “No, Rush, a lot of them are. They just don’t have the guts to come out because of the radical left direction that the base of the Democrat Party has become.” 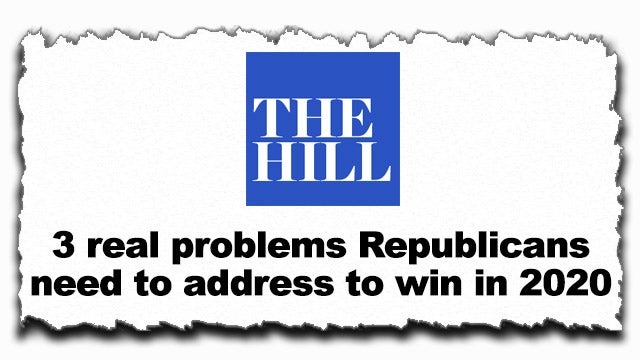 Look, I know what mistake they’re making, and I’m reluctant to say it here. I’ve referenced it a couple of times, but not in the context of, “I know the mistake they’re making.” Interestingly enough, there’s Mr. Nehring, who I just quoted (the former head of the Republican Party California) with his take on the issues that matter to actually winning for Republicans in 2020. He made reference… When he said “clickbait,” he really meant something else. We all know what clickbait is. Clickbait is likes. Clickbait is retweets.

I think the Democrats and all of journalism have become totally ensnared by a prison called Twitter. I know it’s happened to journalism. Twitter has become a stand-in for national public opinion — and it’s easy. It entails or it promotes pure laziness. All a journalist has to do is go get some random, anonymous tweets — or tweets from people whose names you know but nobody knows who they are. They’re totally unknown. You put them in a story that advances a narrative, such as “Trump sucks!”

How hard is it to go to Twitter and find two or three really deranged Democrats who think Trump sucks, and you post those three tweets as “evidence” for your narrative of your story. And what they think they’ve done is essentially consulted the majority of Americans when they’ve gone and looked at Twitter, and that provides the “evidence” or the “fact” for their story. And then it’s just as easy to go to Twitter and get a tweet from some deranged lunatic on the right and portray it as mainstream Republicanism or conservatism.

And once you do this, be you a Democrat candidate for any office or be you a journalist, you become a prisoner to all this. And as far as Democrat candidates are concerned, they become convinced that Twitter is their base, that Twitter is what they have to answer to. Because when something goes wrong for a Democrat and the internet “blows up,” what actually happens when the internet blows up? Nine times out of 10, it’s Twitter goes nuts. So when Twitter goes nuts over something that a Democrat did or didn’t do, that has the power to them of representing their entire base.

So they become prisoners to whatever is said and done and published on Twitter. And that’s one of the reasons why everybody thinks that the Democrat base has gone Looney Tunes radical left, because… Well, it’s mostly true. But it’s like Robert’s point here. There are some Blue Dog Democrats out there, there probably are some socially conservative Democrats out there who don’t have the guts to ever surface and say so, precisely because Twitter would blow up and take them out. And I don’t know how this ever changes.

And, by the way, there are a couple of Democrats… I can’t remember their names, but there are a couple of Democrats who have warned these candidates, “You had better stop paying attention to Twitter. But they can’t. They can’t. Twitter is instant. Twitter is instant feedback. And once you believe that Twitter is your base and that Twitter is majority American thinking, then the Twitter prison has you. You are an inmate. And they can’t escape this prison even if they want to. The Democrat candidates are not in control of their agenda.

This race to the left? One candidate comes up with a plan to provide health care for X-number of people and the response is, “I’ll give health care to everybody!” “Okay, I’ll give health care to all illegals, too!” And they all keep raising their hands as these proposals move further and further left. Because if they don’t, they will hear from Twitter. And it will be mean. And it will be vicious. Look what happened to the New York Times. You think I’m making this up? The New York Times comes out with an honestly fair, harmless headline about a speech Trump makes on race.

Twitter blew up. Twitter blew up, threatening to cancel all these subscriptions. The New York Times panicked! They rewrote the headline. They made a public case of demoting the headline editor who wrote that headline, and then they doubled down and said, “Okay, we’re changing the whole narrative now. Since the Trump-Russia thing bombed out, we’re now gonna change American history, and we’re gonna say that America actually was founded in 1619 when the slaves arrived.

“That is what defines American greatness.” All of this is in response to Twitter. Not to say that there aren’t people at the New York Times who think this on their own. There clearly are. The bulk of the Democrat Party is radical left. And Mr. Nehring’s point for Republicans is (paraphrased), “Ignore this! Ignore what your Twitter reactions are. Ignore this stuff. It doesn’t matter what Alexandria Ocasio-Cortez is saying or doing; it doesn’t matter what Ilhan Omar is saying or doing.

“It doesn’t matter what Rashida Tlaib is saying or doing. It’s irrelevant in terms of reelecting Donald Trump,” and he may have a point. Now, I did get a snarky email during the break. “Rush, you say this guy was the head of the California Republican Party?” Yes, sir. “Well, then why are we listening to him?” (laughing) Meaning, “What happened to the Republican Party in California?” (laughing) Some people are really cruel out there, folks.