I Do Not Panic About Trump-Hater Polls

RUSH: Now, the AP has a story touting their latest poll. Are you ready? 62% disapprove of how Trump is handling his job. You might think, “Whoa! Rush, that’s horrible! Oh, my God! All of this criticism of Trump is working. Sixty-two percent.” 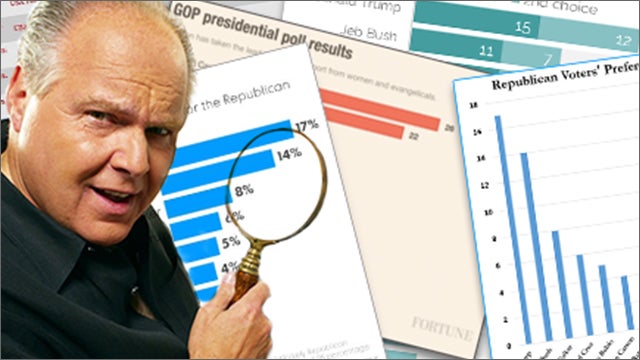 Here’s their story. “About 6 in 10 Americans disapprove of President Donald Trump’s overall job performance, according to a new poll released Thursday by The Associated Press-NORC Center for Public Affairs Research, which finds some support for the president’s handling of the U.S. economy but gives him weak marks on other major issues. Just 36% of Americans approve of the way Trump is handling his job as president; 62% disapprove.”

Now, listen to this next. “The numbers may be ugly for a first-term president facing reelection in 14 months, but they are remarkably consistent. Trump’s approval rating has never dipped below 32% or risen above 42% in AP-NORC polls since he took office.

“No other president has stayed within so narrow a band. Since Gallup began measuring presidential approval, Trump is the only president whose rating has never been above 50%. Still, several — Harry Truman, Richard Nixon, Jimmy Carter, George H.W. Bush and George W. Bush — logged ratings worse than Trump’s lowest rating so far at some point during their time in office.

“The numbers may be ugly for a first-term president facing reelection in 14 months, but they are remarkably consistent. Trump’s approval rating has never dipped below 32% or risen above 42% in the AP poll. No other president has stayed within so narrow a band since Gallup began measuring presidential approval. Trump is the only president whose rating has never been above 50%.”

Now, I wonder why that is? Anybody want to take a stab at explaining why that might be? Several presidents, Harry Truman, Richard Nixon, Jimmy Carter, George H. W. Bush, George W. Bush logged ratings worse than Trump’s lowest rating so far at some point during their time in office.

“Trump’s poor grades in the AP-NORC poll extend to his handling of several key issues: immigration, health care, foreign policy and guns.” So basically the AP’s telling us that the country that elected Trump to fix immigration, to fix health care, to protect the Second Amendment, is being overwhelmingly disapproved in his job performance in those issues. I don’t think that’s the case.

Now, look, we gotta live with the polling data. It is what it is. If you’re gonna talk about it once, you can’t discount it here and accept it over there. But you can dig deep into the crosstabs and find out who the sample was, what the sample size was, what the demographic and political party affiliation breakdown was. And then you can assign the objective purpose of the poll.

And the opening statement here where Trump gets credit for the economy — da-da-da-da — yeah — remarkably consistent, Trump’s doing okay on the economy but all this other stuff is kind of where the problem is. But the problems that Trump’s having are all with Democrats. He’s still at 80% approval with Republicans, and in some polls at 92%.

RUSH: So I checked the email during the break. And, you know, when I get emails like this, I’m alternately (admittedly) a little disappointed and, on the other hand, excited but thrilled that I get a chance to explain something again. (sniveling) “Mr. Limbaugh, how can you be so cavalier and so unconcerned about a poll? I don’t care whose poll it is, Mr. Limbaugh. How can you be so unconcerned about a poll showing the president disapproval at 62%? Even if you’re faking it, it’s still not good.” My friends, I’m not cavalier about it. I just don’t panic.

It doesn’t mean anything right now. How about if I directed you to another direction. There’s a simple other part of that poll. Over 80% of Republicans thumbs up on the job Trump is doing. What does that mean? Means trump is holding his base. There’s another measure that in politics is far more meaningful than this stuff ’cause there’s a poll every day. And they’re different! There isn’t any other poll out there that shows Trump at 62% disapproval. This is AP. They hate Trump. Take a look at the fundraising numbers. Trump is stomping everybody.

Trump is raising in the state of Washington, he’s raised more money in a state that he’s not gonna win, he’s raised more money than the top five Democrat presidential candidates combined. You have to put all this stuff in context. This is an outlier, and it’s not part of a trend. It’s part of an agenda. And you have to keep that in mind. That’s how I digest this stuff. Is there reason to be concerned? Well, yeah. We’d love it to be the other way around, but we don’t live in that kind of atmosphere. We don’t live in that kind of country now.

We are a divided country, folks. The days of finding a coalition where the strength of it is the center, that’s not where we are. The people gonna win this election whichever base is the largest and turns out. All this talk about, “Rush, the moderates, the great unwashed, the undecideds, the centrists and so forth…” Are there any centrists out there of any significance, in terms of number? This is an entirely different — and this poll, of course, assumes that everything’s rosy and peachy keen on the Democrat side, and it isn’t. They are in a royal mess on the Democrat side — psychological, financially, in any number of ways.