The Democrat Candidates Are a Mess

RUSH: So the onslaught continues in the Drive-By Media’s incoherent attack, popularized by Laurence Tribe now claiming that Trump wants to reverse the outcome of the Civil War. But the truth of the matter, ladies and gentlemen… The truth of the matter is on the other side of the aisle. Here’s a little story that will never show up in the Drive-By Media. Stephen Green, PJ Media. “Democrats Seemed Bored with Their Presidential Candidates.” You know it’s bad when Joe Biden’s brain surgeon has to come out and assure everybody that Biden’s brain is okay despite the fact he doesn’t know when Martin Luther King and JFK and the others were assassinated.

Joe thinks that happened in the late seventies. So a brain surgeon comes out and says, “No, no, no, no! Joe’s brain is fine. Don’t anybody be concerned about it.” There’s nobody excited. They’re not drawing any crowds. The Fauxcahontas crowd was not 12,000 as reported. It was 5,000. Still bigger than 700. Jay Inslee! Jay Inslee… In fact, this is a warning sign up for Democrats. There is a Democrat who can see reality. We have to take note when it happens. There is a Democrat who obviously looked out there and saw reality and is reacting to it.

He’s getting out of the race, claiming he has no prayer. He’s so far ahead of the game for all the other Democrats, and now he’s gonna work tirelessly — he’s gonna devote everything he’s got — to propagandize (educate) the youths of America on the perils and importance of climate change. But that was his whole agenda. It was Jay Inslee’s whole agenda! We were led to believe that the massive base of the Democrat Party is scared to death and wants climate change. That’s the number one issue they are concerned with — and the first guy to drop out, the first significant candidate to drop out of the Democrat primaries’ number one issue was climate change.

The mess is on the Democrat side of the aisle.

RUSH: Let me get back to something I addressed earlier. It is a story in PJ Media by Stephen Green but actually it is a compilation of Drive-By Media stories. The headline here, “The Thrill Is Gone? Dems Seem Bored with Their Presidential Candidates.”

You know that that’s true when you start hearing people talking about the possibility of Michelle Obama sweeping in at the last minute. And then yesterday, the name of the day yesterday was Michael Bloomberg. Oh, yeah, Bloomberg might come in and save the day, Bloomberg has $50 billion.

When that starts happening, you can be guaranteed that the rest of the field is a giant yawner, and it has been from the get-go. But it was not intended. See, you always have to, if you really want to be on the cutting edge of this stuff, you have to understand the psychology of the left, because it’s what drives much of what they’re doing here.

So you have 23 people at one time seeking the Democrat nomination. What’s the psychology? The psychology is they hate Trump. They are poisoned with hatred over Trump. They also think Trump is a buffoon and an idiot and they think everybody else hates Trump by now. They think everybody has finally seen the light and that Trump is as good as gone. So beating Trump is gonna be easy! It’s a snap since everybody hates Trump. So anybody and everybody who ever dreamed about being president, this is the year to go for it.

So they all sign up, all 20, 23. And then what greets them? (yawning) No excitement whatsoever. For any of them! And particularly when the leader, the frontrunner is Joe Biden, who has never even finished a Democrat primary process before, when he’s the frontrunner? Everybody first thought that Kamala Harris was the Obamas’ chosen candidate. If they really thought that, she never had a prayer. The Obama chosen candidates lose! Ask Hillary Clinton. Ask anybody that’s ever gotten Obama’s endorsement. They do not win.

So if she really was the chosen candidate of the Obamas and The Oprah, she never had a chance. Anyway, she’s fading. She’s down 12 points ’cause she doesn’t know what to propose, how to explain it, how to get over the mistakes that she makes explaining it. She just carries with her a presumption, a presumption that she’s brilliant and that everyone will notice it, and that she has a great pedigree as a prosecutor in California and that she is African-American, even though she’s not, and female and checks off all the boxes.

And she gets greeted with yawns. And then they all do. Jay Inslee. Really? Jay Inslee is the first Democrat who may actually be indicating that they have a foot in reality. He has announced he’s pulling out. He’s pulling out. Now, of all the 20 candidates, Jay Inslee’s number one identity, number one reason for running: climate change.

And now the people that loved him because of climate change, they are so distressed, they are so despondent, they are doubly depressed because their climate change guy lost, which is a double whammy because it says that as an issue it’s nowhere. And yet it’s the number one issue in a lot of these people’s minds, it went nowhere, couldn’t get any traction. None of the others are.

They’re gonna be dropping out like flies here pretty soon. And they’re gonna be left with Plugs and Fauxcahontas and, let’s see, Spartacus, nowhere. They really are beginning to get bored. I would submit that there never was real, genuine excitement about any of these nominees except in the media. So let’s get a little pull quote or two from the story. Now, again, Stephen Green writing for PJ Media. But he’s just quoting other Drive-By Media writers.

And not just Democrats. If it’s true that Trump is universally despised and hated and reviled. “Even after an intense focus on the race by the national media,” levels remain soft. “You can shine a light on Joe Biden, Bernie Sanders, and Elizabeth Warren, but it seems you can’t make any of them shine.” 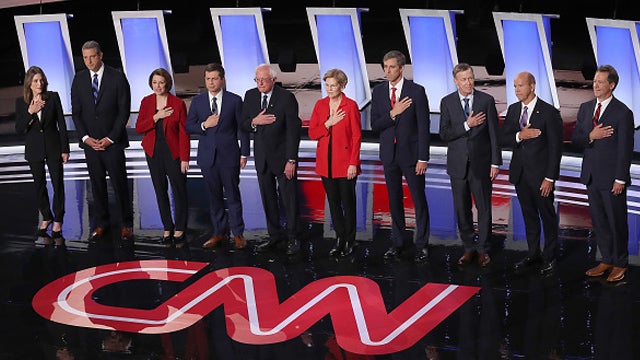 So there isn’t any excitement in a primary season where we’re told everybody hates Trump and can’t wait to get rid of him. And then this guy in The Atlantic, Berman, quotes Portsmouth, New Hampshire, resident Elizabeth Keniston saying, “Whoever can beat Trump is most important. I want him in prison.” Democrat primary voter.

So it makes it “sound like she’s looking for a combination of a presidential winner and an FBI agent. In any case, she’s probably going to need somebody tougher than Slow Joe to put the manacles on Trump. Nevertheless, of Biden she said, ‘I like the other platforms better, but I think he’s the only one the middle of the country might vote for. I usually vote for the person I want. But this year I’m going to be more thoughtful. I look at polls.’”

They all believed all of this stuff. And none of it was correct. None of it was right. And none of these people that believed it have demanded an apology from the media for lying to them or leading them astray. And nobody in the media has apologized. If I had engaged in something like this with you, if I had spent two years lying to you about something and I had known all along that it was a lie and yet I persisted and then a fateful day occurred where it was demonstrated that I had been lying, I would be finished. I couldn’t apologize enough.

If I had openly lied to you, if I had purposely led you astray, if I had manipulated you, if I had toyed with you, if I had led you down this supposed path to utopia and it blew up one day, that would be it, you would be done with me. Why does the American left continue to invest in and tolerate people who have openly manipulated them, openly lied to them, openly misled them, purposely, openly engaged in one of the most outrageous media exercises of lying to the hilt and through the teeth, why do people still invest in ’em?

Then I come and apologize to, you may forgive me, but you’re gonna be finished trusting me. Why does none of this happen? ‘Cause whether the Drive-By Media openly participated in this lie and all of these hoaxes or whether they were tricked themselves, their clientele, their customer base nevertheless continues to invest in ’em.

Now, I know MSNBC’s lost an audience, but that’s not because MSNBC got it wrong. That’s because MSNBC can no longer provide the needed dosage of hatred and the promise that Trump is going to jail. If they can revive that, then people will come back to MSNBC.

But I still think here these people believing everything these lying skunks have told them since Trump was inaugurated. Not a single apology. And no guilt or regret on the part of the media that did all this. And despite all this, is it any wonder why there isn’t any thrill in the Democrat primary roster? What have they got to be excited about? Everything they’ve been excited about for the past two years has blown up in their faces, collectively.