Can Civilization Survive Such Stupidity?

RUSH: Did you see, folks, this picture? Every time I think there’s hope for the country, I see something that raises the threat level and increases my doubt. A woman was on an American Airlines flight with a horse. What do they call ’em when you have a secure horse or a comfort dog or whatever it was?

RUSH: And welcome back. Okay. We still have not fixed this problem and I’m the only one that can describe it. It’s a mix minus problem. I’m hearing myself come back — there it’s gone. Thank you very much. Greetings, and welcome back. El Rushbo, behind the Golden EIB Microphone. 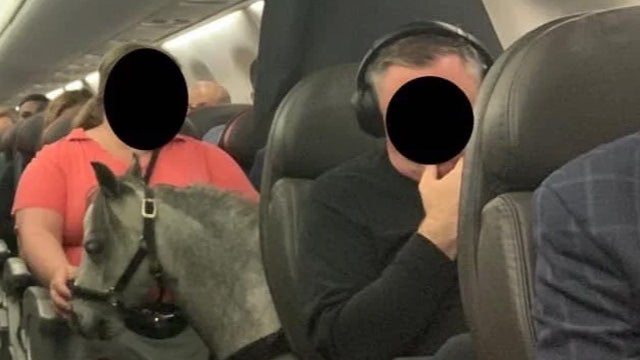 Comfort horse. I don’t have these things, so I don’t – the woman is on an American Airlines flight with a horse sitting in front of her and they let it happen! Now, I know some people, “Mr. Limbaugh, don’t you understand, some people are just severely, severely damaged, and they need whatever comfort.” But a horse, for crying out loud. Does nobody say “no” to anything? Yeah. You know when they say “no”? When you want to say something. If you want to say something that somebody doesn’t want to hear, they will track you down and shut you up.

You remember, folks, you remember that there was a story — this is back in the nineties — when the anti-smoking craze was in full flower. There was a guy smoking a cigarette at some apartment complex. I forget where it was, but it was the East Coast somewhere. Doesn’t matter. He was in his apartment. The windows were closed. The AC was on, smoking a cigarette.

Some woman 200 yards away with her windows closed, claimed she could smell it, demanded that the guy stop smoking! How would she know? There was no way she could, it was a different building! I think it was Maryland. The town jumped in there and made the guy stop and they issued these massive no-smoking regulations.

Well, when you let people get away with that, you’re not solving a problem. You’re starting something. Now people are not being permitted to barbecue hamburgers and hot dogs outdoors because people can smell the scent of barbecuing beef, and it offends them. It offends them and it worries them that they may breathe in some of the fat particles that end up in the air, the atmosphere from the barbecuing, and so they’re shutting people down from barbecuing simply because they don’t like the smell of barbecued hot dogs and hamburgers and so forth.

And of course what’s gonna happen, somebody claims to be offended, somebody complains about it, they go to the offender and they tell that person to stop it and shut it. Yet somebody wants to get on an airplane, a commercial airliner with a horse, and somehow it happens. Some people need to be in padded cells rather than airplanes.

Here it is. “Vegan Woman Demands Neighbour Stop Using Meat on Barbecue Due to Smell.” This story is from Australia. “Frustrated vegan Cilla Carden is so fed up with her two neighbours she has taken them to court over the meat and smoke smells coming from their barbecue. The Perth woman said she couldn’t enjoy her backyard in the suburb of Girrawheen, claiming her neighbours deliberately allow their barbecue meat and fish smells to waft into her yard.”

Yeah, that’s why they’re doing it. They’re not barbecuing that stuff to eat. They want to irritate their neighbor. They are deliberately allowing their barbecue meat and fish smells to waft into her yard. “They’ve put it there so I smell fish, all I can smell is fish … I can’t go out there,” Ms. Carden told Nine News.

She’s a massage therapist. Can you imagine the odors this woman encounters every day just in the process of doing her job?

“The massage therapist has been embroiled in a battle with Toan Vu, his wife and children since late 2018. After her claims were rejected by a tribunal earlier this year on lack of evidence, she applied to the Supreme Court of Western Australia for right of appeal.

She told Nine News she believed her neighbours were ‘absolutely deliberate’ in allowing their smells to cross into her yard. And it’s not just the smell of meat and fish that has made her furious — it’s the smell of cigarettes and the sound of children playing with basketballs.”

So not just the barbecue. Now kids bouncing basketballs offends her, and it’s purposeful, they’re trying to drive her nuts and she’s demanding all the way to the Australia Supreme Court that they stop.

Now, this kind of thing has always happened, but in the past they would tell the complainant to shut up, to grow up, to go inside if you don’t like it. There’s no law against outdoor barbecue or playing basketball outside. But not now. Not now. They listen to these people that are offended.

Man, I remember the days I used to go to a restaurant in New York where you could smoke a cigar after dinner. If somebody sitting next to you complained, they moved the complainant. They didn’t ask you to put out the cigar. Of course, those days are long gone.

Ms. Carden said, “It’s been devastating, it’s been turmoil, it’s been unrest, I haven’t been able to sleep.” The same people — folks, if we’re not careful we’re gonna end up being governed by genuine mental midgets. Some say it’s already happened now.

The same people who’ve told us it would never snow again in New York, that it would never rain again in California, that Hillary would win in a landslide, that tax cuts would destroy the economy, that manufacturing jobs would never return, that Trump colluded with Russia are now telling us that CO2 will destroy life on planet Earth. Yet we can’t get by without it.