Amanpour to Mattis: Is It “Your Duty” to Destroy Trump?

RUSH: James Mattis, who was defense secretary for Trump, has got a new book out. And in this book Mattis savages Biden and Obama and their lack of experience and their total bumbling of the Iraq aftermath leading to the creation of ISIS. He just rips them to shreds in a very classic way. He does it unmistakably but with dignity — and the Drive-Bys are ticked as hell that he won’t talk about Trump. Grab sound bite number 14. Christiane Amanpour talking to James Mattis yesterday. 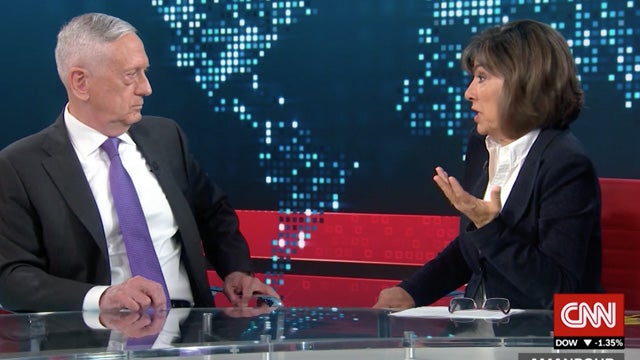 AMANPOUR: You talk about a duty. You’re a military man. Duty and honor are very important in your life and in your career. Do you believe it’s your duty to speak about what you know from the inside before the next election?

MATTIS: Duty and honor, absolutely, are important. And you don’t surrender your oath to support and defend the Constitution when you leave active duty. But, that said, I don’t think right now — for a person steeped in the military tradition in the Defense Department — that I should be speaking up upon things that are political assessments.

RUSH: (impression) “Is it your duty? Is it your duty to destroy Trump since we can’t? We’ve been trying since 2015. You were there. Isn’t it your duty?” Christiane Amanpour. Wait ’til she finds out what the guy said about Obama and Biden. See? She probably doesn’t even know that — or, if she does, she’s in denial about it.

RUSH: Yeah, you gotta love Christiane Amanpour (doing impression), “Isn’t it your duty, isn’t it your duty to destroy Trump since we haven’t been able to. You were there. You saw it all.” Well, Mattis has a book, and the Washington Examiner got an advance look at the thing. Mattis was the secretary of defense for Trump. The new memoir is called Call Sign Chaos.

Mattis thought it was a big mistake to pull out of Iraq in 2011. Most people did. People have forgotten this. Well, you haven’t. Pulling out of Iraq in 2011 is what gave us ISIS, ISIL, however Obama used pronounce it. Without question Mattis was dead set against it. And listen to this little excerpt that the Washington Examiner published.

“’I found him an admirable and amiable man. But he was past the point where he was willing to entertain a “good idea.” He didn’t want to hear more; he wanted our forces out of Iraq. Whatever path led there fastest, he favored,’ Mattis writes. ‘He exuded the confidence of a man whose mind was made up, perhaps even indifferent to considering the consequences were he judging the situation incorrectly.”

He’s talking about Biden here. “Biden reassured Mattis that Maliki,” the guy running Iraq at the time we pulled out, “wouldn’t eject all American troops from the country.” Everybody knew Maliki was gonna do just that. The Iraqis that were running Iraq, you know, the invasion was 2003. Eight years later and an Obama election to president in 2008 changed the Iraqi government profoundly. And remember the Democrats went to town on trying to destroy the Iraq war. They went to town trying to engineer us losing the Iraq war to get rid of Bush.

So they win, Obama wins, and whatever successes that there had been in Iraq were quickly being dismantled. It was part of Obama’s agenda in his campaign in 2008. So this Maliki guy was running the country. Everybody knew that when we got out that they were gonna kick the rest of us out. But Biden knew more than Mattis. Mattis was CENTCOM at the time.

Biden said to Mattis, and Mattis quotes this in the book, “Maliki wants us to stick around, because he does not see a future in Iraq otherwise. I’ll bet you my vice presidency,” and I got the word of a Biden. He didn’t say that, but he said it yesterday so I thought I’d throw it in there.

“Mattis doesn’t say whether he tried to collect on that bet. As he writes, ‘In October 2011, Prime Minister Maliki and President Obama agreed that all U.S. forces would leave at the end of the year.’ Mattis’ warnings proved prescient, as Maliki, free of American influence, went after Sunni politicians and districts, alienating a third of the country. ‘Iraq slipped back into escalating violence. It was like watching a car wreck in slow motion,’ Mattis writes.”

And so while Christiane Amanpour (doing impression), “It’s your duty, isn’t it, your duty to tell us what a fool Trump is?” Mattis is out there writing about what an idiot Biden is in a very, very dignified fashion. And Mattis is only holding back because Trump’s in office. The expectations are that Mattis is not a big fan of Trump. I don’t want to give anybody the wrong assumption here. He told Christiane Amanpour that he’s not going to judge somebody sitting in office at the moment. That’s not the school he’s from.