Andy McCarthy on Your Host, His Book — and Impeachment

RUSH: My buddy Andy McCarthy, his new book, Ball of Collusion, is out. I’ve talked about it. Last night he was on C-SPAN2. Well, not last night. They aired something last night. He actually gave a speech on August 13th in Mountain View. It’s out near the Bay Area. He was talking about his book. Former federal prosecutor Andy McCarthy talking to… They found about, I think, 300 conservatives in Northern California to fill up this place. (laughing) Anyway, here are some sound bites ’cause it’s pretty funny. Here we go with the first…

MCCARTHY: I stepped off the plane and my phone was exploding because it turned out that Rush Limbaugh had talked about the book on the radio today, and he likes it, which is important.

MCCARTHY: If he’s gonna talk about it, you want to make sure he likes it, right? So it’s just been… I was totally blown away by that. I didn’t know he was going to do that. When I got to the hotel, the first thing I did was dash him off a little note to thank him, and he is great. So of course he got back to me instantly, and he said, “You know, there was something I forgot to say, and I’m gonna hit that tomorrow!”

RUSH: Oh, you hear the envy in the crowd? They’re all thinking, “We need to write a book now.” Aw, they were gasping with envy over that. Here is the next. We got three here.

MCCARTHY: While we’re talking about Rush… Married guys will know this. How many married guys in the room?

MCCARTHY: Okay. So one of Rush’s favorite stories or lines is, “If a man’s out in the forest and he’s all by himself — there’s nobody around — if he makes a statement, is he still wrong?”

RUSH: Oh, the audience loved that one too. So it’s a great crowd in Mountain View. This is August 13th, Andy McCarthy. And here’s one more. He gets serious explaining why he wrote Ball of Collusion — which is, by the way, what the Mueller investigation should have been. This book is exactly what Mueller and his team ignored. This book exposes the silent coup, the effort to overturn the election result. It doesn’t… You know, Andy is a brilliant lawyer and federal prosecutor. He writes it almost novelesque. It’s a page-turner. You think you know details because you listen here, but you learn things that you didn’t know. It will outrage you, but it will give you confidence that people are on the case here dealing with it.

Here he is talking about why he did it…

MCCARTHY: I was reminded of that today not only because it’s a great line and Rush was so great today, but because what actually got me into or deeply into the collusion caper, is I was fabulously, spectacularly wrong about something that turned out to be very basic. I insisted eight ways to Sunday — in a very indignant way – that it was impossible, that it would never, ever happen that the Justice Department and the FBI would use what are known as their counterintelligence authorities as a pretext to conduct what actually was a criminal investigation that was done without a criminal predicate.

RUSH: By the way, I can back this up. At the very beginnings of this, when it first became obvious with Strzok Smirk and Page and their texts and their insurance policy and you are this hatred for Trump and McCabe and then Comey started learning these things, Andy early on said, “The FBI would never do this!” He was in the Department of Justice. He was a line prosecutor when Rudy was the U.S. attorney, Southern District of New York. He loves the place. He has a reverence for the Department of Justice.

He could not believe this would happen. He said, “You guys are way, way off the beaten path. This would never happen. The professionals at office would never let it happen.” Then he was stunned to learn that it was the professionals in the office that were directing it. Imagine something that you hold dear, that you believe to be an outpost of propriety, sanity — in this case, judicious and totally focused on maintaining constitutional rule of law — and you find out that it isn’t, it destroyed him. So he did a 180 when he couldn’t ignore it anymore, and that’s why the book.

Now, I want to circle back and connect this to this story about the retirements in Texas and the Democrats taking over as much local government as they can. Andy has a column today about the Democrats’ attempt to impeach Trump based on Jerry Nadler’s announcement that they’re gonna do a deep dive (no pun intended) into Stormy Daniels. (chuckling) Ahem. Meaning they’re gonna do an investigation into Trump paying her off and having a nondisclosure agreement.

Andy makes the point, “There’s nothing impeachable here and there isn’t a crime here! So why are the Democrats doing it?” He makes the point that they haven’t actually called for a vote. Now, this is crucial politically. Because Nadler is out there — the chairman Judiciary Committee is out there — saying that an impeachment inquiry has begun, but he has not put it to a vote. And that means it actually isn’t official, and that means it hasn’t captured the attention of the public at large.

The purpose of it is to feed the beast that is the white, leftist extremist bunch in the Democrat Party who want Trump impeached no matter what the outcome, no matter what the political result — and that he’s gotta do it. The reason that they don’t want to call a vote is this. The reason that the Democrats won the House in 2018 is because they were able to convert a bunch of districts that Trump won in 2016. The Democrats won… It’s a lot of them. So the people in those districts, even though they voted for a Democrat in the midterms, they still elected Trump. 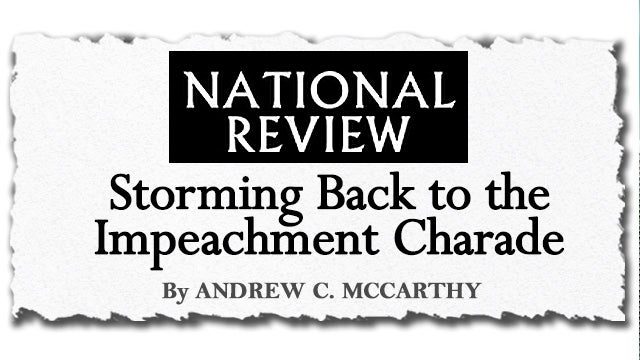 And they can’t force these people. Pelosi does not want to force these Democrats who won in Trump districts to go on the record impeaching Trump because, even though they may have elected Democrats, most people don’t want Trump impeached. They don’t want any president impeached. And there’s no impeachable offense here, and the Democrats are skating with suicide if they do it. So by not calling a vote, all of this is a sham.

Well, focus attention on it, because the people that voted for these Democrats in the midterms — that gave the Democrats the majority in the House — need to know what these Democrats are doing, despite the fact that Nadler hasn’t called a vote. They haven’t had to go on the record with their intention about this. They’re being directed. So Nadler gets to run a show here. The media gets what they want, they get to talk about an impeachment inquiry.

But there isn’t really an official one happening, and there will not be a trial. There will not be a conviction. And this is… Going after Stormy Daniels now, that whole thing which is long ago been adjudicated, is illustration enough. They’ve got nothing. This is nothing more than pure politics with — and Nadler, by the way, is being primary challenged by somebody that Alexandria Ocasio-Cortez has chosen to take him out. So there’s a lot going on.