RUSH: You know, as a professional broadcaster — highly trained, years and years and years of experience — it was just that alone that said, “There’s nobody would do seven hours straight of the same thing,” and I forgot. There is CNN. They are going to do seven hours straight! As a highly trained broadcast specialist with gobs of experience, there’s no way anybody responsible does this. I just assumed that they would spread this out over two or three nights ’cause, frankly… Don’t hold it against me.

I don’t know what’s happening every minute on CNN. In fact, that should earn me a gold star with many of you. But I have now been informed it is indeed (laughing) seven straight hours on climate change! The amount of disinformation combined with ignorance, stupidity, and lying is going to be off the charts tonight. It all starts at 5 o’clock, and I am not gonna be watching. Julian Castro will be interviewed by Wolf Blitzer. Then entrepreneur Andrew Yang, who’s being shunned by the Democrats, will be interviewed by Blitzer at 5:40. 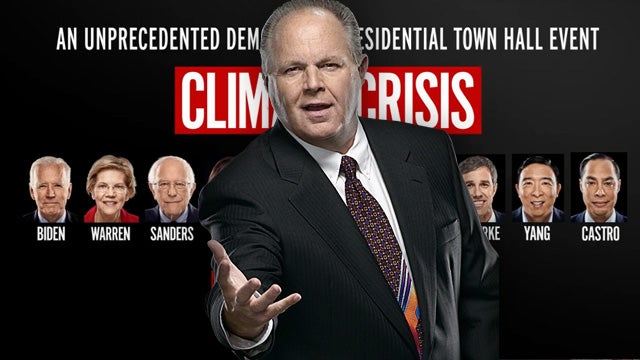 Then Erin Burnett takes over at 6:20 with Senator Kamala Harris. Then she takes over for Amy Klobuchar. Oh, my God! This is… Then Bite Me shows me to be interviewed by Anderson Cooper at 8. (They had to give him time to get up, get ready.) Then Crazy Bernie at 8:40. Fauxcahontas is interviewed… Oh! Look at this. Fredo gets to interview Fauxcahontas and Mayor Pete. Let’s see. This would be… Fauxcahontas goes at 9:20. Mayor Pete a 10. Then Beto. (laughing)

Trump hatred is responsible for what happened in the Bahamas, according — and, by the way, it’s not the whole Bahamas. Don’t misunderstand. I hear from people who say, “Boy, Rush, the Bahamas have been wiped out!” No, they haven’t! Bahamas is huge. Bahamas has all kinds of islands. There were two islands here, Abaco and Grand Bahama where Freeport is, and then there’s really… They don’t talk about this, but there is a (chuckles) terrific place right off Great Abaco called Baker’s Bay. You land in Marsh Harbor to get there.

I haven’t heard a word about what happened there. But it’s part of the Abaco chain. But Nassau and Eleuthera, a number of others were not even touched by the hurricane. I’m not trying to minimize what happened, but the whole of the Bahamas was not taken out. Let’s see. Beto O’Rourke at 10:40 and then Cory Booker… (laughing) Did they draw straws for this? Cory Booker at 11:20 p.m.! (laughing) It’s from 5 p.m. to midnight. I’m gonna have to bonus the audio sound bite staff. (laughing) Oh, my goodness. They’re gonna need medical care after this, psychological therapy.