RUSH: I had some audio sound bites in the roster yesterday that I didn’t get to, and I asked Cookie to refurnish them today because they… Ah, they’re entertaining, they’re interesting, and they provide jumping-off points. Some of them are about me. I don’t like to make this program about me, as you well know. It’s why I’m saving these until the final half hour of the busy broadcast today. Now, first, we’re gonna go back to August 26th on a program called PMSNBC First Look. This is the co-founder of Axios, Mike Allen.

Now, I gotta tell you, I like Mike Allen. Mike Allen is one of… I can count ’em on one hand. He is one of the five Drive-By journalists who in my career has been fair to me. He even… (chuckling) During one period of controversy when I made above the fold at the New York Times, he sent me a congratulatory note. (laughing) “Hey, way to go! Way to make the news about you.” I said, “Well, I didn’t try.” But that’s… You know, when you make the top of the fold New York Times, you are cooking. Most people don’t want to be above the fold of the New York Times. 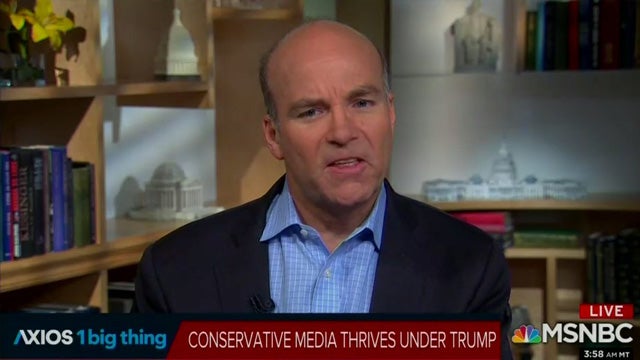 Anyway, he was one of the co-founders of Axios, and I’m telling everybody I like Allen because I laugh at this website. But you can’t blame ’em. They know the relative lack of education of their audience. This is the website where they do stories with the first paragraph, and then the next paragraph says, “What it means.” Clearly, they believe that their readers don’t know without having a paragraph explained to them or what the ramifications might be. I find it amusing.

It’d be like me saying something and then saying, “Now, folks, let me tell you what I just said.” But anyway, he was on this PMSNBC show, and he’s puzzled by something. He’s puzzled that conservative media (i.e., me) is thriving under Trump. See, these people believe… I can’t tell you the number of people, even who have been on the staff in a remote location version of this show. When Clinton was leaving office, I had people saying, “Oh, man, you’re gonna have your work cut out for you now.”

I said, “What are you talking about?”

“Well, you’re losing Clinton to talk about. What are you gonna talk about?”

I said, “You work here, and you don’t get it!” These Drive-Bys think that my success is ’cause Clinton got elected. They don’t realize that I started with 56 stations in 1988, and before Clinton even ran for office, we were up to 500. There were four years before Clinton got elected, and that’s when this program was cemented. But these people all think that programs like this thrive when the enemy is office, and that we fade away into obscurity when our candidates win because we’ve got nothing to complain about.

Now, it’s a view that they all hold. It’s a crowdsourced view. It is based on cliches and assumptions, and it… You know, I’ve often had a phrase: My success doesn’t depend on who wins elections. I can’t control who’s gonna win elections anyway. The whole objective here is to have a good show, regardless who’s in the White House or not. By the way, just because your team wins doesn’t mean they don’t screw up. Anyway, he’s shocked by this, and I think this is telling. He is one of the deans.

This guy is one of the major players in Drive-By Media, and still doesn’t understand why programs like this are a success. It goes back… I’m telling you — and I don’t mean to be critical of Mike Allen. But it all goes back to whether people can connect and have a bond with an audience, and those who don’t — and those who don’t, don’t understand it. That’s why they don’t understand Trump. They think they can drive a wedge between Trump and his voters just by ripping Trump to shreds. They know they’re strengthening the bond, that they are strengthening the association.

Anyway, here are his own words, what he said…

ALLEN: Conservative media is thriving under a Republican president, and this reverses the history. Rush Limbaugh, of course, rose under President Clinton, became famous. Fox News, founded during the Clinton years. But with Trump we’re seeing that a lot of conservative media is both getting new traffic and expanding their staff. And of course across the Web the big conservative voices, ones that want to be anti-Trump have proved to be a tough business model in this era.

RUSH: Not only… He said the Never Trumpers are dying, the Republicans are ripping Trump. But not only that, the Drive-Bys are dying. Look at all the Drive-By newspapers that are closing! Look at the lack of audience at CNN and MSNBC. Their theory is they should be thriving because their enemy is in the White House, and they got nothing to do but complain and rally the troops. He genuinely is puzzled that programs like this are succeeding with Trump in the White House.

Now, you have to have an insufficient understanding of programs like this and why they’re successful if you think that. And if you have preconceived ideas about how media works, then that’s what you’re going to end up thinking. This program… I can’t tell you the number of people who believe that this program rose to its current heights because Bill Clinton won the election. This program got off the ground and became the most listened to radio talk show in three years before Bill Clinton ever thought about running for office. 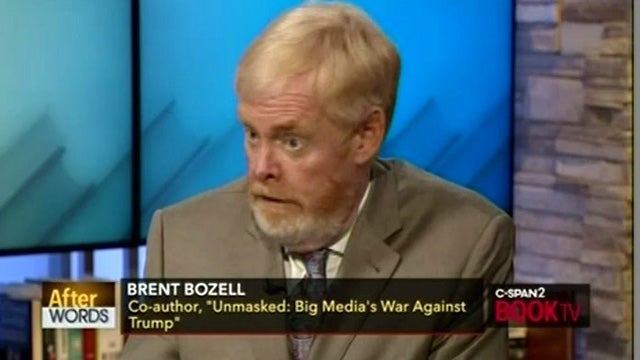 Anyway, enough of that. What’s next in the list here that I wanted to hold over? This is… Oh-ho! This is great. Brent Bozell. This was on August 24th. He was on C-SPAN’s show called After Words. I’ve never heard of that show. After Words. Oh, Afterwards! Afterwards. But it’s “After” and then the word “Words.” Carrie Sheffield, who is the Accuracy in Media national editor, is interviewing Brent Bozell of the Media Research Center (he’s the founder) about media coverage of Trump.

ALLEN: There’s a fallacy that says that business trumps politics. It doesn’t. Politics trumps business when it comes to the news media. CNN has had an endless number of presidents in recent years. One of them was someone I knew and I called him. “Get on CNN 1 or whatever your aircraft is. Go to Palm Beach, bring a checkbook, ask around, try to find directions for this guy Rush Limbaugh’s house. Go to his house, knock on the door, open up your checkbook, sign it — a blank check — give it to him. Tell him he could fill in for whatever amount he wants and do whatever he wants. And in one week, you’ll have the number one network on television. That’s all you have to do.”

RUSH: That’s August 24th. His point here is that here’s CNN sitting there dying. They’re thinking that this is what their audience wants to hear, this never-ending anti-Trump stuff. But how big is their audience? You can put it in a phone booth or a thimble. His point is that these guys like Mike Allen and others, they’re sitting here looking at the success of conservative media, and they’re puzzled by it. But where is the business angle? Where is the attempt to get in on it? There is none! There’s no attempt to get in on it. 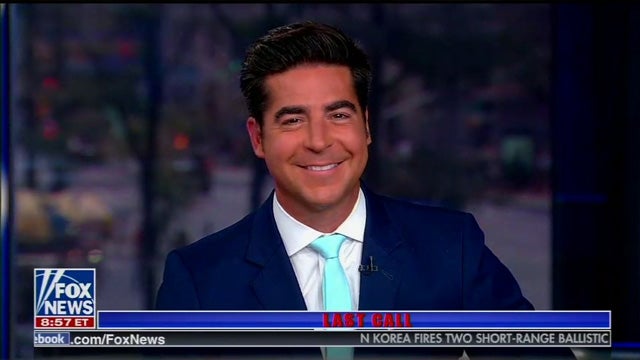 All they want to do is try to ream it, criticize it, and destroy it. If I were a liberal, I would have a fleet of jets all paid for by CNN. At any rate, it’s a good point. Rather than… That’s what his point is. They are putting politics over everything, politics over business, politics over profit, political purity and so forth. Here’s Jesse Watters. We talked about him last week. He had chided Dana Perino for not hearing something really, really good and clever on this program about Trump’s new press conferences. He said, “Dana, you can’t listen to it because your show’s on the last hour Limbaugh’s on, and so you miss it.”

So I’m telling people this story, and Jesse Watters on August 24th decided to talk about it.

WATTERS: Yours truly getting a shout-out from El Rushbo. Watch.

RUSH ARCHIVE: Jesse Watters. This was on The Five yesterday afternoon on the Fox. And Dana Perino, she’s got her own show from 2 p.m. to 3 p.m. As such, she misses a significant part of the busy broadcast day by missing this next hour of this program, and that’s what Jesse Watters said to her yesterday. … Jesse Watters obviously listening to the program yesterday and advising Dana Perino what all she was missing. But, you know, it bears repeating.

WATTERS: It does bear repeating. Doesn’t it, Rush? And you’re welcome on Watters World any time. We’d love to have you. The door is always open. 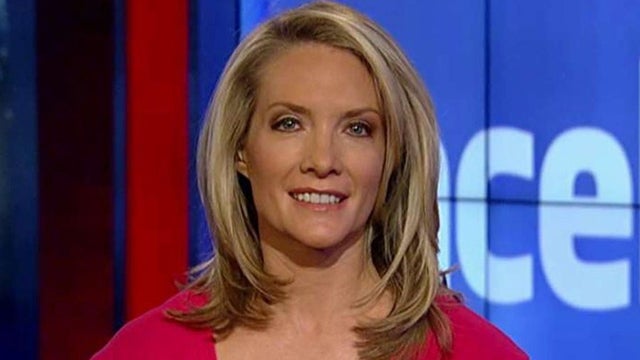 RUSH: Jesse Watters. He’s a great, great guy. I remember I made a speech for Turning Point USA last December 20th at Mar-a-Lago, in the ballroom at Mar-a-Lago. Jesse Watters was there. He was in the audience. One of the themes I talked about was encouragement, that everybody needs it, even people you think don’t possibly ever need it, that encouragement is good for anybody any time. Not just your kids, but your spouse and your friends and so forth.

He came up to me after the speech and said, “Man, that’s a crazy. You need encouragement?” ‘Cause I’d talked about how people encourage me. And he was saying, “You need encouragement? I can’t imagine that.” I said, “Yeah, we all do.” But anyway, he’s a great guy. That was the first time I’d met him, and I knew… I knew when O’Reilly gave him a camera that (chuckling) the days were numbered for O’Reilly. I mean, I just knew it.