What’s Rush Limbaugh Gonna Do About This?

RUSH: Audio sound bite number 1. Grab that please. This morning Fox & Friends on the Fox News Channel. We have the news infobabe Carley Shimkus reporting about a couple who were almost kicked out of a Major League Soccer game for flying the Betsy Ross flag in Utah.  Utah.  I am not kidding.  This happened in Utah at a Real Salt Lake game and here is the sound bite. 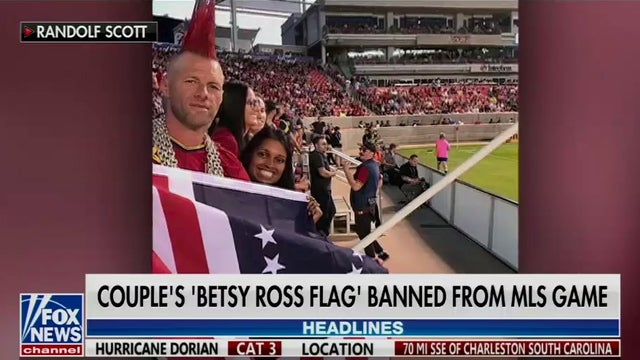 SHIMKUS: A Major League Soccer team threatens to boot two fans from a game for flying a Betsy Ross flag. The couple put the flag away, but they say they were being patriotic at the Real Salt Lake game.  The team claims the flag has become “a symbol for hate groups.” They say any controversial flags or symbols, signs or symbols of hate are banned. The Betsy Ross flag thing —

KILMEADE: Unbelievable. Our first flag is now “a symbol for hate groups”?

DOOCY: All right Carley. Thank you.

EARHARDT: Where’s Rush Limbaugh? What’s he gonna do about this one? 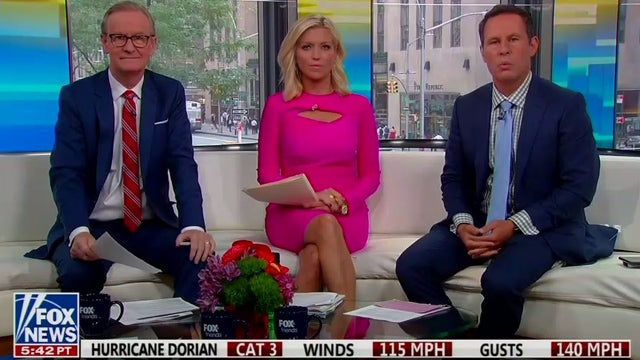 RUSH:  “What’s [Rush Limbaugh] gonna do about this one?”  Yes, it’s interesting.  I just tell you this.  As you know, we have the Stand Up for Betsy Ross T-shirt that’s been on sale at the Rush Limbaugh Store at RushLimbaugh.com since late July/early August.  We have a charitable participant here, the Tunnel to Towers Foundation.  When I last told you about this… I don’t think I’ve given you a recent update.  We have sold enough T-shirts to generate $3 million in donations.  A portion of the proceeds go to Tunnel to Towers, and $3 million has so far gone to Tunnel to Towers.

We’re not finished by any stretch.  We bought up every blank white T-shirt of the style exclusive to us and to this show. We bought ’em all up, and our vendor has been printing around the clock actually making the shirts.  We’ve been shipping them out.  We took a break during the hurricane ’cause we had to get outta here.  But I’m just gonna say this.  We’re up to over 300,000 Betsy Ross T-shirts.  Stop and think about this: This is a $27 item. We have sold — you have purchased — enough $27 items to generate $3 million in a charitable donation to Tunnel to Towers.

Now, people have said, “Is it over?”  Well, we didn’t have a hard end time for this because it kind of just sprung up spontaneously.  This happened over the July 4th weekend.  That’s when I’m sitting here, watching the news. You know, Nike puts out the Betsy Ross shoes. Colin Kaepernick said, “I don’t like those,” and Nike says, “Oh, Colin doesn’t like them so we’re not gonna sell ’em,” and then the women’s soccer team came out; started trashing Trump and trashing America, after winning the women’s World Cup.  I said, “Well, hell’s bells!”

So we created this. I asked Kathryn. I said, “Can we get a shirt turned around real quick, ‘Stand Up for Betsy Ross’ with the Betsy Ross flag on it?”  And within four days, we were on the air announcing the sale of the shirts — four days — on July 8th.  So that’s when it all began.  And it exceeded everybody’s expectations.  We had no idea.  I’ll be honest: We would have been thrilled if 50,000 T-shirts have been moved.  Now we’re up to 300,000.  So I’m just gonna say this: Watch Fox & Friends tomorrow and listen to this program tomorrow.

Frank Siller, who is the director of the Tunnel to Towers Foundation, is going to have a segment on the Fox & Friends show.  I don’t know what time.  When I find out what time the segment is, I’ll pass it on to you.  He’s going to appear, and there will be an announcement.  Now, you might be asking, “Well, why aren’t you going to be on TV making the announcement?”  Because, folks, TV… I’m too famous. Yeah. I like anonymity.  The more I’m on TV, the more people recognize me, and I’m trying to go low key here.  I don’t want to hog all of this.

So we’ll do the announcement on the radio show as well, but it will be previewed on Fox & Friends tomorrow.  But the program will go on — and now this?  Here are the details this:  “A couple in Utah waving the 13-starred Betsy Ross flag at a Real Salt Lake soccer game was told to stash their American banner or risk ejection from the game by stadium personnel. Randolf and Diana Scott,” the couple, “consider themselves to be superfans of the Major League Soccer team in Salt Lake City and suggested that the flag was just a part of their normal expression of fandom in the stadium.

“‘Soccer is just a big part of our life,’ Diana said of their head-to-toe Real attire. The couple said that the American flag has long been a part of their expression when attending soccer games but that the Betsy Ross flag was indeed a new addition. ‘Diana bought it for me actually, because my other flag was kind of old and falling apart,'” the husband said. “The flag, which was designed by Betsy Ross at the start of the American Revolution in 1776, represents the original 13 colonies in a circular pattern along with the 13 bars and stripes still represented on the flag today. 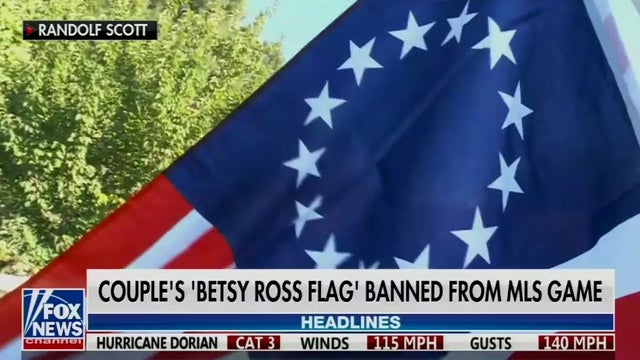 “The vintage design has recently been the subject of controversy as some outlets have asserted that it is associated with hate groups. Nike recently halted production of sneakers that were intended to don an image of the flag. ‘They kept telling us if he wasn’t going to take it down, we were going to be rejected from the game,’ Diana Scott said of the couples attempt to wave the flag at a Real Salt Lake game. Stadium officials claimed the flag was a ‘symbol for hate groups.'” How in the world can it be associated with hate groups?  So we create this T-shirt as a way for people to push back against this nonsense — and man, oh, man, did you respond.  So that’s that.  That’s the latest on that. (sigh)

RUSH:  I got an email from the famed actor and director Nick Searcy, and Nick Searcy said, “I got one question about this story out of Salt Lake City and the Betsy Ross T-shirt.  What the hell are two Americans doing at a soccer game?”  (chuckling) Just kidding.  No, he said it.  But we’re just kidding.