RUSH: Speaking of fake media, let me explain this. This is distressing for me to have to tell you this, but I can’t hide behind this. We can’t ignore this. For the last three weeks, the Drive-By Media has been insisting that we’re on the verge of a recession when we are not. We are not anywhere near a recession, but yet the Drive-By Media — doesn’t matter which one you want to talk about — ABC, CBS, NBC, New York Times, Washington Post, MSNBC, CNN, take your pick, they have been relentlessly forecasting a recession. They have been telling people that we’re on the verge of it.

We have been sitting here telling people, “No, we’re not.” The Federal Reserve chairman came out Friday of last week, Jerome Powell said we don’t see a recession in the future in the next 12 months here at the Federal Reserve. And that should be the final authority on it. And yet the Drive-By Media has persisted.

And so today we have a poll. ABC/Washington Post poll conducted by landline and cellular telephone September 2nd through the 5th in English and Spanish, random sample, 1,003 adults, margin of error, three and a half points. The partisan division, 28% Democrat, 24% Republican, 37% independent. And I need to stress this is not likely voters. This is a random sample. Trump approval drops by six points. Sixty percent of this sample say a recession is likely. 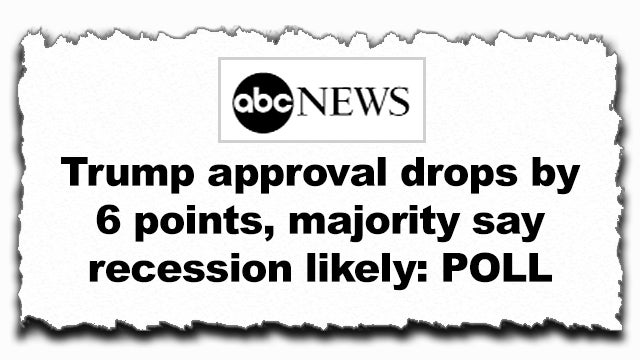 After three weeks of the Drive-By Media just lying through their teeth guaranteeing a recession, promising one, assuring everybody we’re on the verge of one, they succeed in convincing 60% of a supposedly random sample of people that a recession is likely. Here’s how the story from ABC is worded.

“Six in 10 Americans say a recession is likely in the next year and as many are concerned about higher prices because of the trade war with China, helping to knock 6 points off President Donald Trump’s job approval rating in the latest ABC News/Washington Post poll.” And note Trump’s trade war with China.

“Trump fell from a career-high 44% approval in July to 38% now,” and CNN has been all over this today. They just can’t stop talking about it. They’re orgasmic talking about this. Just like when George Bush’s numbers got down to the thirties it was breaking news every 10 minutes for five straight hours on CNN.

So they’re looking at job and mission accomplished here at the Drive-By Media. Sixty percent claim that we are likely headed to a recession. And if you just went and asked a thousand people on the street and you take this three weeks of news saturation about it, you’re not gonna have answers anywhere near this. ‘Cause most people off the top of their heads don’t have — in fact I’ll tell you what’s going on. Most people in this country are probably doing well, but they hear news like this and they think there’s a lot of other people suffering. “Oh, it must be bad out there. I’m doing okay, but I’m worried.”

Fake news leads to fake polls. Both intended to scare people into making decisions contrary to their best interests. The Drive-By Media and the Democrat Party made no bones about it. We had the audio sound bite yesterday. They’re actively rooting for a recession. They are actively rooting for an economic downturn for a host of reasons, among them, to get news stories like this published and broadcast. Because they think it’s gonna do great damage to President Trump.

So we’ll keep a sharp eye, but I just wanted to alert you that this is the objective. Three weeks and they were able to pull it off. And there’s no recession, folks. There isn’t a recession. There’s nobody with any serious economic credentials looking out to the future and thinks there’s a recession. The Democrats did this in George Bush’s second term. They talked everybody into believing that there was a recession, and that we were losing the Iraq war, that we should lose the Iraq war, and that we were losing the global War on Terror. It’s stuff like this that is why Trump refers to the media as the enemy of the people.