Never Give Up, Folks! The Stand Up for Betsy Ross T-Shirt in Royal Blue

RUSH: Now, folks, as you well know, the American flag is the most fundamental, apolitical symbol of our country and its history. Our flag represents so much. It represents independence from tyranny. The flag stands for and represents unity, freedom for everybody. It represents ingenuity, strength, perseverance. The American flag in its original rendition by Betsy Ross — an American hero. She was an early leader in business and in design.

And there is no earthly reason why Betsy Ross should be politicized or belittled, and there’s no earthly reason for the American flag to be, either. Betsy Ross isn’t political. The American flag isn’t political. The very idea that people want to politicize both is kind of sick. It’s kind of absurd. I’m just gonna tell you something. You know what? It’s a sign of weakness, and it’s a sign of people who I think are grasping. I think the Democrats going ahead with this impeachment business…

I think they’re telling us that they are pretty sure they’re not gonna win at the ballot box. If they were confident, if they really believed that they were gonna topple Trump, they wouldn’t be wasting time with this. It’s a distraction from their own campaign. But the fact that they’re going through with it? You’ve gotta see it for what it is. Well, I think throughout the country the left is reeling. You just don’t get that picture because it’s not reflected in the Drive-By Media.

Now, around the Fourth of July this year, I don’t know about you (but I think I know about you), I just got fed up. I got tired of people like Colin Kaepernick and Nike and others essentially saying that there was a problem with our first American flag. Nike’s gonna do some tennis shoes on the Fourth of July, they’ve got the Betsy Ross flag in the back, and Colin Kaepernick says, “I don’t like that flag! You — you — you shouldn’t do that,” and Nike says, “Okay! We’ll shelve the shoes. We will not sell ’em.”

So they launch an attack on the original American flag, an apolitical thing — and Betsy Ross was not political. So you know the story. We came out with a Stand Up for Betsy Ross T-shirt as a way of saying, “Enough is enough,” and we invited you to be part of the campaign. So we started manufacturing Stand Up for Betsy Ross T-shirts on some of the greatest T-shirt fabric you have ever felt, some of the greatest you have ever experienced — and we would have been thrilled if we could’ve sold 50,000. That was the original goal.

If we could have sold 50,000 of these things, we would have thought, “Wow, this is solid. This is cooking.” We came up with a charitable tie-in, the Tunnel to Towers Foundation. It’s a wonderful foundation started by Frank Siller who lost his brother. He was a firefighter killed while responding to the World Trade Center when our country was attacked on 9/11. Tunnel to Towers does a lot of great work for first responders, for military people killed in action, their survors, their families.

Thanks to you, we are so far ahead of 50,000 T-shirts. We are over 300,000. Folks, we moved 25,000 shirts over the weekend with just one little casual mention on Friday. (chuckles) We’re on the verge of being sold out of our first, original stock of the new blue — the new royal blue — Stand Up for Betsy Ross T-shirts. Thanks to you, we have been able to donate over $3 million and counting to Tunnel to Towers — and, as I say, they’re using the money to pay off mortgages for families who lost a father or mother in service to our country.

They’re building new, medically equipped homes for Americans who were gravely injured in war. So far, 18… Stop and think of what you’ve done, here. Eighteen mortgages have been paid off in full because of you purchasing a $27 item. The proceeds go to Tunnel to Towers. This is not a profit center for the RushLimbaugh.com store. This campaign has been so incredibly successful. We’ve got a vendor in Pennsylvania, a small American business we partnered with who prints the shirts. That’s all this guy has been doing since this got revved up.

This guy, he’s running his business 24/7 to fulfill the demand. We send him the blank shirts. His company prints them; ships them back. Trucks arrive at our warehouse every day delivering the finished product. We had no idea how long it was gonna go. We had no idea it was gonna go beyond 50,000. There’s no end in sight. People are fed up. They want to push back. They want to unify. They want to have something in common where they can all send a signal to each other that they’re pushing back and not standing for this politicization of the American flag and of the American founding. 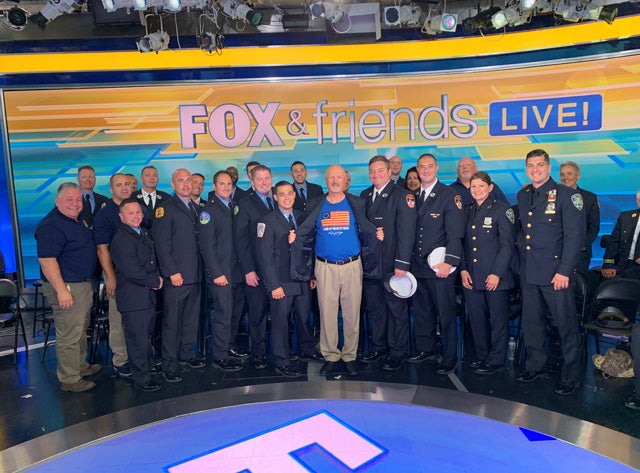 The attempt to undermine it, to impugn the flag and Betsy Ross all because some out-of-work quarterback doesn’t like the design. So we are thrilled to announce that due to popular demand and in honor of 9/11, which is tomorrow — the most devastating terror attack on American soil — we now have the Stand Up for Betsy Ross shirt in a stunning royal blue fabric. You can see it at RushLimbaugh.com. Click on the “Store” tab. It’s for a limited time, ’cause they’re going. (chuckles)

As I say, we moved 25,000 in just a couple days over the weekend. We have the royal blue shirt is available in all sizes. And we’re scrounging up all of the royal blue fabric and shirts we can find to meet what we know is going to be a continuing demand. It’s a simple way to stand up, defend America, defend Betsy Ross, defend America in honor of our first responders and their families — all American heroes who have sacrificed so much for our freedom.

We can’t give up, folks. We can never give up our uniquely American symbols. We cannot give up our fundamental, patriotic institutions. We cannot give up or allow the dilution of the foundational building blocks of the greatest country on earth. If you want one of these shirts or if you want to buy some to gift them, it’s simple. RushLimbaugh.com is the website. Click on the “Store” tab. You’ll be taken right to the RushLimbaugh.com store, and you can see the brand-new, royal blue Stand Up for Betsy Ross T-shirt.

The white one’s still on sale too. Take your pick.

I’m eager to announce the amount of money raised in the near future. It’s over $3 million since July 8th on a $27 item. You’re gonna see photos of Americans just like you from every single state wearing their shirts. We urge people to take photos and send them to us so we can post them at RushLimbaugh.com. We thank you from the bottom of our hearts. The bottom line here is to tell you that the demand continues. We’ve had requests for certain things. So we’ve added a color: The royal blue Stand Up for Betsy Ross T-shirt.