RUSH: The Washington Post has a story: “Trump Pushing for Major Crackdown on Homeless Camps in California, with Aides Discussing Moving Residents to Government-Backed Facilities.”  Let’s see here.  One, two, three, four journalists on this story.  Now, I’m sure many of you are recalling at this very moment that it was I, El Rushbo, who said that it would be a great idea for Trump to go to California.

Not to try to win the state, but just show the flag.  It’s a one-party state.  It’s a one-party media state.  Simply go to California and tell the people there that life doesn’t have to be that way!  This homelessness in LA County… Actually, forget the county. It’s downtown LA.  There’s a police department right near skid row.  It’s become a tent city.  Folks, do you know what’s happening?  Diseases that we have cured are popping up, like the Plague and some other things. They may be popping up in these homeless shelters in these tent cities because there are people there that have come in to the country illegally as well.

I mean, it is a potential festering cesspool, and I first became aware of it when the Democrat leadership of Los Angeles started complaining after the first Democrat debate that none of the candidates… Remember, there are 20 of ’em. None of them talked about the problem of homelessness in Los Angeles, or San Francisco, or California at large.  So I very shrewdly pointed out to them, “They’re not gonna talk about.  Why should they?  They own the state of California.  They’re not gonna talk about homelessness in LA.  Why focus on a problem in a Democrat state?  Why call people’s attention to a problem they have made possible that they have grown and that they can’t fix?

You know, not with the crazy idea of winning the state, but at some point, you have to start making a move there.  Others think, “Nah, Rush! California is gone.  What we have to do now is make sure there aren’t any more Californias.”  Well, they’re trying to make Texas a new California, and they’re doing this with open borders, immigration, rampant poverty, which creates dependence on government at all levels.  This is what the Democrats are trying to do.  That’s gotta be stopped.

That’s why Trump ought to go, and I think… Well, let me just say this is a great idea, “Trump Pushing for Major Crackdown on Homeless Camps in California … Discussing Moving” them out of these tent cities and into “Government-Backed Facilities,” for the purposes of public health if nothing else.  I wish I could remember… It was either yesterday or Monday there was a story about some specific disease.  I think it was the Plague.  I know the Plague was mentioned, but I don’t know what else.  There was one other that we’ve cured! 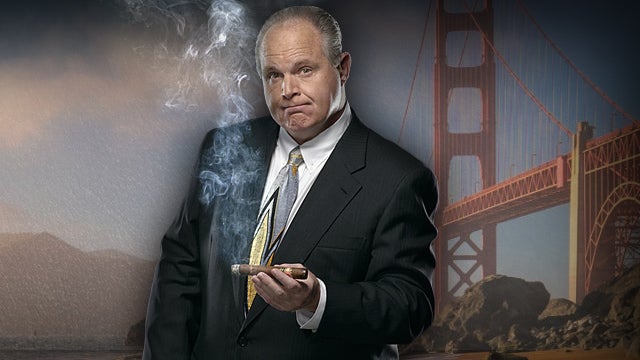 It is not a problem in the United States, but it has surfaced in one of these tent cities in California.  So for health reasons alone the president ought to do this.  I applaud this.  The Washington Post claims anonymous sources told ’em yesterday President Trump’s pushing the effort here to address the homelessness situation in California.  Politically, folks, it makes all the sense in the world.  The Democrats can’t talk about it.  I don’t know about you.  The only time the Democrats talk about homelessness is when there’s a Republican in the White House.

You didn’t hear about homelessness when Obama was president.  So now Trump’s gonna go out there. Since the Democrat candidates can’t — they can’t talk about it — Trump will.  I like it.  I hope that it does happen.  Let’s see. They “have discussed using the federal government to get homeless people off the streets of Los Angeles and other cities and into new government-backed facilities… Among the ideas [supposedly] under consideration are razing,” r-a-z-i-n-g, tent camps. Not building them but replacing them, destroying them and replacing them with “new temporary facilities and refurbishing existing government facilities…”

Now, the ACLU won’t permit — the reason the left doesn’t really want to clean this up, you know why? Why would you think, Mr. Snerdley? Why do you think the left loves homelessness, tent cities? Because to them they can point and say, “See, capitalism doesn’t work, look at these people.” That’s exactly why. They’ll look at all poverty, they’ll look at all degrees of people living in poverty or degrees of being peer and they’ll they say, “See? This is what capitalism does.”

That’s why they don’t fix it. Not to mention they don’t want to call attention to their own policies is the reason. The homeless are meant to show us every day what a failure capitalism is. The Washington Post says this all part of an effort by Trump to shine a light on the problems of California under Democrat leadership. Well, hell’s bells. Can’t deny that that’s true. It’s not just Washington Post. Breitbart has that story. So there must be something to it.

RUSH: Leprosy is the other disease that has been discovered in these tent cities. Leprosy. We have cured that in the United States. Leprosy is not just a place where you put people with the disease and forget about ’em and they have this odd physical appearance. You can lose toes and fingers with it. It’s a deadly, horrible disease. And we wiped it out in the United States and a large part of the world, but not everywhere.

And they have seen evidence that it might be — I don’t know what the medical term — not present, but they’re concerned about it in parts of California, and typhus as well. All these things we’ve wiped out. And the open borders crowd says we don’t deserve to have wiped them out if the rest of the world is still suffering from them. And folks, not making that up. The American left today: “Okay, we’ve wiped out leprosy, but it’s not fair! We should still be getting leprosy if they’re getting it anywhere else in the world because it’s our fault they still are.” It’s just sick.