RUSH: In the meantime, here’s Beverly, Torrington, Wyoming. It’s great to have you on the EIB Network. Hi.

CALLER: Hi, Rush. I am so excited to talk to you. I just wanted to let you know that I’ve received my new, blue Stand Up for Betsy Ross T-shirt just a few minutes ago.

RUSH: The flag really pops out of that blue one, doesn’t it?

CALLER: It does. It stands out more. Yes. So I just wanted to let you know. I had two excitements today: Talking to you and getting my new T-shirt.

RUSH: Look, I can’t thank you enough. You’re one of hundreds of thousands of people who have participated in this.

RUSH: You’ve helped us be able to direct $3 million and counting to Tunnel to Towers Foundation, and you’re pushing back on this, this whole idea. One guy! One guy, Colin Kaepernick, stands up and tells Nike, “You can’t sell those shoes! I don’t like the American flag.” So Nike pulls the shoes — and, all of a sudden, Betsy Ross and the flag become political! Well, not here. There’s nothing political about the flag or Betsy Ross. So I’m so moved and excited about all of you that have participated in this — and it’s icing on the cake. Oh, before you go, Beverly, tell me what you think… I know it’s a setup, but I’m gonna ask anyway. 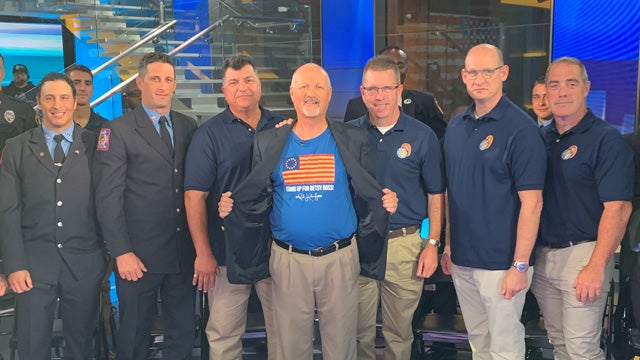 RUSH: What do you think of the fabric of this T-shirt?

RUSH: It’s not like any other T-shirt you have, probably, right?

RUSH: You could wear this with a sport coat, folks. Frank Siller does on Fox. He puts the T-shirt under his sport coat. It’s that classy, the material is.

CALLER: It is very nice.

RUSH: Well, I’m glad. I appreciate that ringing endorsement, even if I led you into it. She could have said no. She could have said, “Rush, it’s nothing special. I like the shirt, the fabric.” She could have said it, but she didn’t. (interruption) Mr. Snerdley just told me that he’s getting a lot of feedback on the interview we did with Frank Siller yesterday. That really was touching. You know, Tunnel to Towers, I was surprised by how many people didn’t understand the name.

Tunnel, they didn’t get. Towers, yeah. And it was all about the fact that he was on the way to play golf with his brother. And they got the news that the towers were hit, his brother’s a firefighter, he turned around. The Brooklyn-Battery Tunnel ends up being closed, getting out of it was a mess, but his brother Stephen went from the tunnel as a fireman, off duty, to the towers to try to help rescue people and was killed in the process.

So that’s the name, that’s the germination of the name, Tunnel to Towers Foundation. But you know why that interview was good? Aside from the fact that I was the one conducting it. The interview was good because Frank Siller is completely devoted and passionate to this, and you could tell that everything he was saying came right from his heart, everything. His appreciation for all of you who are participating in the Stand Up for Betsy Ross T-shirt movement, to the things they’re able to do to help people as a result of it.

I mean, stop and think about it, folks. A $27 item and Tunnel to Towers has been able to pay off 18 mortgages for the surviving families of people that were killed in 9/11, first responders and even military people. And that number is continuing to expand because the T-shirts continue to sell in just amazing quantities at an amazing rate. 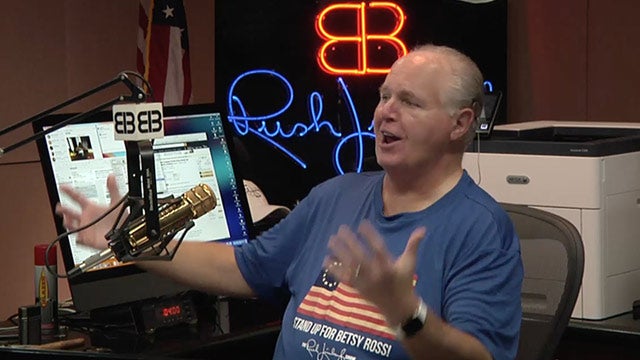 Oh, I need to clarify something. And, again, this is because I don’t want to mislead anybody. I often praise and brag about the packaging that we send items purchased at the Rush Limbaugh Store, the EIB Store at the RushLimbaugh.com website. I rave about the packaging. And I should have specified that it takes an order of I think it’s three shirts to get a box delivery.

Now, the box delivery, when you see the way we ship this stuff, you’re gonna think about giving it away. The same thing with the way Boll & Branch does theirs. But if it’s just one T-shirt, we don’t use the whole box system because it would eat up all of the expenses. It would put the expenses way beyond the price. So, some of you have not received a box even after hearing me brag about it, and I have neglected to explain why it is.

It takes an order of three T-shirts or more or a T-shirt and some other items, whatever it is. It takes more than just one shirt before we’ll pack it in a custom Rush Limbaugh Show Store box. And I don’t want anybody to be disappointed if you buy a single shirt and it comes in the standard polyethylene bag.

It’s just an expense thing, and it’s just trying to make sure that there is a, quote, unquote, not profit ’cause this isn’t a profit pursuit, but that there’s enough after expenses to be able to send to the charity. And so I needed to specify that. ‘Cause there are people, “Rush told us that it would be a beautiful presentation, and we didn’t get a box! We just got this clear plastic bag.” My fault. My bad. So I had to clarify that.