RUSH: I left yesterday’s program teasing you with this headline. It’s from the U.K. Daily Mail: “Fury Over Fading Benefits of Solar Power as Thousands Complain to Finance Watchdog — They were promoted as the eco-friendly way to generate both electricity and [save money] at the same time. But now thousands of homeowners who bought solar panels have complained that they’re not reaping the rewards they were promised. 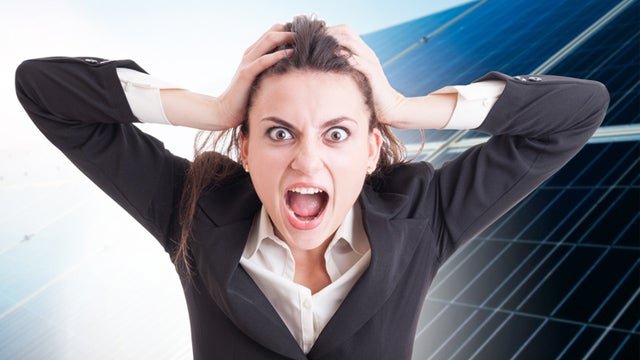 “The Financial Ombudsman Service has received 2,000 complaints and Barclays has put aside millions to compensate those who took on costly loans to pay for mis-sold panels” that are worthless. See, these people bought into this climate change crap. They bought into the promises. They bought into the idea, “You put a couple of solar panels on the roof, and you won’t believe the savings! I’m pretty sure the power company’s gonna be driving up and giving you money. That’s like how much you’re gonna save. Your energy is gonna be cleaner.”

They’re finding out they can’t heat their homes. It’s not working, it doesn’t make a hell of a difference, and they’re not saving any money. In fact, they’re out the money it cost them to buy these solar panels — and yet it’s a great example of how this stuff works on people. Why? Because they were made to believe they were saving the planet, and they wanted to be helpful and their lives to be meaningful. So they went out and they bought these things, and they’re worthless.

I told you about the first house I bought when I lived in Sacramento. It was a project, a housing project, and every house in the development had two solar panels on the roof. And I said, “What are those?” “They’re solar panels. You won’t believe how much money you’re gonna save on your electric bill.” I didn’t save a dime. They were worthless. It was later discovered that they weren’t even connected to anything. They were just up there to satisfy some regulation that the homes be built with them.

CALLER: Hey, Rush. Thank you for taking my call. I love the show.

CALLER: I’m going back to something you said earlier in the show about the Brits having a problem with their solar systems. You know, I used to install solar systems, and one of the things that was happening is that the system was probably producing, but they were probably only get 50% credit on their bill. So I think that’s what the big problems are these days.

RUSH: How does that happen?

CALLER: Well, you know, I used to have a system in my house in California.

RUSH: You mean the energy company is screwing people? Is that what it means?

CALLER: Yeah, it is. What they’re doing is stealing your excess and giving you credit for about 50%, and that’s a fact. That’s what was happening.

RUSH: Stealing excess? Well, okay. I don’t… Let’s hypothetically say that it is. That would mean, then, that those people are in on the scam and that it is a scam, correct?

CALLER: Correct. However, this is what gave rise to the battery-backup systems.

CALLER: No, battery backup… Yeah, you could call ’em generators. You know, they’re the batteries that are, you know, running/charging off the solar systems.

RUSH: Oh, you’re talking about a… What’s the name? I’m having a mental block here. I know what you mean.

RUSH: I have ’em all over my house, the power strips that are battery backups. (interruption) UPS, yeah! UPSs. I’ve got ’em all over the place. Well, here’s the story I was bouncing off. It’s from the U.K. Daily Mail. “Fury Over Fading Benefits of Solar Power as Thousands Complain to Finance Watchdog — They were promoted as the eco-friendly way to generate both electricity and cash at the same time. But now thousands of homeowners who bought solar panels have complained that they’re not reaping the rewards they were promised.

“The Financial Ombudsman Service has received 2,000 complaints and Barclays has put aside millions to compensate those who took on [big time] loans to pay for [solar] panels. solar panels. Martyn James, from complaints website Resolver, said: ‘The mis-selling of solar panels has been going on for years. ‘No one fully knows the scale of the problems, but it is definitely one of the top ten scandals of our time.”

Now, what this story means is these solar panels on these people’s homes are useless. They’re not doing anything. They’re not saving them any money. They’re not generating enough electricity to overcome the absence of fossil fuel generated. So they feel like they’ve been totally ripped off, and you think that they are working. It’s just the power company are playing games with how much they’re delivering and charging full boat for it, nevertheless. Is that essentially it?

RUSH: Aside from greed, why would they do that?

CALLER: They have shareholders they have to please, you know? If they can’t make money, their shareholders are gonna be upset. So, you know, if you look at what happened in Hawaii, solar produced so much energy that Hawaiian power was losing money, and they couldn’t make their stockholders happy.

RUSH: I’ve never heard that. The only stories I’ve heard are how it doesn’t produce nearly enough, that it is not meeting inspections.

CALLER: You’re getting all the wrong information. Sorry to say that but, you know, systems that I installed in my day, you know, they produced 100% of the household need. And what was happening was that after a few years, they would get electric bills showing zero. And all the sudden about two, three years ago I started getting complaints from customers saying, “I got a bill from the company that I owe them a hundred bucks,” and I said, “Oh, let me check your system.” Well, I checked their system, everything’s operating. And then I would look at the bill, and then I’d check the system to see how much they produced. And I discovered that the electric company was only crediting them two-thirds of the amount they produced.

RUSH: Two-thirds of what — who produced?

RUSH: Okay. So put a solar system on and that’s gonna get you a credit with the solar company ’cause you’re not gonna need as much power from them, theoretically. And then the solar company comes along and they don’t give you the proper amount of credit for how much your panels are generating, and that’s — okay. Well, I’m well aware of the suspicion that people harbor with utilities, power companies, phones, Big Oil, fossil fuels, I’m well aware of all this.

My dad said, “What the hell is this? We weren’t even here. We weren’t using any, and this bill.” And the answer was, “It’s always an average, Mr. Limbaugh, over the month.” They had an answer for it. “But our meter, our meter was not working, there was no electricity being generated.” “It was being delivered, Mr. Limbaugh, it was being delivered.”

This is why, by the way, folks, when this program started, every subject was wide open and available except phone bills, electricity bills, you name it, because that’s all anybody ever had was complaints about them. And who wants to listen a steady diet of that? I’m aware of these various theories that people have.

I’m not aware of solar fulfill — I mean, even these places that have these massive solar panel fields, they buy up acres and acres of cropland, they turn into giant solar panel farms, still not enough to power the factory or the office building. They still need to supplant it with traditional forms of the delivery of electricity. I’ve not heard of so much solar being produced that power companies were going broke.