Our Short Tropical Depression Panic Is Over

RUSH: Have you noticed there’s another tropical depression headed our way? Have you noticed it? Have you noticed it was on the same path as tropical storm/Hurricane Dorian? Now, it popped up yesterday as what they call… I’m having a mental block on the… Invest… (interruption) No, Invest 95. Before it becomes a thing, when they’re investigating it, it’s Invest 95, which is the number of the system for this year, their coding system. It was a potential area of tropical disturbance that they were looking at very carefully.

They put an X on the map out there, then they apply the model runs to it, and, lo and behold, they came up with a track. And the track for this thing, guess what? It made a beeline for the Bahamas, made a beeline for… Well, Jupiter. There were tropical storm warnings for Jupiter inland up to the Volusia County farmland, whatever it was. We escaped the warning area. Do you know what the maximum winds were going to be at the time it drove by us? Thirty-five miles an hour. (laughing) Thirty-five miles an hour. You… (interruption) Oh, hell, yes. They don’t close the airport ’til it’s 60 knots. 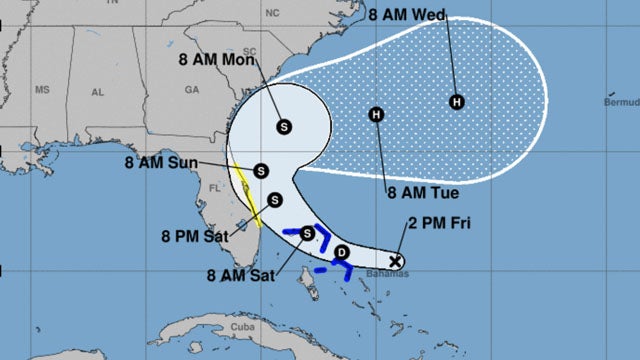 The airport raised… If they know a storm’s coming, you know, I have to know these things. You gotta get the airplane outta here if the storm’s gonna hit. So you wait as long as you can. So the rule of thumb is they’ll close the airport at 60-knot winds, which is about, what, 65 miles per hour? So a hurricane’s 74 miles per hour. A Category 1 is 74. Anything under that is a tropical storm, but this was not even that. It was a tropical depression. They’ve still got the track out there. They’ve still got the cone, the latest run.

It’s moved further away from the Florida coastline, and now makes a beeline right over Abaco Island in the Bahamas again. They say it will become a hurricane after it reaches the latitudes of New York. It will be out to sea. It will be out to ocean. It’s gonna make a big turn toward the east after hugging the U.S. coast again, and that it will become a hurricane long after it’s beyond hope of hitting any land. But I looked at when I first saw this. I started getting alerts. My weather apps alert me. (impression) “The National Weather Service is watching tropical depression number 9, and…” Okay. I go look at it. I looked at the cone, beeline right for us, a little north. Now, we’re out of the woods in just one day.

RUSH: By the way, I was asked a question here and I went and checked. The original wind field as forecast by the National Weather Service on this tropical depression out there does not reach Alabama. It does reach Georgia in case you are interested.