RUSH: Now, this is fascinating. We were just talking about this. I think it was this week, if not the week before. Remember how good economic news always seems to panic the markets? When there’s good economic news, the Fed says, “Uh-oh! Uh-oh! We gotta raise rates. We gotta slow down the economy.” Wall Street says the same thing. “Good economic news? Uh-oh!” They get concerned, because they say they’re worried about inflation, and, above all else, we gotta keep inflation controlled no matter anything else. 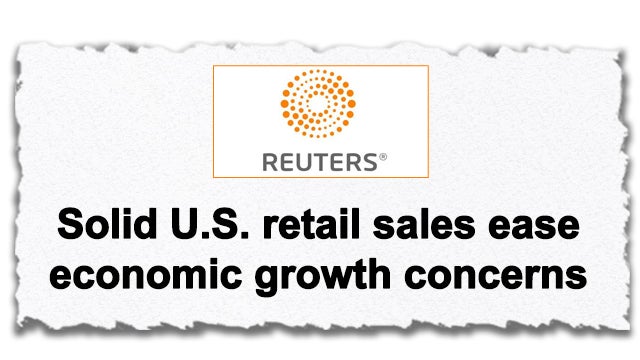 So, there’s great economic news today: “Better-than-expected retail sales for August.” They were up .4%. The estimate was .2%. So, the actual retail sales growth for the month of August was twice what the experts thought it was gonna be. Okay. So, that’s the raw news. I have now a headline and story from Reuters. You ready? “Solid U.S. Retail Sales Ease Concerns About Economic Growth —

“U.S. retail sales increased more than expected in August, pointing to solid consumer spending that should continue to support a moderate pace of economic growth. The report from the Commerce Department on Friday could further allay financial market concerns of a recession…” Could. These fears, “Concerns of a recession … have been fueled by a year-long trade war between the United States and China as well as slowing global growth.” So, here you go. You’ve got the great news, and now we get why we shouldn’t be happy about it.