I won’t be surprised if after they have a nominee, that whoever the nominee is they try to tone some of this down because this is not mass appeal stuff. Right now, the things these Democrats are exuberantly promising is aimed at getting the base behind the eventual winner. The Democrat Party is afraid of its base. The Republican Party may be, but Trump is not afraid of his. The Democrats really are. The Democrats in the media are scared to death of their base. 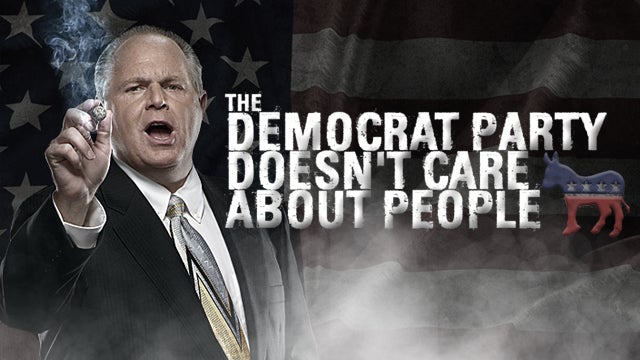 So all of these debates feature the most radical elements of their agenda, pronounced with pride and a lot of volume. They’re being very, very loud about it. At this point these Democrats are not even thinking about how to win the general election. Except I think there’s a psychological mistake they’re all making. I think they truly believe that most of the country is like them. I think they believe most of the country hates Donald Trump. And they’ve got some polling data out there to back them up.

You know, Trump’s approval numbers in some polls are in the thirties now. And there are a number of polls out there that show any of six of these Democrat nominees defeating Trump. The same polls that showed Hillary Clinton beating whoever the Republicans nominated. I mean, the polls are predictable. But the point is, they believe them. They are caught up in the idea that Trump’s a gigantic mistake and that everybody knows it and we just haven’t succeeded in correcting it yet.

The Democrat Party base has been promised every day for two years that Trump’s history, and it hasn’t happened, and they’re frustrated as all get out. And they got lingering fears that the Democrats are incompetent and unable to get rid of this guy even though it’s obvious he was a Russian agent. Even though it’s obvious he colluded with Putin. This is the way their base thinks, and that’s what they have to respond to.

So here, based on what we’ve all heard is the Democrat agenda, this is their platform. Whoever wins the nomination will be running on this platform. And in no particular order here. Don’t want to assign priorities. Just want to go through the list. Gut the Second Amendment. Gut it. Get rid of as many guns as possible. This is the platform.

Nobody disagreed. Nobody thought Beto was overstepping there. They all supported it. They all applauded it. The only guy they really took after was Biden ’cause he’s the frontrunner. The next thing that’s gonna happen, the Democrat platform is destroy free market capitalism and officially move this country to government socialism.

The next thing they’re gonna do, they’re gonna take away private health insurance. They’re gonna put the government in charge of health care. It doesn’t matter how much it costs. It doesn’t how much pain. If you’re on a private insurance plan that you like, if you’re on an insurance plan you get from your boss that you like, they’re taking it away from you. For the good of the country, for the good of everybody, for the good of people that don’t have health care, you who have yours and like it, it’s going to be taken away from you. Do not doubt me. This is what they will do or try to.

They are going to grant amnesty to however many millions of illegal immigrants are in the country. They will grant a blanket amnesty and then speed up the citizenship process so that they can register them to vote. They’re not gonna give two hoots about what the Republicans think or you think. They’re just gonna do this.

Those who came here illegally will be allowed to stay. They will not be punished. And, in fact, they’ll be fast tracked for citizenship. If you have come to the United States illegally, you will be found so that you can be given free health care, paid for by tax increases on the middle class.

They are going to double down on failed public schools and expand their influence. They are not going to engage in any work that would fix public schools because in reality they look at them and don’t see a problem. They’re in charge of them. They run public schools. They are accomplishing what they want. They’re not teaching people to think. They’re indoctrinating, propagandizing, distorting American history.

I look at these people, and I say, “You just… You’re hearing them, but you’re not listening, or you’re listening but you’re not hearing. Maybe the Democrats your age are going through the motions, but I’m telling you: These younger Democrats, the Millennials and so forth — the Gen Xers, the Alexandria Ocasio-Cortezes — they’re dead serious about getting rid of fossil fuels. They are dead serious about punishing executives in any and all fossil-fuel business. They are dead-set serious about this.” Now, all of this is just for starters.

They believe Obama got a good start in moving the mind-set of enough Americans in that direction. You see, Democrats believe the individual should be subservient to the state. Democrats believe that choice in economic decisions, choice in commercial transactions makes everybody worse off, because not everybody has the same amount of money. And not everybody can buy the same nice things. And not everybody can engage with similar choices. So it adds up to inherent unfairness brought on by bias, which is racial and economic.

We don’t have anybody on that stage who’s actually ever done anything, and yet every one of them professed to be an expert in health care, for example. There isn’t a one of them that’s ever even run a hospital or a free clinic or a drugstore. There’s not a one of these people! This is the classic arrogance of people who are of the academic mind-set. They’ve never done diddly-squat. They sit around and talk to each other in the lounge theorizing. They think they know more than everybody who’s ever actually done things.