RUSH: Now, normally I would not make a big deal out of this, either. But this, I’m gonna call your attention to. I’m gonna go back to May 22, 2018. So it’s, what, 15 months ago (a year and a half ago, let’s call it that), and I was describing for people… You know, I love analogies. I love to persuade. There are many different techniques that one can use to persuade. I love the analogy or comparison. I was trying to explain to a caller the way the Washington establishment has reacted to Trump, and this is what I said (audio sound bite number 1) to the caller. 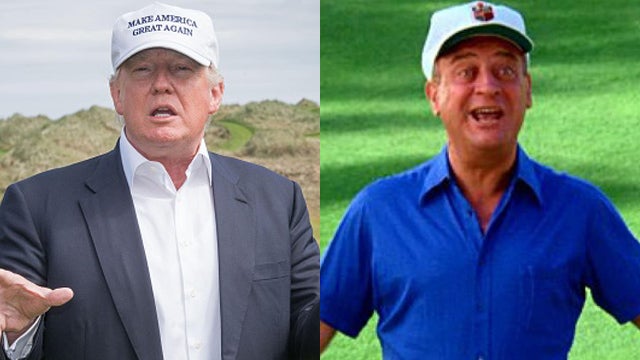 RUSH ARCHIVE: You know another way to look at Trump? How about the movie Caddyshack? Here you have these phony club members led by Ted Baxter, and he’s running around. They’ve got this little country club and everybody in it thinks they’re the best of the best in town. Rodney Dangerfield decides to join and gets in and blows the club up. He’s got this gigantic golf cart, drives it on the greens, blows a big horn, has a gigantic golf bag. The leaders of the country club are beside themselves. They try to kick the guy out, and they can’t. They lose every effort against him. That’s Trump: Rodney Dangerfield in Caddyshack.

RUSH: Yeah, Ted Baxter was great in that movie. He’s christening a new yacht for his family, and it’s like a 12-foot dinghy. And Rodney Dangerfield has this giant 80-footer and capsizes it while driving by waving. This is Trump, okay? So let’s now go to Thursday on a podcast called Recode Media. There’s a guy — the host is Peter Kafka — and he’s talking to the New York Times chief television critic, James Poniewozik, about his new book, Audience of One: Donald Trump, Television, and the Fracturing of America. The question: “There’s a great comparison you have in the book. For our younger audience who hasn’t seen Caddyshack, explain Rodney?”

PONIEWOZIK: Al Czervik, who Rodney Dangerfield plays, is this obnoxious, boorish rich guy who all the stuck-up people — the other stuck up rich people in the country club — hate. His character is opposed, in the movie, to Ted Knight’s character, Judge Smails, who is the, you know, stick-up-his-ass, uptight rich guy who sort of runs the country club and cannot stand him. This all came to mind during the 2016 debates to me, when I’m watching Donald Trump in action in the debates and seeing him go up against Jeb Bush. He’s like the Clampetts against Mr. Drysdale. He’s Rodney Dangerfield against Ted Knight. It’s the rich guy that you want to be against the (bleep) snotty rich guy that everybody hates.

RUSH: Now, what should I do with this? Here’s this guy has written a book. The New York Times TV critic has written a book trying to explain to New York Times readers the effect Trump has on Washington. He uses my analogy, my comparison from a year and a half ago. You see, my friends, this is yet another example — it’s yet another definition — of being on the cutting edge of societal evolution.