Teachable Moment on the Value of Trump’s Tweets

RUSH: This New York Times story that is building. I want to share with you, Howie Kurtz, who is the media critic, the media analyst at Fox News — now Howard Kurtz — he’s a good guy, don’t misunderstand, don’t anybody misunderstand. But Howard Kurtz is in the camp that gets the vapors over Trump’s tweets. You know people, I do. I run into them, “I just love Trump, but I wish he would stop the tweets.”

“Why? Why do you wish he would stop the tweeting?”

“Admit it, it makes you nervous. Do you think it’s hurting?”

“Well, I just wish –” And Howard Kurtz was in that group that Trump tweeting, “Oh, gee, it’s so unpresidential, it’s so beneath the dignity of the office.” Well, let me read an excerpt paragraph from Howard Kurtz, who is just ripping the New York Times for what they did here, the story about Kavanaugh.

Quote, “With two hours before airtime, two things changed my mind. One was the tweets by the president, which denounced the allegations as ‘lies,’ said Kavanaugh should start suing people and, in a strange aside, said the Justice Department should rescue him. (The Kavanaugh camp, by contrast, chose not to give the story any oxygen by commenting.)”

Now, the title of Howard’s piece or the headline is: “How I Realized the NY Times Kavanaugh Story Was a Train Wreck.” Trump’s tweets. If Trump hadn’t tweeted what he tweeted, it might have taken a little longer for Kurtz to find out what the Times really did. And this is the primary reason those of us who support Trump don’t mind him tweeting at all because there isn’t anybody else on his side that’s gonna get the truth of the story out because it’s not presidential or because it’s not proper, or what have you.

I have another example of this today. “Donald Trump Demands DNC Hold ‘Open Borders’ Convention in 2020 — President Donald Trump ridiculed the Democrat National Committee on Monday, mockingly asking them to reduce security for their 2020 political convention. ‘They just gave out a tremendous contract, you know what it’s for, they’re building a big wall around the building,’ Trump said. ‘A massive wall. We should tell them “open borders,” let anybody come in.’” 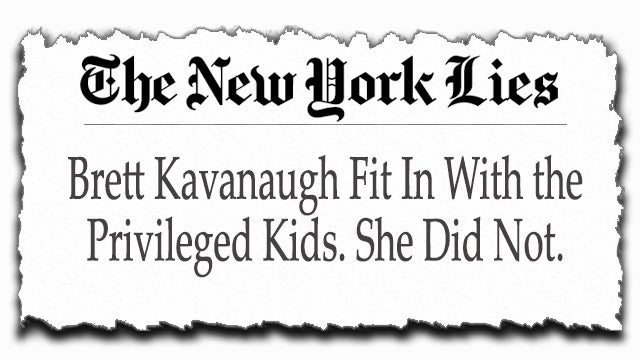 Isn’t that what the party stands for? They don’t want any wall in the southern border. Hell, half of them don’t even want a border. And any illegal that gets in the country, they want them to have free health care paid for by the American middle class.

Trump was talking about the Democrats’ upcoming convention in Milwaukee. It was during a political rally he had in New Mexico last night. Trump noted that he continued to face Democrat opposition to building a wall on the southern border despite Democrat support for borders in the past. They’ve all been in support of walls in the past from Obama on down. They’ve all voted for them.

And Trump says, “Now a few years later, they don’t want a wall, do you know why? Because anything I want, they want to do the opposite.” Trump said he’s gonna keep fighting for border security, gonna keep building a wall on the southern border to keep out drugs, crime, cartel violence, and NFL wide receivers.

He said, “We need four more years,” as the audience roared with applause. And that audience last night, folks, it was filled with Hispanics. I’ve got a tweet here of somebody describing it. Here it is. “Democrats are sweating bullets tonight. There were Latinos for Trump everywhere at the Trump rally in Rio Rancho, New Mexico, tonight.” When Trump asked if there were any Hispanics in the audience, the arena erupted in cheers. Latinos were shouting, “USA, USA” and, “Build the wall.”

Now, Howard Kurtz has not said he’s changed his mind on Trump’s tweets. That’s not what I’m saying. I know he’s from the group that thinks it’s unpresidential, Trump shouldn’t be doing it. And then this headline: “How I Realized the NY Times Kavanaugh Story Was a Train Wreck.” Trump’s tweet is part of the recipe for that.

And here’s another Trump tweet. “I call for the Resignation of everybody at The New York Times involved in the Kavanaugh SMEAR story, and while you’re at it, the Russian Witch Hunt Hoax, which is just as phony!” Which was my point yesterday. 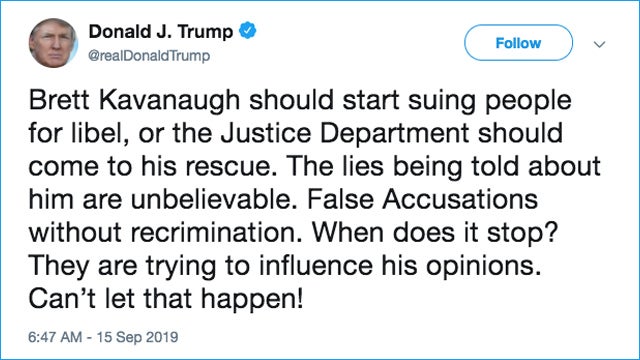 Folks, if you’re upset over what the Times did to Kavanaugh, well, expand that on 2-1/2 years every day against Donald Trump — on the front page, above and below the fold. The New York Times hasn’t been about journalism in I don’t know how long. Back to Trump’s tweet. He said, “They have taken the Old Gray Lady and broken her down, destroyed her virtue, and ruined her reputation. She can never recover and will never return to greatness under current management.

You know how bad it is in New York? I remember shortly after I got to New York… Well, maybe four years in. It couldn’t have been… No, it had to be before that because I was still taking Yellow Cabs to get around. Nope! I take it be back. I take it back. It was not a Yellow Cab, it was a car service, and the driver was, I think, from India or one of the Middle Eastern countries. He knew who I was, so he started talking about politics, and then he began talking about how he wanted to become a foreign policy expert.

RUSH: Back on Saturday, the opinion editors of the New York Times tweeted a link to the article about Kavanaugh and Deborah Ramirez with the comment… Oh, gosh. If you are offended by the actual names of male and female body parts, I’m gonna give you five seconds to tune out so that you won’t be bothered — and if you don’t tune out and you’re bothered, you can’t complain to us because you have been warned.

Okay, ready? Five… four… three… two… one. So on Saturday, the opinion editors at the New York Times tweeted a link to their article about Kavanaugh and Deborah Ramirez — who doesn’t remember anything happening — and they tweeted the comment, “Having a penis thrust in your face at a drunken dorm party may seem like harmless fun. But when Brett Kavanaugh did it to her, Deborah Ramirez says, it confirmed that she didn’t belong at Yale in the first place.” She doesn’t remember! Do you know what the Times is embarrassed about? 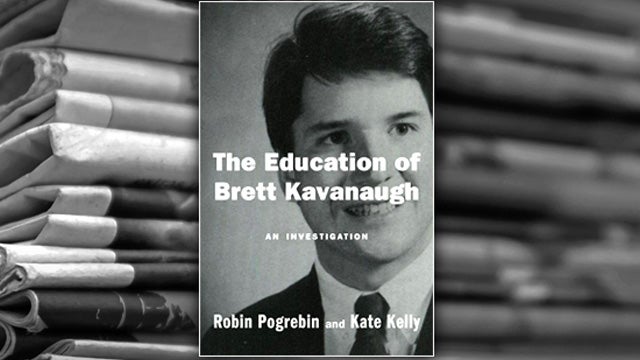 Not that they lied about Kavanaugh. No, no, no, no. The Times doesn’t have a problem with that at all. They are embarrassed that they referred to “having a penis thrust in your face at a … party” as “harmless fun,” ’cause in the #MeToo movement there’s nothing about that that’s harmless, and there’s nothing about that that’s fun. So the people of New York Times are feeling appropriately guilty over referring to something like that as “harmless fun.”

So it’s the New York Times opinion editors have screwed things up by leaving out that the victim didn’t remember the incident? The reporters knew. They didn’t put it in the story, but it was in their books, and now they’re trying to pass the buck to the editors for leaving out this crucial bit of information. Charles Grassley, who was the Judiciary Committee chairman during all of this, said that Kavanaugh’s classmate didn’t contact them.

Senator Grassley who “oversaw Brett Kavanaugh’s Supreme Court hearing, said on Monday that a former classmate accusing the justice of sexual misconduct didn’t contact the Senate Judiciary Committee last year. ‘That person, Mr. Stier, didn’t reach out or provide information to the committee majority. … My office never received anything from Mr. Stier or his unnamed friends.'” This is the guy who’s simply trying to get even with Kavanaugh. Kavanaugh worked on the Starr Report team while Max Stier was working for Clinton in this whole special counsel investigation — Lewinsky, Paula Jones, and all that.