If Everyone Knows the New York Times Lies, Why Should Anyone Read It?

RUSH: You know, I was watching Fox this morning, and they were talking about something. Have you heard the bit in the Kavanaugh book by these two babes at the New York Times? Have you heard that they say in the book that they called Kavanaugh and they offered to interview him? They wanted to interview him for the book. They say that Kavanaugh said that he would do it if they would not report that he had done it. In other words, he would talk to ’em on background. He would tell ’em what they want to know, only if they said they didn’t talk to him. Of course, they refused.

So I’m watching people discussing this today on Fox News. One of the people talking about it is a good reporter, a great reporter from the Wall Street Journal named James Freeman. He’s a Fox analyst. James Freeman is a journalist, he’s in the business, and he was talking about how brilliant a guy Kavanaugh is here for refusing to talk to these New York Times reporters. (paraphrased) “Kavanaugh was very smart because he knew he would be misquoted, that he would be lied about.” 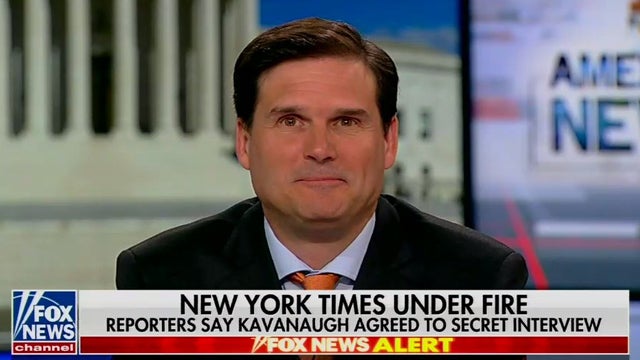 James Freeman is talking about the way the New York Times does business as though it’s common knowledge that — day in and day out — they lie, that they make things up, that they misquote people, that they’re running agendas. This is somebody in the business. This is not somebody outside the business making a comment about journalism. This is a guy who is in the upper echelon of reporters at the Wall Street Journal. I ask myself this question frequently. You know, I read a lot of stuff, folks, and I read a lot of people (leftists) who love the media and who think the New York Times is God on earth — and I am not exaggerating that.

They think the New York Times is infallible. They all want to work there. They all want to know the reporters that work there. I mean, it’s the most amazing thing. Yet here comes the Times, and they pull a stunt like this where they leave out exculpatory comments from the woman supposedly abused by Kavanaugh who doesn’t remember it happening. Then we find out that Christine Blasey Ford’s best friend did not even believe her story. Then we were told that Christine Blasey Ford had a real, real challenge to get to Washington because she doesn’t like to fly. She’s very nervous flying.

Well, we find out that the cofounder of LinkedIn put her on his private jet to get her to Washington! Reid… Reid whatever his name is. What’s the cofounder of LinkedIn’s name? Reid Huffingsmith? Reid Elkington? Reid whatever the name is. I know the name. It’s at the tip of my tongue. I’m having a little brain spasm here. Anyway, so all of these leftists are engineering the Christine Blasey Ford charade, while people say (sobbing), “She doesn’t like to fly. It was a really courageous thing she did to get there to try to save the court! (sniffle) My God, she’s so afraid of flying!

“She thinks the plane’s gonna go down!” And then (wailing), “She’s so still traumatized over Kavanaugh.” It’s like that, and now we find out that it was all part of a scam, that it was all part of a plan, that she was flown in a private jet. All of this stuff was… (interruption) Yeah, that’s right. Reid Hoffman. So all this stuff was given as prepub to give her credibility, when all of it is lies! So, anyway, this guy James Freeman from the Wall Street Journal is talking about this as though its commonly known, everyday behavior, strategy, business acumen at the New York Times or whatever.

And I’m stunned! And then I go by these little leftists who love New York Times and fantasize about working there and think it’s the bible, and then they pull a stunt like this. You ought to see the way these disciples New York Times for doing this. It is… The stretches they go to to exonerate them. “Well, I’m sure the editor made a mistake. I’m sure the editor feels very badly about this!” The editor doesn’t feel bad about anything other than they didn’t get away with it.

They were running an ongoing scam to get rid of Kavanaugh and it blew up in their face, and their business practices have been exposed to everybody. And now to listen to a New York/Washington journalist, James Freeman — and they’re all talking about the Times this way — as though it’s, “Well, everybody knows they make stuff up in this story. Everybody knows that they are misquoting people.” There’s nobody trying even to protect the image of journalism, is my point. They just acknowledge it. I’m a little floored by it.

RUSH: So I got an email. “Dear Mr. Limbaugh: What happened to protecting your sources in journalism?” This is bouncing off the story earlier today that it has been learned that these two women that wrote this bogus book on Kavanaugh… There’s no evidence backing this up. In fact, what we have learned is that nobody remembers any of these allegations that were made against Kavanaugh — and the allegations made by Christine Blasey Ford, her best friend didn’t even believe.

Well, if journalists know this, then why the hell do they tell us that what’s in the New York Times is so damn important? If you can’t believe it, if they use trickery and chicanery, if they lie to people and misquote them… We know they do from the 2-1/2 year, failed attempt to get rid of Trump! I don’t know how that newspaper or anybody else in the Drive-By Media honestly has any credibility. They openly, blatantly lied to people many times a day assuring their readers Trump was toast.

He was gone. He had colluded with Russia. He cheated. He didn’t deserve to win. Hillary should have won! He and the Russians stole the election. They made so many Americans believe this. Remember the polling data: 42% of the American people at one time thought the Russians had tampered with vote machines? So I don’t know. I honestly don’t know how they have any credibility anyway. If I had done that to you all, if I had misled you about something that matters to you, if I had blatantly lied to you every day for 2-1/2 years and then I end up being exposed, you’re gone — and I wouldn’t blame you.

There’s nothing I could do. There’s no excuse I could come up with that would save me. You would be gone and rightfully so. But not their audience. Their audience says, “Oh, okay. I guess this effort to get Trump failed. Well, we expect you to do another one,” and they did! Now they’re off on some other effort to get Trump. Now it’s Kavanaugh again. Proving that they don’t have anything of substance to run for the presidency on.

But the question about sourcing. You know, isn’t it sacrosanct? Isn’t it one of the founding, building block principles of journalism that you never reveal your sources? Right? You never, ever do this. So why are these two babes reporting that they spoke to Kavanaugh and that Kavanaugh agreed to talk to them only if they wouldn’t mention that they had talked to him? They burned a source! They’re violating every journalism rule known to exist — at least every rule they tell us they follow.

I think what’s becoming abundantly clear is there aren’t any rules in journalism anymore other than, “Get Republicans.” That’s it. That is the guiding principle in American journalism today: “Get Republicans while building up and advancing the leftist Democrat agenda.” That’s what journalism is — and, as such, it isn’t journalism. It’s political activism. So this is how journalists do it now. They go out there and say, “Talk to us for our book or we’ll tell everybody you offered to anonymously on background.”

So they go talk to somebody who says, “I’ll talk to you but only on background,” and the New York Times exposes them, burning a source. Whatever happened to protecting their sources? You know, sources ask for anonymity or not to be quoted on the record all the time. It’s the coin of the realm in journalism! Except there isn’t a realm anymore, much less a coin. I know I’ve beaten this to death, but I really don’t understand how they have any credibility.

If I were a dyed-in-the-wool leftist and I’d been hanging and hoping on every promise they were making to me that Trump was toast — and then every effort that they assured me was done, had blown up and Trump was still there — I would be so mad at these people. I’d be canceling subscriptions. I wouldn’t let them toy with my emotions like this anymore. But apparently the people on the left know that they’re not dealing in journalism here. They know that their paper is an activist extension of the Democrat Party.