Trump Triples Down on Himself

RUSH: You noticed, by the way, Drudge has a story here that — keep in mind the perspective. Rasmussen has Trump’s approval numbers up to 52. We’ve got the story on CNN last week Democrat Farm Labor Party people in Minnesota say they are switching to Trump. 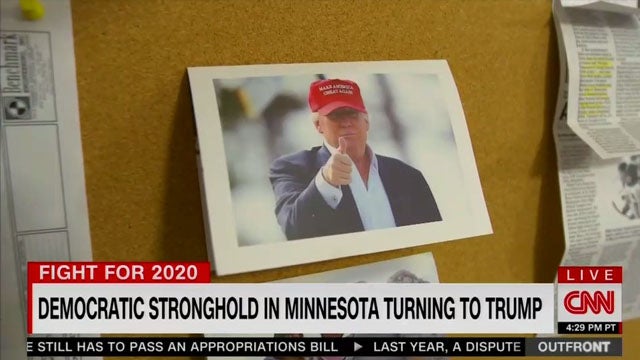 Folks, this would be like Soviet communists announcing allegiance to Reagan in the 1980s. The analogy is meant to express the divide, not that Minnesota is a bunch of communists, but that the divide between the Minnesota Democrat Party and what Trump is, is a huge gap. And for these Democrats to signal, and concomitant with it is that they express their dislike for Ilhan Omar… ho-ho-ho-ho. Make no mistake that’s a factor.

Trump’s tweets are up 43%. He is increasing the number of tweets. Every time people tell him to stop tweeting, he ramps it up. This is typical Trump. Double down, triple down. He listens to himself. He does not listen to a bunch of advisers. Oh, he may listen to them, but he is not somebody that’s indecisive. He is not somebody not sure of what he thinks. He most assuredly is. I can tell you that with direct firsthand personal knowledge.

He’s very polite, in fact, asking people, “What would you do? What do you think?” He’s got his mind made up. He is just being diplomatic, by the way, when he asks others what they would do. He’s bringing ’em in. He’s involving them, making them think he’s interested in what they think. And he may well be, but he’s got his mind made up. That’s not to say his closed-minded. It is to say he’s assured. He’s confident.

So his tweets have ratcheted up 43%, and you know what else? His rallies are 25% longer. And he did a rally recently in Texas with American Indians, not Native American Indians, but the subcontinent Indian Indians. Now, it’s not being talked about. The press is not reporting this. They may not even know it happened, I don’t know, but they are ignoring it because it’s huge! It’s like Trump went out to the great Southwest and did a rally and all of the Latinos showed up. I think it was New Mexico. Wherever it was when he then went and visited the wall. All kinds of Latinos showed up supporting Trump, demanding that the wall be built, shut down illegal immigration, Latinos.

That flies against conventional wisdom. Latinos supposedly hate Republicans and they supposedly hate Trump. And he went out and he met with these Modi Indians. And little by little, what the Trump campaign is doing is picking off a percentage of this constituency the Democrats think they own and then a little bit of this constituency that the Democrats think they own. And he’s doing all of this in plain sight of the Democrats and the Drive-By Media.