Why NFL Stadiums Are Full of Empty Seats

RUSH: Harrisburg, Pennsylvania. Dave, I’m glad you called, sir. Great to have you with us. Hello.

CALLER: Thanks for taking my call, Rush. I turned the Steelers game on yesterday at halftime. They’re playing at San Francisco. There was no one there. I mean, it looked like the stadium was maybe one-third full. What is going on there? Do you have any idea why there would be nobody —

RUSH: Yeah, I think the NFL is in trouble. Now, you people out there, you may be thinking, “Come on, Rush, stick to the issues.” Well, this is one. This is a cultural thing happening in America. The NFL’s current troubles began with a San Francisco 49er quarterback, by the way, Colin Kaepernick, who started protesting the flag and the country by taking a knee during the national anthem, and he claimed that it was because of police misconduct against African-Americans.

It then evolved and it was about much more than that. It’s actual dislike for the country. So Trump starts ripping the NFL and ripping the players, and that protest ends up being quelled. And last year the NFL’s attendance started to come back. And the drama — you know, the NFL is the greatest reality TV show on the air. You know why? Drama. Nobody knows the outcome. Scripted TV, you watch a cops and robbers show, 95% of the time the bad guy’s gonna get caught and go to jail. The entertainment value is watching the storyline unfold. The NFL is reality TV extraordinaire. No script, never know what’s gonna happen, and that’s why it was the greatest reality show on TV. And the networks pay through the nose for it.

The NFL has serious problems right now that have nothing to do with Kaepernick, although they started there. The compelling nature of the NFL is found in its competitiveness. On any given Sunday, on any given Sunday any NFL team can beat another. Well, not anymore. That mysticism is kind of gone. The Antonio Brown situation is just one microcosm of an ongoing on field-off field problem that the NFL has.

You know, in the off-season is when players would express their unhappiness and their discontent and demand to be traded or let go. Now they’re doing it during the season. It’s like the NBA. The concept of team and loyalty to a city, gone. Now, the 49ers entered yesterday’s game 2-0, shocking everybody. There were high hopes the 49ers would do — the Steelers were one of the greatest road draws in the NFL. Like the Cowboys, Patriots, the Steelers are in the top five. I don’t know what the actual crowd in San Francisco was yesterday, but I’m telling you the NFL has problems.

You’ve got five-star quarterbacks out for the year or retired. You’ve got third string quarterbacks that weren’t even on rosters in August now starting. Where is the compelling — You’ve gotta hope that one of them develops into a star and pretty quickly. And that’s why the NFL, the media is hyping Daniel Jones who sat in for Eli Manning, took over for him. That’s why there’s high hopes on all these backup quarterbacks. The backup quarterback for the Jets is somebody I can’t even remember. The Jets are a New York franchise. The Giants, New York. Both of them are already out of it. There’s no hope. There’s no prayer. There’s no reason to watch. 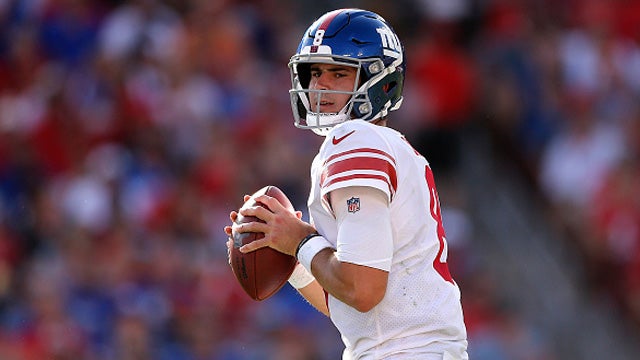 When the seats end up empty, and it’s becoming a trend, if you follow it on Twitter, people are taking pictures of all the empty seats at many, not all, but many NFL stadiums. If this keeps up, the people that really pay for the NFL besides you — well, you ultimately it doesn’t matter who the intermediaries are, but the TV networks, if they start demanding rebates for all the advertising they have — you know, the rights fees that they are paying, if they can’t charge enough selling advertising to make a profit on their rights fees or even break even, they’re gonna start asking the league for make-goods.

And, if TV audiences hold steady or plummet, and if an indication of that is happening by how few people are showing up at games, they’ve got some problems. And some of them they have control over and others they don’t. I think the NFL has just, in a couple of key ways, totally misunderstood the culture of its own fan base. And let’s see if they can figure that out pretty quickly.