RUSH: So what’s the endgame of this? I mean, where does this go? I go back and forth on it. Like you, I’m affected emotionally and sometimes intellectually by the literal onslaught and smothering nature of the one-sided politics called the news. There isn’t any news. What is said to be news is nothing more than the latest Democrat Party politics of the day dressed up as news. And it’s hard to avoid it, and it’s really hard to not be affected by it.

Or what if Biden is doing it to commit suicide? Because this operation, whoever is running this, this is a twofer. This is to get rid of Biden. This is to take him out, because whatever they’re saying about Trump, Biden did engage in this massive fraud over and over again for his son with the ChiComs and with Ukraine. It’s gonna come out.

In fact, folks, the Democrats have known about this for years. This is said to be the reason Biden didn’t go in 2015. The scuttlebutt inside the Beltway is the reason Biden didn’t run for the presidency in 2015, which would have been natural, he’s Obama’s veep, why not do it — because of this. Every Democrat knew. Biden knew they knew.

If Biden had sought the nomination in 2015, then all the Democrats coming, Hillary and so forth – of course, there was some deference to her too. But you’ve got Crazy Bernie out there running much better than anybody thought. Biden was scared to death this stuff was gonna come out in 2015. So why do it now? Biden has probably been assured by the media they’re gonna ignore it. I do not doubt for a moment there is that kind of collusion between the media and Democrats because the media is just Democrats in the media.

Biden is a Democrat in government. The media is Democrats in the media, and I have no doubt, just like the media would look the other way at John Kerry’s mistakes and faux pas and give him a second take when he blew the answer to a question in an interview. I’m sure Biden undertook this with the assurance that all of this stuff would never see the light of day.

Now it is seeing the light of day and the reason it’s seeing the light of day is because Biden, nobody ever thought this guy would be leading the Democrat primary polls. Nobody ever thought that would happen. Don’t doubt me on that. This is a shock to all of them. And it really is ticking off Elizabeth Warren and some of these others who now feel entitled to it. Biden’s an old man, he’s old news, he doesn’t know where he is half the time. His days has come and gone. It’s time for the torch to be passed to a new generation is how they’re looking at it.

So I wouldn’t be a bit surprised, Kamala Harris, Elizabeth Warren, I’m just throwing it out as a possibility. But don’t be surprised if by the time all this plays out Trump is up another two to three points in the Rasmussen survey. The fake Kavanaugh 2.0 thing, that bombed out. That has blown up in their face. If Trump hits 55 approval in Rasmussen, and if he hits 50% in the Real Clear Politics average of polls, they are toast, and they will know it.

Okay. Brief time-out. Time to next get to your phone calls, and that’s coming up right after this.

RUSH: We go to the Williamsburg, Virginia. This is Gail, and I’m glad to have you. Welcome.

CALLER: Thank you. I just wanted to make two points. One is that I do think they’re gonna keep Biden and Trump kind of engaged in these attacks and these charges about the Ukraine because I do think that Biden is gonna be the sacrificial lamb there. They’re gonna take him out and Trump, they’re trying to take him out at the same time so that Elizabeth Warren can kind of come up the side sort of unattacked. So I think that’s part of the plan —

RUSH: That’s exactly what I mean by twofer. And I think it goes farther than that. The Democrats live and breathe this stuff. You know, we Republicans do not strategize this way. We do not sit around and devise ways to destroy people. They do. Including people on their own team when it’s necessary. 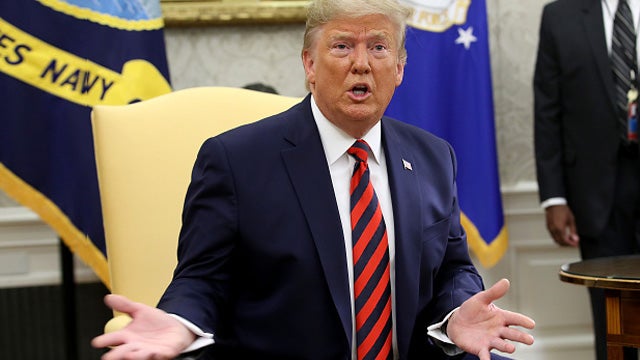 CALLER: Right. I don’t think he represents them.

RUSH: Right. So the challenge, then, is if Elizabeth is the chosen beneficiary, how does she escape being seen as part of this effort to get Plugs? I mean, the Democrats are doing it, the Democrats, this is a twofer for the — everybody knows the media and the Democrats are running this operation. If Biden ends up gone as collateral damage, although he won’t be collateral. He’s the prime suspect here. Well, the Democrats are all have some culpability here. Hang on, Gail. I know you want to say more so we’ll keep you on through the break here. Don’t hang up.

RUSH: Okay. Back to Gail in Williamsburg, Virginia. I didn’t mean to cut you short there with the expiration of the programming segment. My point is Biden’s gonna get taken out by this and maybe Trump is, too, but then it’s gonna lead to the question, “Well, wait a minute, I thought you guys were trying to get Trump. What do you mean, Biden?” It’s gonna fall to Elizabeth to be able to explain because every Democrat’s gonna be pushing every angle of this to get rid of Trump.

It’s gonna focus attention on what Biden did. That’s the real fraud. That’s the real crime that’s taken place. It’s gonna get exposed. And so the Democrats are gonna have some answers, they’re gonna have some questions, and Elizabeth Warren’s gonna have to say, “I’m sorry what happened to Joe. We were just trying to get the president. I’m really sorry.” It’s gonna be a challenge for them to somehow put some distance between themselves and the fact that this may take Plugs out.

CALLER: Right. Well, I agree with that. I’d like to make one point that’s off topic a little bit but it’s about the timing of this, that bogus press conference that they had yesterday about the impeachment inquiry.

CALLER: It just seems like, for example, Trump’s at the U.N., he just made that speech, I believe, and they set up this press conference at 5 and announced that they’re gonna do this formal inquiry, which they’re already doing. But I can’t tell you how damaging I thought that was. Trump is at the U.N. We have allies and enemies there.

And what they did was weaken the U.S. and the president in front of our allies and our enemy and empower our enemy. And a friend pointed this out to me, and I really thought about it, and I thought, that was such a dangerous thing to do to throw the United States under the bus like that because they hate Trump so much. They just empowered our enemies.

RUSH: Very shrewd. You’re very shrewd. That was, in fact, I think one of the reasons for the timing. Trump’s speech yesterday at the U.N. was maybe one of his best in terms of substance. Remember I told you I had people emailing, “Boy I wish Trump would wake up, Rush. He seems about to fall asleep. Gosh. I hope this stuff isn’t getting to him.” 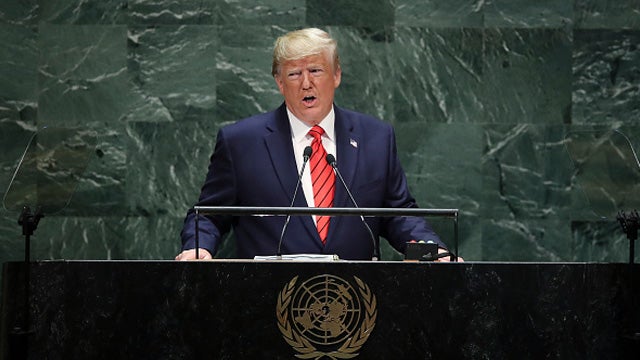 I had to send ’em notes saying, “No, no, you’re not looking at this right.” Trump is devastating. This is the biggest pro-America, pro-American sovereignty, pro-capitalism speech to the United Nations in years. And he’s calling out every one of these tyrants and thugs for what they are. He’s making sure that his personality doesn’t trample the content or step on it. It was delivered in a low-key way on purpose.

But the Democrats, you’re right, they come along and they announce this impeachment inquiry totally wiping coverage of that speech out. There wasn’t any. They did that on purpose. They did it to deny Trump the positive — you know, Trump’s supporters seeing that speech, Trump’s supporters seeing media reports of that speech that would have been honest, they would have been standing up and cheering. As such they were able to ignore it because it was overpowered by the impeachment press conference of Pelosi’s at 4 o’clock. And even if Pelosi hadn’t made any announcement, they would have found a way not to cover the speech.

RUSH: I’ve had some people ask, “Rush, what did Biden do? What is this all about?” There are seven essential facts. Peter Schweizer dug them up and wrote about ’em in a book a couple years ago. Nobody cared. But it’s widely known. The Democrats know all of this. In fact, all of Washington knows this.

Biden’s son Hunter joined the board of Ukrainian energy company Burisma in April 2014. He had no background in energy. Over a 16-month period, Burisma paid $3.1 million to a bank account associated with Hunter Biden. “Joe Biden led the Obama administration’s policy toward Ukraine when he served as vice president. Biden helped shape Ukraine’s energy and anti-corruption policies, issues that directly impact Burisma,” his son’s company.

“Burisma is led by an oligarch named Mykola Zlochevsky. Zlochevsky served as ecology minister under pro-Russia former Ukrainian leader Viktor Yanukovich, leading to allegations that he used his office to benefit Burisma.”

There are years and years and years of the Ukrainian government bending over backwards to send money to Biden’s kid, who knows nothing about the business of this company, Burisma. 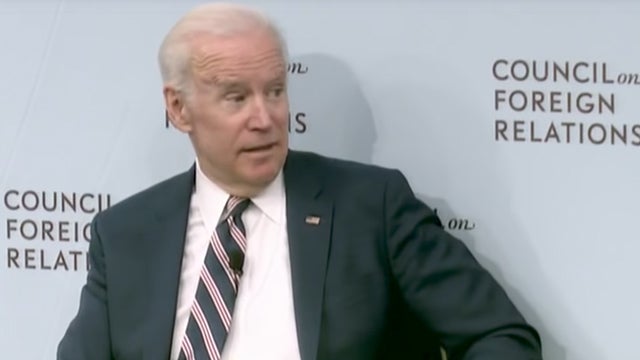 “Burisma was under legal scrutiny. Shortly before Hunter Biden was appointed to Burisma’s board, British authorities froze $23 million of Zlochevsky’s assets as part of a corruption investigation. Ukraine opened its own probe later that year.

“In 2013, then-Vice President Biden and his son Hunter flew aboard Air Force Two to China. Ten days later, Hunter Biden’s firm scored a $1.5 billion deal with a subsidiary of the Chinese government’s Bank of China.”

So Joe Biden sets his son up for life with deals with Ukraine and the ChiComs. Those are just seven essential facts. It’s exactly the circumstance I told you yesterday. This is how people inside the Beltway that don’t have any money arrange. They arrange government contracts to be paid, and they put themselves in the middle of the payment from the contractor to the government with a consultancy firm or a board of director membership or whatever.

And some of the money that the contractor’s paying to the government, either the U.S. or Ukraine, gets paid as a commission to the consultancy firm that’s set up to benefit the corrupt politician’s son, in this case, or family in other cases. And these deals are prominent throughout the Hunter Biden adult life with Vice President Joe Biden arranging all of these.