What We Know About the Partisan Whistleblower

RUSH: Now, I mentioned moments ago, ladies and gentlemen, we now have the transcript of the phone call between Trump and the Ukrainian president. As such, we know more than the whistleblower knew when he got all of this started. I think it’s important, it’s important to me to remind you again of the initial reaction of Phil Mudd when he heard about this, and to me, I’m not gonna forget this because it has to be legit.

Phil Mudd is a Never Trumper. Phil Mudd is a deep stater. He despises Trump as much as any Never Trumper does and for all the reasons. Commentator at CNN, former deputy director for operations I think at the CIA. When this story first broke, a whistleblower was so upset over something he had heard in a phone call between Trump and the Ukrainian president that he filed a whistleblower report with the intelligence community inspector general. 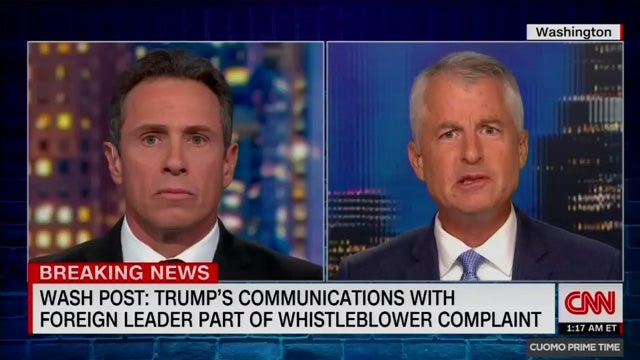 Phil Mudd blew a gasket. And all of his colleagues at CNN were kind of frustrated with him. He was going against the grain, said (paraphrasing), “Wait a minute. Presidents can say whatever they want to whoever they want. What do you mean, some intel guy is listening into the president’s conversations? That’s not what the intelligence community does.”

Mudd worried that this was gonna prove Trump’s original allegation that the wiretaps at Trump Tower were real. When Trump said that his wires at Trump Tower were tapped, remember how he was ridiculed, laughed at, the Washington establishment mocked him and made fun of him. “That’s not possible. This guy’s paranoid. This guy is not fit for office.”

So we have learned some things about the whistleblower, and none of this should surprise you. The anonymous person who filed the formal uncorroborated complaint against Trump for allegedly asking a foreign leader to investigate corruption related to Joe Biden now has a legal team. The whistleblower’s legal team includes a Democrat operative who worked for Senator Schumer and Senator Clinton. 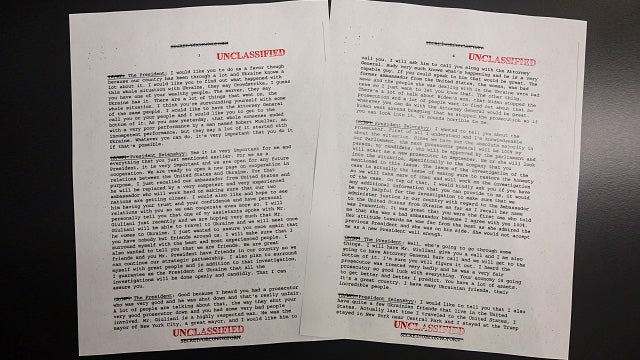 Andrew Bakaj, now a managing partner at the Compass Rose Legal Group, interned for Schumer in the spring of 2001 and for Clinton in the fall of 2001. More recently Bakaj has worked as an official in the CIA and Pentagon, specializes in whistleblower and security clearances in his legal practice. Andrew P. Bakaj, former CIA, Pentagon official, whose legal practice specializes in whistleblower and security clearances. His anonymous client, the whistleblower, has filed a complaint based on rumors accusing Trump of asking the Ukraine president to investigate Joe Biden. The intelligence inspector general decided the complaint was credible and urgent, but officials at the Department of National intelligence say otherwise.

Guess what? The Department of Justice has already weighed in and said that there was no value in terms of this being equivalent to, say, of an illegal campaign contribution. Trump asking for oppo research, for example, from the president of Ukraine. The DOJ has weighed in, says nothing of value here so it cannot be an illegal campaign contribution.

The irony here is of course — and I know you’ve already realized it — Hillary Clinton was working with Russia to dig up imaginary dirt on Donald Trump. The Steele dossier. Steele was working with agents of a foreign government to undermine Trump’s election victory! And this propelled a two-year witch hunt.

Trump has been speculating about the political of the witch hunt, the whistleblower. We know the whistleblower is from the Clinton-Obama universe. Think of the whistleblower as Sally Yates, you know, the holdover deputy attorney general when Trump was first inaugurated. When he tried to implement his first travel ban, Sally Yates, a holdover from the Obama administration, did her best to shut it down on the basis that Trump is not really president, he cheated, he doesn’t deserve to be so I’m not gonna see that his executive orders get implemented.

This is nothing more than another deep state player with ties to Hillary Clinton and various people in the Obama administration trying to undermine President Trump, pure and simple. And we’ve learned the whistleblower didn’t even hear the call, wasn’t in the room and wasn’t even privy to the details. So somebody leaked whatever to the whistleblower, the whistleblower supposedly was outraged and filed a report with the inspector general.

Washington Examiner story on this. “Ukraine Whistleblower’s Lawyers Work for Group that Offers to Pay Officials Who Leak,” against Trump. Can I read that headline again? The whistleblower’s lawyers work for a group that offers to pay people in the Trump administration to leak against him. Trump is still fighting the same opposition he fought in the campaign. He’s fighting the same opposition he fought after he won. 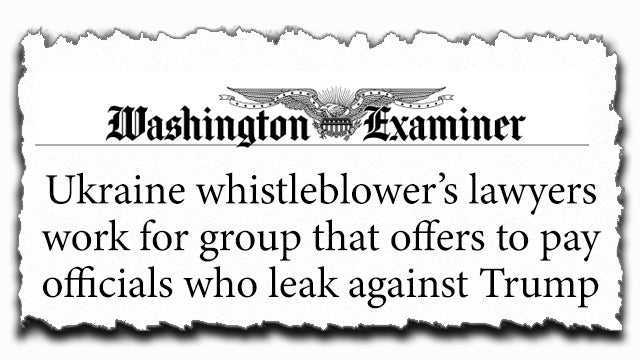 The same people who were involved in the coup, the silent coup, the witch hunt, the Mueller report, Trump-Russia collusion, they are out there offering money to people in the Trump administration to leak against him.

“The anonymous U.S. intelligence official accusing President Trump of improperly pressuring Ukraine to investigate Joe Biden is represented by two lawyers who run a group that offers financial help to fired whistleblowers.” That’s not the way to say it. These lawyers approach people and offer them money knowing full well they’re gonna get fired as whistleblowers. They’re offered money to compensate for the loss of their job. They’re being paid to leak. Whistleblower aid is what it’s called.

“It was launched in September 2017 — eight months after Trump’s inauguration — with an advertising blitz that involved mobile billboards being driven close to the White House, Congress, outside the Pentagon, and around the headquarters of the CIA and National Security Agency.”

They actually put up billboards seeking whistleblowers and offering to pay them! Inside the Beltway! The Washington establishment advertising billboards! Trying to encourage people to leak and whistle blow on Trump in exchange for being paid to do so. Any doubt the whistleblower is partisan?