No Day Off From the Betsy Ross Pushback

RUSH: By the way, before I forget this… I was gonna give this a day off and then I thought, “No, I’m gonna go ahead and remind you.” We made a big announcement yesterday. We’ve added another million dollars to our donation to Tunnel to Towers from the Stand Up for Betsy Ross campaign that we are running on the EIB Store at RushLimbaugh.com. It started on July 4th when Nike cancels their Betsy Ross flag icon’d tennis shoes because Colin Kaepernick doesn’t like the American flag. We said, “The American flag isn’t political. What the hell is this? 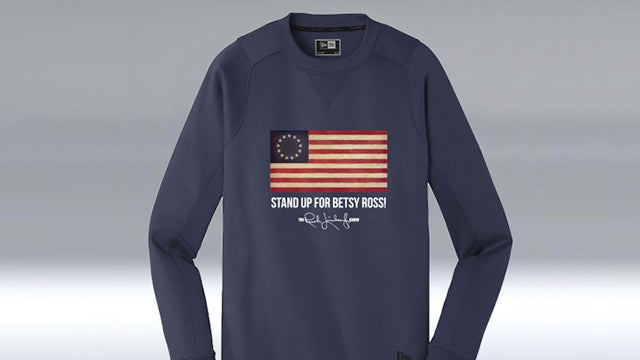 “Why cancel tennis shoes with the original American flag on it, for crying out loud? Betsy Ross is not political. The flag isn’t political.” So we decided to push back, and we created a T-shirt, Stand Up for Betsy Ross. And we decided to send the proceeds over to the Tunnel to Towers Foundation, which is a charity that pays off the mortgages and it builds high-tech homes for very severely wounded American military personnel. It was started by Frank Siller in honor of his brother, Stephen, who was a New York City firefighter killed going into the towers trying to rescue people — and it was a classic T-shirt.

And immediately, 200 fraudulent, fake, bogus knockoff websites sprouted overnight — and they continue to sprout. We’re now up to a total of over 300. We knock ’em down as quickly as we can. There’s only one place to get a legitimate Stand Up for Betsy Ross item and it’s at RushLimbaugh.com. Go to that website and go to the “Store” tab, either on the Rush Limbaugh app on your iPhone or on the website. Anyway, from July 8 up until today we have (these T-shirts are $27 items, folks) raised $4 million.

You have bought enough of these T-shirts in this pushback effort to create a $4 million donation to Tunnel to Towers — and counting. So yesterday we announced a couple of new items in the line. We started out with a white shirt, classic material, unlike any T-shirt you’ve ever worn. We then added royal blue as a color. Yesterday we added two new items: a sweatshirt fleece Stand Up for Betsy Ross long sleeve. It’s fall. The leaves are turning in places. It’s getting a little chillier. If not now, that’s on the way. So we’ve added a fleece sweatshirt — and it is gorgeous, and it is stylish, and it is quality.

It’s manufactured by New Era. We use a lot of their products, particularly their official caps. And we added a V-neck ladies’ T-shirt, long sleeve. Both are in royal blue for now. And the royal blue T-shirt is in cotton. So those two items have been added. And that’s what I wanted to tell you. You can see them at RushLimbaugh.com. Just simply click on the “Store” tab when you get there and know that the proceeds go to charity. This is not a profit pursuit for us. The proceeds go to Tunnel to Towers — $4 million since July 8.

The Drive-By Media has yet to do a single story on it. Not that we expected them to. In fact, we didn’t expect them to, and we don’t expect them to because they can’t have that kind of favorable story out there about me or this program or about you. That would go counter to everything they’re trying to say about me and about you and about conservatism. So I just wanted to make sure to remind you, we are up and running, and… (chuckles) I have to also admit that I remain so pleasantly surprised at the volume that we’re doing.

As I said to people, “We would have been blown away if this entire campaign had generated 50,000 to 75,000 T-shirts.” We are now well over, well north of 300,000 and counting — and, heck, that’s an old number. It’s probably more than that now. But, again, the only legitimate Stand Up for Betsy Ross product and apparel is at RushLimbaugh.com. Again, click on the “Store” tab. If you get your shirt or if you buy one anywhere else, you are being ripped off. You’re not buying the legit, you’re not getting the authentic, and certainly none of your purchase price is going to Tunnel to Towers.

RUSH: Hey, something I forgot to mention mere moments ago about the Betsy Ross items at RushLimbaugh.com store, we are going to be adding additional Betsy Ross designs in the near future. It’s gonna be an expanding line of apparel. So, keep checking back. And every time we add something new, of course, I will make a big hullabaloo about it here on my real radio announcer program.

One other thing about the bootleggers and the frauds. They are multiplying. It’s tough because there are people who see a Betsy Ross shirt or now a Stand Up for Betsy Ross fleece, a sweatshirt, long sleeve V-neck women’s T-shirts, and they say, “Hey, I’d like one of those, where’d you get it?

“I got it at RushLimbaugh.com.”

“Oh, okay!” And then they forget. So, they go to Google, and they put in “Rush Limbaugh, Betsy Ross” or some search term. And because Google is Google, they return a bunch of fraudulent, phony, fake Rush Limbaugh Betsy Ross T-shirt sites, and that’s how it happens. People think they’re getting a legitimate one, the authentic, when they’re not.

You can’t tell everybody. I mean, I can tell everybody who can hear me here that the only place to get the authentic Stand Up for Betsy Ross apparel is at RushLimbaugh.com. Nowhere else is it authentic, and nowhere else that you buy will any money go to Tunnel to Towers. They’re just a bunch of frauds out there.

But now we have learned that some of these bootleggers on the receipts they send people are actually including a fraudulent line that they’re sending money to Tunnel to Towers to further fool people into thinking that they have purchased an authentic shirt. So, all we can do is warn as many people as possible. There isn’t anywhere else to get an authentic Stand Up for Betsy Ross item of apparel. Only at RushLimbaugh.com, on our website or via our app, just however you get there to the website, tap on or click on the “Store” tab, and that will take you right there.