RUSH: Oh! By the way, if I’ve had one, I have had five emails, “Hey, Rush, hey, Rush, I see people talking about CrowdStrike all over the media now. Congratulations. Thank you.” I was happy to see that myself because Trump mentioning CrowdStrike in that phone call with the Ukrainian president, let me tell you something. You don’t know this. You’re not gonna see this represented, you’re not gonna see the media, the Democrats, react to it. They’re gonna ignore it.

But Trump mentioning CrowdStrike, that’s the firm that examined the DNC server after it was hacked in 2015, everybody thinking that the Russians did it. The FBI never examined it. We don’t know who hacked the server. We don’t know that there was a hack. We don’t know that it wasn’t an inside job to release some of the data on that Democrat National Committee server, whoever tried to hack the RNC computers. But they never got into theirs, but the DNC was hacked. 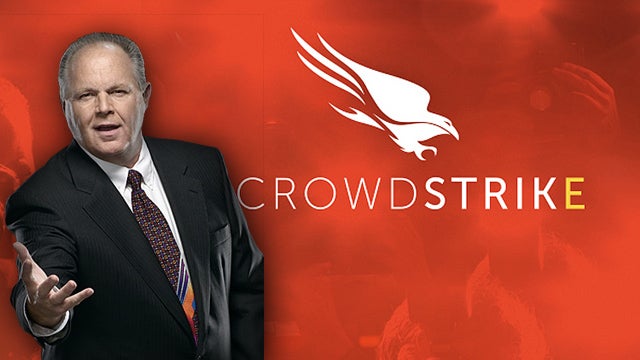 Debbie “Blabbermouth” Schultz would not let the FBI examine. They brought in this private sector firm, CrowdStrike, which is not Fusion GPS, but they may as well be. It’s all part of the same mix of Democrat political partisan operatives on the left here. And they said, “Well, yeah, we looked at it and the Russians hacked this.” And the only evidence for the Russians hacking it is that whoever the hacker was left evidence by way of a Cyrillic keyboard. The Russian language. Somebody was making it look like the Russians hacked it.

Anyway, when Trump mentioned CrowdStrike to the Ukrainian president — do not doubt me — what he was really asking, because he specified the business of Biden and his son, he’s really asking the president of Ukraine to help Barr in the investigation of when the Trump-Russia collusion investigation actually began. That’s what Trump wants to know. That’s what Barr is trying to find out.

That investigation is ongoing, and we don’t know much about it. But it’s still happening. And the fact that CrowdStrike got mentioned — the Democrats don’t want anybody to know about CrowdStrike. They don’t want anybody thinking about CrowdStrike. Because, I’ll tell you, it looks more and more and more like elements in Ukraine have some responsibility or culpability in the original investigation, the FBI and so forth, into Trump-Russia collusion.

I mentioned yesterday Donald Trump resents greatly the idea that he needed help to win. What really bugs him about the Russia collusion thing, aside from how outrageously criminal it would be, the way it’s been cast, is that it’s the greatest achievement of his life and they’re trying to take it away from him. And he did it against insurmountable odds. He did it against the entire Washington establishment. He did it with relatively no money compared to how much money they all had.

He outsmarted them; he outworked them; he out-innovated them. He just blew up every so-called political consultant, expert, and rendered them irrelevant, and they hate him for it. Donald Trump came in and showed you can beat the establishment and you don’t even have to use them to do it.

The very idea that he had help doing this offends the heck out of him. It’s the single greatest achievement of his life. He worked harder than anybody. He innovated and adapted and pivoted every day depending on what came at him with greater alacrity and skill than political professionals have been doing this their entire lives.