RUSH: We have a young 12-year-old girl on the phone from Alpharetta, Georgia. Her name is Avery, and it’s a pleasure to have you here, Avery. Hi.

CALLER: Hello, Mr. Limbaugh. Thank you so much for answering. First off, I would just like to say that my family and I are humongous fans of your show and have been listening for many, many years.

RUSH: Well, thank you very much. (chuckling) You made my weekend, you made my day here, Avery.

CALLER: (chuckling) I would like to discuss how my geography teacher is brainwashing me and my classmates and making many feel uncomfortable by spreading her liberal political views.

RUSH: The geography teacher is corrupting you with political news?

CALLER: Well, for example, she showed a CNN clip about climate change when we were learning about oil conflict in the Middle East and she showed Greta Thunberg’s speech to the national assembly speech in Paris.

RUSH: Oh, Greta… (sigh) What did you think when you saw that?

CALLER: Well, I was kind of confused because I wasn’t really sure how it related to what we were studying, but I was kind of angry. I was —

RUSH: But it’s not. You were being either propagandized or indoctrinated which is what a lot of teachers do.

RUSH: Did Thunberg…? Just as another young woman, did she impress you, or were you suspicious? How did you react to what she was saying?

CALLER: Well, I think that… I mean, I think that many people today are thinking this, and I do not think that the people are causing climate change. I don’t think it has to do anything with human beings. I think it’s just how the world is, you know, with the ice age destroying dinosaurs (chuckles) and stuff like that.

CALLER: It’s just how the world is. 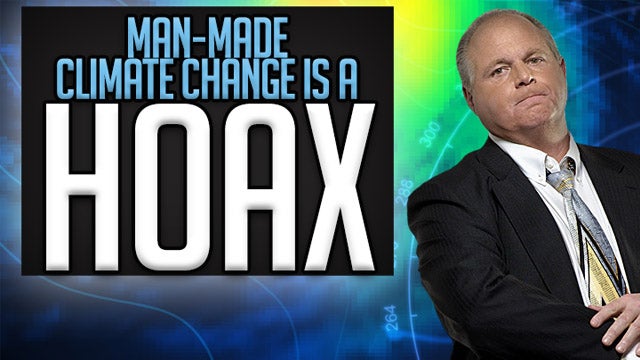 RUSH: That’s exactly it. That is exactly right. Well, Avery, look, can you hang on? We’d like to send you a little appreciation package of goodies here, but I’ve gotta go. Mr. Snerdley… If your parents don’t mind, get their permission, but we’ll get your address and send you some things. Do you have an iPad?

CALLER: I do have an iPad.

RUSH: You do have an iPad. Okay. Would you like a better iPad?