RUSH: You know something, folks? That really is another of the many reasons why they are so gobsmacked. What they were doing ultimately led to the attempt to rig that election. The insurance policy that Strzok Smirk and Lisa Page talked about. They were doing everything they could to make sure Trump did not win and then, if he did win, to be able to launch this plan to get rid of him. They were trying to rig an election, and they had rigged Hillary’s primary.

Sean Davis has written about it here at The Federalist. He is the cofounder. His headline: “The Trump Ukraine Whistleblower Complaint Looks Just Like ‘Steele Dossier 2.0.'” The reason I’m dwelling on this is to fortify you in the confidence that none of this is real. It is all as made up as Trump-Russia collusion is. They do not have an impeachable offense, like John Kasich told them. They do not have an impeachable offense, and people across the country are not talking about it.

They have laid an egg with this, and it’s important for you to understand that this is nothing more than a gigantic political strategy. It is a silent coup! We’re in the midst, folks, of a Cold Civil War: Us against the Washington establishment and its allies. “The anonymous whistleblower’s allegations of corruption involving President Trump and his Ukrainian counterpart, Volodymyr Zelensky, appear to be a note-for-note reproduction of the discredited ‘dossier’ of 2016.

“The template for a coordinated media and intelligence community hit against the president was first perfected in the dossier. British ex-sp[y] Christopher Steele compiled the bogus allegations at the behest of” Hillary Clinton. Do not forget the Steele dossier was bought and paid for by Hillary Clinton. She commissioned it as though it were a work of art, and it was designed to be political opposition research to nail Trump with. It’s not true. There’s not a shred of truth in it. There’s not a word of truth in the Steele dossier.

“Steele compiled the bogus allegations at the behest of the Democrats. Yet [that dossier] formed the basis” of the entire investigation: The Mueller investigation, FISA warrants to spy on Trump, the planting of human informants, the attempted planting of human informants in the Trump campaign, and the special counsel investigation. A fake, phony, not-a-word-of-it-true dossier was the foundation for everything. That is all they ever had. There was no evidence. 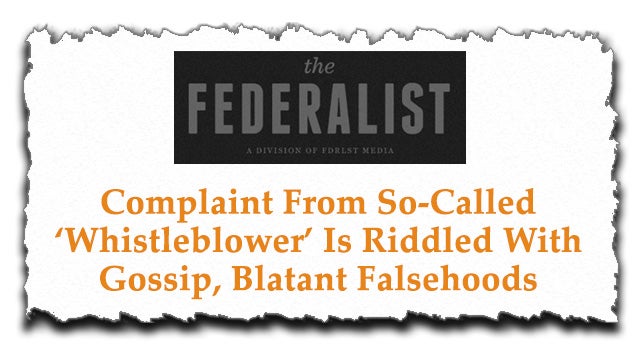 The whistleblower and his document are the Steele dossier version 2.0. “Liberals presented Steele as an operative with impeccable credentials and a deep network of Russian sources. His reports, we were told, set a gold standard for intelligence, so much so that the FBI regularly relied on [Steele]. His claims found immediate purchase in the highest circles of [media] until they were utterly debunked along with the whole ‘collusion’ theory.”

Except they still use the dossier, and they still use what it produced. So now, “[t]he New York Times, whose reporters were deeply involved in propagating the Russian-collusion hoax, reported on Thursday that the new anti-Trump whistleblower is similarly a career CIA operative ‘steeped in the details of American foreign policy’ and ‘demonstrating a sophisticated understanding of Ukrainian politics.’ The insinuation is that, given this resume, he must be beyond reproach or partisan animus.”

Just as Steele was impeccable, so is the whistleblower.

“In his dossier, Steele levied shocking accusations of corruption and impropriety by Trump and his team, going so far as to claim that Trump was bought and paid for by … Vladimir Putin… Steele hadn’t gathered or witnessed any of this evidence first-hand. Rather, he relied on anonymous sources, many of them third-hand. ‘Source B asserted that the Trump operation was both supported and directed by … Vladimir Putin,’ Steele wrote.

“‘Source A confided that the Kremlin had been feeding Trump and his team valuable intelligence on his opponents,’ including Hillary Clinton, Steele claimed.” It was all lies. The sources were not named. None of them had ever been verified. To this day, it has not been corroborated. “Referring to the infamous and nonexistent pee tape, Steele said, ‘The Moscow Ritz Carlton episode involving Trump … was confirmed by Source E. Source F, a female staffer at the hotel when Trump had stayed there… also confirmed the story.’

“Again, sound familiar? Compare that to the text of the author of the [whistleblower]. ‘I was not a direct witness to most of the events described,’ the whistleblower wrote. Just like Steele’s dossier, the complaint is riddled with third-hand rumors, gossip and hearsay gathered from similarly anonymous officials. ‘I was told that a State Department official’ did this or that. ‘I heard from multiple U.S. officials’ that such and such. ‘Officials have informed me. …’ And so on.

“Much like Steele, the Ukraine informant lacked first-hand access to evidence he claimed proved Trump’s guilt. … Likewise, the Ukraine whistleblower repeatedly cited articles from the New York Times, Politico and even a report from … George Stephanopoulos,” a Clinton hack! Just like the Mueller report cited news articles as evidence of proof, the whistleblower cites news articles as evidence of proof of what Trump did! It’s the same play! It is the same formula! It’s the same layout. Anonymous! Other than Steele is known, the whistleblower isn’t. It’s just version… I think we’re actually up to version 3.0 of this.

It’s all made up.

There isn’t anything about this — I mean anything — that is real.