Trump Calls for Pencil Neck to Resign Over Lies at Hearing

RUSH: I’ve gotta get back to the audio sound bites here because Trump, in these remarks that I’m convinced he wanted leaked, that he made yesterday, I’ve got some of the audio of it now. We already told you about it. He goes after the leaker, the whistleblower. He went after Pencil Neck, he went after Adam Schiff mercilessly. He went after the Drive-By Media as enemies of the people. 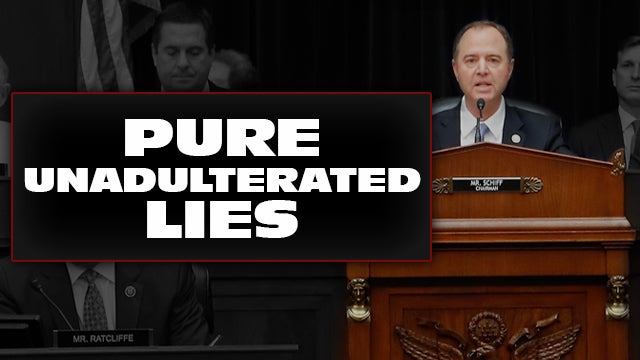 I want to circle back to Schiff, because this yesterday, when I played the sound bite of what Schiff did yesterday during his opening statement of the hearings with the Director of National Intelligence, if a Republican chairman had done anything like that, we would still be hearing about it and the Democrats would be demanding that that chairman resign in disgrace. What Adam Schiff did was attempt to mischaracterize Trump’s conversation with the president of Ukraine.

This is what Schiff wishes happened! It’s what Schiff thinks Trump does say to people! Whatever, it’s perverted! And it’s sick! And Schiff is sick! He’s classic example of people who’ve been poisoned by the sheer hatred they’re running around harboring toward Trump.

You don’t do parody as a chairman of a congressional committee looking into impeachable offenses. So the story was brought back, and Devin Nunes was on Maria Bartiromo today on the Fox Business Network, and she said to Devin Nunes, “Was that just all made up?”

NUNES: Yeah, and that went on and on. That went on for about a minute, minute and a half.

BARTIROMO: But it’s not what was in the transcript, though, is what I’m saying.

This is a serious issue. They want to impeach the president of the United States. They’re accusing him of crimes and then you fabricate nonsense, okay, that’s what they did yesterday, that was all nonsense, none of that happened. And then you come back and say, once you get busted on it, you say, “Oh, it was just parody. Let’s laugh about it.” Nobody is laughing.

But, you know, folks, it is in and of itself, it’s a self-contained microcosm of this whole thing. They are all lying. They’re all embellishing, like acting as though the Mueller report contains 10 different pieces of evidence of collusion? There isn’t one! So we went back and we decided to put this parody that the chairman executed, we decided to boil it down into one sound bite so that you can listen to it again.

SCHIFF: This is the essence of what the president communicates. “We’ve been very good to your country, very good. No other country has done as much as we have. But you know what? I don’t see much reciprocity here. I hear what you want. I have a favor I want from you, though, and I’m gonna say this only seven times so you better listen good. I want you to make up dirt on my political opponent, understand, lots of it, on this and on that. I’m gonna put you in touch with many people, and not just any people, I’m gonna put you in touch with the attorney general of United States, my attorney general, Bill Barr. He’s got the whole weight of the American law enforcement behind him. And I’m gonna put you in touch with Rudy. You’re gonna love him, trust me. You know what I’m asking, and so I’m only gonna say this a few more times, in a few more ways. And, by the way, don’t call me again. I’ll call you when you’ve done what I’ve asked.”

RUSH: Does that sound like parody to you? None of that happened! Trump didn’t ask anybody to dig up dirt. “Make up dirt. I’m only gonna say this seven times!” Trump didn’t say anything seven or eight times. (impression) “You better listen good. I want you to make up dirt on my political opponent, understand? Lots of it, on this and on that — and I’m gonna put you in touch with people.” None of that happened. Oh, he said he was gonna put him in touch with Rudy and Bill Barr, but that’s about CrowdStrike!

It’s about the 2016 investigation into Trump. I was watching it when it happened, and I was dumbfounded that nobody stopped him. I was dumbfounded. There wasn’t a single Republican that pounded his fist on the table in front of him and stopped the proceedings and demanded an explanation for what Schiff had just said. It was said and it was allowed to go uncontested for a half hour or longer before anybody said anything about it.

So I’m emailing and chatting with people before the program yesterday asking about this, and I can’t get anybody to think it was that big a deal! And to me, it was the only big deal of the whole hearings yesterday. When you’ve got the chairman making up this stuff, why did that not stop people in their tracks? Why did it not arrest people and demand that they focus attention on Schiff and call him out for it? Well, eventually he was by Mike Turner, who is a Republican from Ohio…

TURNER: While the chairman was speaking, I actually had someone text me, “Is he just making this up?” And — and, yes. Yes, he — he was. Because sometimes fiction is better than the actual words or the text. But luckily the American public are smart, and they have the transcript. 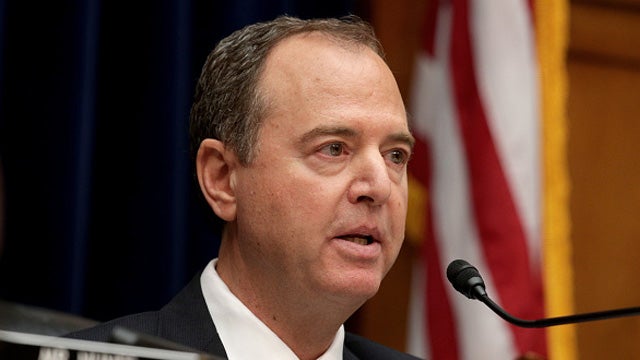 SCHIFF: As an aside, I want to mention that, uh, my colleague was right on both counts. Um, it’s not okay. Uh, but also my summary of the president’s call was meant to be — at least part — in parody. The fact that that’s not clear is a separate problem, uh, in and of itself. Uh, of course, the president never said, “Um, if I, uh… If you don’t understand me, I’m gonna say it seven more times.” My point is, that’s the message that the Ukraine president was receiving in not so many words. Um —

RUSH: No, it wasn’t! The president did not tell him to make up dirt on anybody. The president didn’t tell him not to call him back until he had a lot of dirt that was made up on anybody. He didn’t tell anybody anything like that! If I were Trump, I’d be going crazy with this stuff. You know as well as I do… How do you deal with people lying about you all the time? It’s the age-old question. What’s the response? And if you respond too much and too stridently, then the reaction is, “Ah, it must really bother you! There must be some truth to it.” It’s why other people have to come to the defense when this stuff happens.