RUSH: You know there’s some interesting polling data here, folks, and this may surprise you. At this exact point in Obama’s first term, he had a 42.7% approval rating. Let’s see. That would be September 29. That was yesterday. 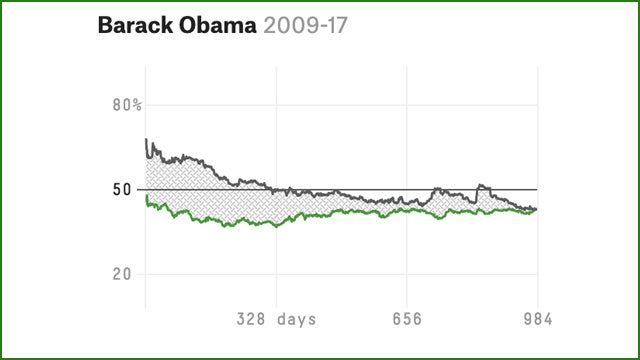 Barack Hussein O was at 42.7%. Trump today is at 42.8%. Donald Trump has a tenth of a point higher approval rating than Obama had this very same juncture in their first terms. “That doesn’t mean anything, Rush.” Can somebody cite for me all of the hit pieces on Obama for three years? You want to dig deep into your vast reservoir of your memories and tell me all of the negative press Obama got for three years? You can’t! He didn’t get any, not in the Drive-By Media!

Now can you cite any positive Trump news in the Drive-By Media, the Democrats in the media for the past three years? You can’t. So how do you explain this? How do you explain Trump a tenth of a point higher at 42.8%? What is this poll, by the way? The poll is Nate Silver, by the way, the guru and the god of left-wing polls and polling people and polling units and polling polls. If you ask me, Trump being a tenth of a point higher, or even tied with Obama, is flat-out amazing, given the nature of the news coverage for both.