Greetings, my friends, and great to have you with us. Rush Limbaugh, America’s Real Anchorman here at the Excellence in Broadcasting Network. And the telephone number is 800-282-2882. The email address, ElRushbo@eibnet.us.

So, the New York Times — and, by the way, stand by for audio sound bite number 12.

Meanwhile, Trump publicly acknowledged that he told Barr he wants to get to the bottom of this. By the way, not just for what happened to him, but for what might happen to presidents down the road or down the line. But the bottom line is that the New York Times is out making its readers think that Trump is behaving like a sneaky snake again trying to co-opt the attorney general of the United States into being his own personal lawyer.

So when this story dropped yesterday, Bret Baier on Fox News had to call the New York Times out because it was during an interview with Bret Baier that Trump made it known that he had asked Barr, and therefore it’s in public, to look into Ukraine, and had asked the Australians. He’d asked everybody to help him to help Barr find out what happened.

Here’s the sound bite. This is last night from Bret Baier’s Special Report, and he’s talking about the bombshell New York Times story that Trump asked the Australia prime minister to cooperate with Barr into the origins of the Russia investigation. This interview is from May the 24th. Here we go, three, two, one. 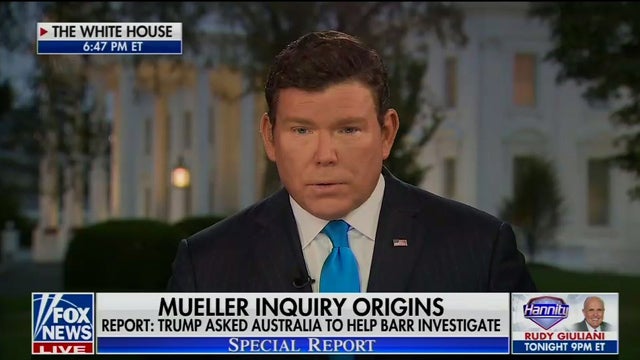 BAIER: Late this afternoon, the New York Times moved a piece that said: “Trump Pressed Australian Leader to Help Barr,” the Attorney General, “Investigate Mueller Inquiry’s Origins.” It got a lot of pickup and social media press and press all over. One thing to note, though, he said something like this publicly right here at the White House not too long ago.

RUSH: This was not with an interview of Bret Baier. I misunderstood. It was just Bret Baier being a good journalist there remembering what Trump had said. Again, back on May 24th telling everybody in the media — it’s one of those famous press gaggles on the way to Marine One, the helicopter. Here’s the New York Times story. “Trump Pressed Australian Leader to Help Barr Investigate Mueller Inquiry’s Origins.” 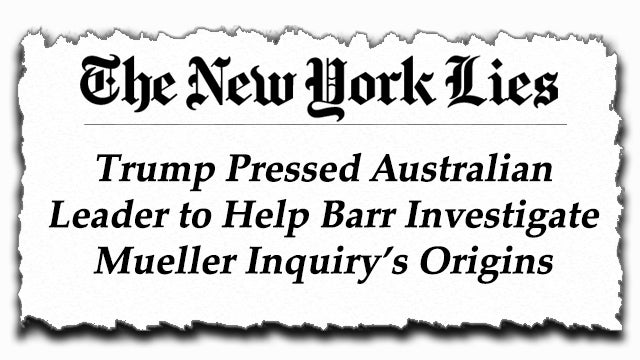 If you go search the internet, you can easily find Trump telling everybody that he has asked Barr to look at the U.K., Australia, and Ukraine for what was and what is the Russian hoax! So it’s a classic example, it was an attempt at a bombshell. The New York Times was trying to create a news bombshell yesterday claiming without any evidence based on two made-up sources that Trump had pressured the Australian prime minister during a phone call to help Barr gather information for the Justice Department investigation of the investigators.

But Trump had told everybody in the world back in May, and probably a couple of times since then, what he has asked Barr to do. Trump is so wide open with what he does and what he thinks that official Washington still can’t acclimate itself to him. And so what in the natural order of things in Washington would constitute a bombshell, Trump’s already done it.

But the point here is, folks, very simply, that this is another example right out in the open of the Democrats in the media trying to manufacture some gigantic bombshell to portray Trump as breaking the law so this can be folded into the impeachment inquiry. And there was nothing true about the New York Times story at all other than Trump had done it, but he had done it publicly months before the New York Times claiming that they just discovered it.