The Real Targets Are You and Me

RUSH: Ladies and gentlemen, I made a point that needs to be reiterated. With all of this action the Democrats are taking toward impeaching Trump or proving Trump colluded with Russia — trying to disqualify Trump — the ultimate targets of all this are you and me and everybody who voted for Donald Trump. We’re the problem. Trump will come and go. As a president, the maximum number of years he can serve is eight. The people who voted for him are forever, because they have kids, their families expand and so forth, and the movement goes on.

Trump is the vessel. He’s the recipient of the support of this group. This is not to diminish Trump. I’m trying to tell you that we are the real objects of their hate. They despise us, folks. They literally hate us — that they can’t change our minds, that they can’t intimidate us, that they can’t persuade us to abandon Trump. It’s not that they’re not serious about getting Trump. They are. You take Trump out, where do we go? But when Trump’s gone, they’re not gonna stop this.

Another way to illustrate it is, hypothetically, let’s say that Mike Pence ends up as president here. You think this is gonna end? It’s only gonna intensify! If they’re able to get rid of Trump, they’re not gonna stop and say, “Mission accomplished,” and try to beat Pence in the election. They’re gonna keep going! There’s no stopping this. All there is, is defeating it. I’ve got a couple of audio sound bites — and I could produce a gazillion of them over the course of this program’s storied history. But just a couple in recent days.

Last night in New York City, on a local broadcast called Inside City Hall, the host was talking to the former New York City Public Advocate Mark Green (who used to like me but doesn’t anymore). He used to be on Firing Line with Mr. Buckley all the time. He was a liberal foil for WFB. So the host says to Mark Green, “I don’t think I’ve ever seen so many instances of so many people at such a high level in politics saying things that are not just shaded, not just untrue, but easily discovered to be untrue. There’s a brazenness I have not encountered before.” 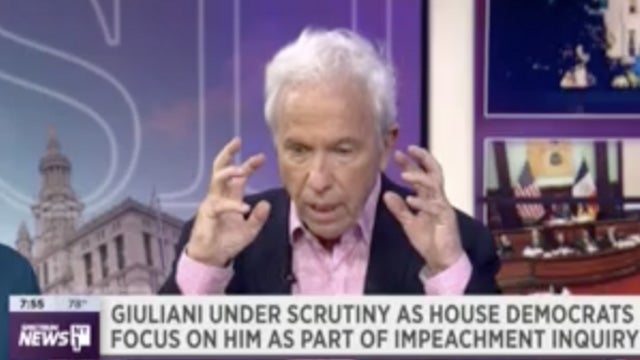 GREEN: The Republican radical reactionaries like Trump and now Rudy — and Pompeo! — they cater to 40% of the public who are cultists. I’m not saying they’re dumb or racist. They’ll swallow… They’re — they’re gullible, because they want to believe their guy, and so they’re gonna… They have content bias. It’s why Rush Limbaugh was so much more popular on radio than Al Franken. Al is funny, but careful.

RUSH: What is this “was” so much more popular? “Is.” You see here? You people are idiots! You’re nothing but mind-numbed robots, and I can say anything, and you’ll blindly follow along because you’re cultists. You don’t have functioning brains. You don’t think what you think on your own. This is the original complaint when this program started, that I was some Svengali and that you were mind-numbed robots and you wouldn’t know what to think without me.

They are so arrogant. It still amazes me that they have not endeavored to understand who their opposition really is — and maybe they do know and just practice this character assault and assassination ’cause it’s really all they’ve got. Th same thing happened later on CNN last night on The Lead with Jake Tapper. He had the senior political correspondent on, Nia-Malika Henderson, and the question, “‘I don’t know which one’s more dangerous, House Democrats, China, or Iran. That’s your tax dollars at work.'” He’s quoting Trump aide Peter Navarro.

Here’s the answer to that… 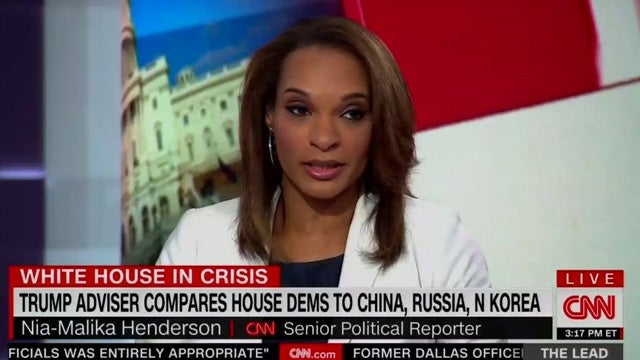 HENDERSON: This is I — I think a reflection of what they’ve been hearing, kind of, in the conservative chattering class. Uh, some of the talk show hosts. Uh, folks like Rush Limbaugh. It’s also, I think, their attempt to basically make this one long narrative, right? From the campaign to the Mueller probe to post-Mueller probe to kind of, uh, not make the Ukrainian issue a separate issue, because that’s what Democrats want to do. And so you have, uh, All the President’s Men out there essentially saying, “This is a Democratic plot.”

RUSH: All the President’s Men? See what they do here? They recap and categorize all this the way Watergate was written about by “Bernstein and Woodwind,” and then they go on here and start characterizing us as All the President’s Men and saying, “We want to look at this as all one issue and it’s not, it’s a separate issue, Trump and Ukraine’s a separate…” No, it’s not! It’s all part of the same coup attempt that the Democrats are running. Look, folks, when it comes to spying…

I don’t know if this woman knows, or if she’s just a trapped coconspirator — and I don’t mean trapped against her will. Just, you know, not curious. Just somebody going with the flow with the left wing and the Democrat media. (chuckles) How could you look at this and think it’s a separate issue? It’s only separate if you look at Mueller as a failure and Trump-Russia collusion overall as a failure. They think that this is some brand-new thing that’s come up that has nothing to do with anything that’s happened before, and it’s the exact opposite. My point is, it isn’t just Trump, folks, that they hate and want to do something about.

It is also you who support him, vote for him, who are conservative, you name it.