What, Donna Brazile? Don’t Use the Presidency to Pursue Your Own Political Interests?

RUSH: Here is the audio sound bite. This is Donna Brazile. This is what I saw. Now, I know you’re gonna say, “Rush, if you don’t want to watch it on Fox, why are you playing it for us?” That’s a good question. I will acknowledge it. The only answer to the question is because I want it straight from her mouth. I don’t want to have to be getting it wrong with a paraphrase. The question that she basically got here is, “What’s your reaction to Pelosi saying impeachment is not unifying for the country? What do you think about that?” 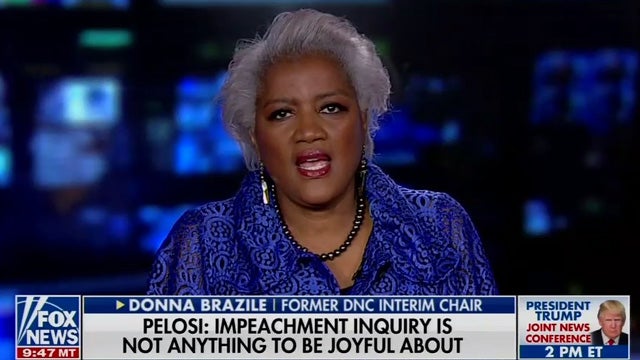 BRAZILE: It’s sad. This is a solemn moment.

BRAZILE: I take no joy of watching this unfold.

BRAZILE: I have serious policy disagreements with the president of the United States.

BRAZILE: — and we have to show once again I think as Americans that no American is above the law —

BRAZILE: — above the Constitution. And they should not use the office of the president for their personal political interests.

RUSH: Should not use the office of the president for their personal political interests is exactly why you run for the presidency! My goodness.

RUSH: Okay, Scoop, Elk River, Minnesota, great to have you. Thank you for waiting. Hello, sir.

CALLER: Hey, Snerdley told me to get right to the point. I’m gonna try but I’ve been outside freezing in this climate change for two hours.

RUSH: Yeah, I feel for you.

CALLER: President Obama was all about his own personal issues. He had to executive order everything that he wanted done, where Trump on the other hand, the people want stuff done — and they are blocking it at every chance.

CALLER: And I also wanted to say the first thing I ever ordered online in my life was Two If By Tea, and two Rush Revere tumblers.

RUSH: Is that right? Those are the first things you ever ordered online?

CALLER: The first thing I bought online ever was that.

RUSH: Well, God bless you. Did you like ’em?

CALLER: I’m gonna celebrate this call with a beer in my Rush Revere tumbler as soon as I hang up.

RUSH: (laughing) All right. That’d be one way to warm up. I appreciate the call, Scoop. Look, what he’s talking about is Donna Brazile said earlier today on Fox that the presidency is “not about advancing your personal political beliefs.” For crying out loud… (laughing) That’s precisely what it is about! That’s why you run, because you have personal political beliefs that you think are great for the country and you want them implemented. What in the world…? They’re trying to criminalize everything the guy’s doing within the confines of normal, everyday politics.

They are criminalizing identifying policy differences. That’s what scoop is reacting to. When Obama was doing this stuff, he was advancing his personal political beliefs against the will of the people! The American people didn’t want Obamacare, and they didn’t want half the executive orders the guy did! They didn’t want Iran to have a pathway to nuclear weapons! Obama did it anyway.