RUSH: I mentioned Charlie Cook. The Cook Report is the Bible, gospel inside the Beltway.

He’s a political analyst, polling analyst, all this stuff, and he’s out there saying (paraprhased), “I don’t think these Democrats should be doing this,” meaning impeachment. “I think it’s very risky.” This is a guru they listen to. This is from an interview that happened Tuesday, and this is Charlie Cook. The question he was asked, “Impeachment inquiry, what impact do you think it’s gonna have on the 2020 campaign?”

COOK: If I were Democrats, I don’t think I would do this. To me, it sucks all the oxygen out of the room. If I were a Democrat — 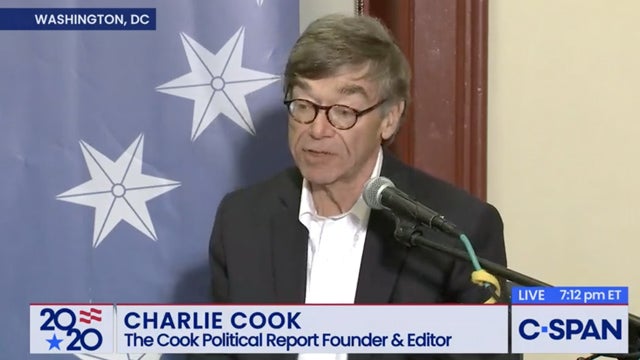 COOK: — I would want every bit of energy to be focused on winning a November 3rd election and not on this, regardless of what the merits may be, because I think having a focus on the election and impeachment are somewhat contradictory. And, you know, I’m not sure how great an idea if you’re a Democrat for the president to have a victory, uh, to be acquitted by the Senate.

RUSH: Yeah, see, that’s why it’s not gonna get that far. It’s why this is a campaign strategical event. They’re not gonna let it get to the Senate. There’s never gonna be articles of impeachment written. There will not be a case made and a trial in the Senate because if Trump’s acquitted, that’s it! The Democrats would have failed. That’s not what this is. It’s never intended to get there. But Cook’s point still remains. They’re trying to make everybody think they are engaged in impeachment, that it is real.

His point here is it’s sucking all the oxygen out of the room, and it’s focusing on trying to win an election by getting rid of your opponent. Through impeachment? This is not how people view impeachment and in the process they’re ignoring the campaign, they’re ignoring the issue, they’re making it look like they don’t care about the people of the country. And that is exactly right. They won’t listen to Cook. I just wanted to share his opinion.