RUSH: While I have time and before I forget it, here’s Pencil Neck — and I’ve been told that I can’t play this enough. People tell me now and then, “You need to replay that audio when Schiff gets punk’d by these two comedians from Ukraine trying to tell him that they’re the Russians with dirt on Trump.” I said, “I’ve played it five or six times.” “You can’t play it enough. People need to hear this! This is who the guy is.

“It’s proof that he’s been colluding with Russians. He was eager to collude with Russians,” and, by the way, it’s true. Schiff made it obvious here that he was willing to collude with Russians to get dirt on Trump. Now, this goes back to April 10, 2017. Trump’s been in office three months. A couple of Russian comedians known as Vovan and Lexus called and spoke with Schiff. They pretended to be the speaker of the Ukrainian parliament, whose name is Andriy Parubiy. Here’s a portion of the call between Vovan posing as the speaker of the Ukrainian parliament and Pencil Neck… 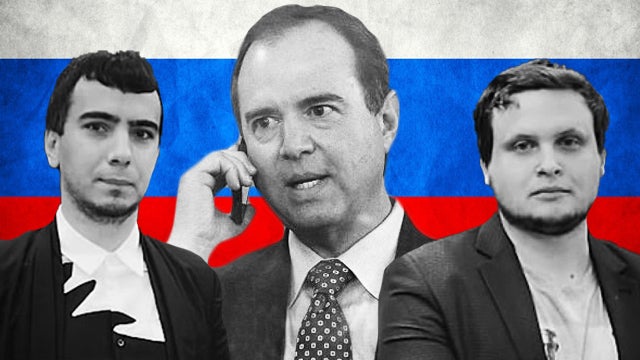 SCHIFF: Okay. And what’s the nature of the “kompromat”?

RUSH: (laughing) Do I need to explain this? (laughing) The first time I heard this, I said, “This is it for Schiff. He just been made a total fool of here. He’s just been made a total laughingstock.” But of course, our good friends in the media never saw fit to air this. Readers of the New York Times and the Washington Post and CNN don’t even know that this happened. So here. We’ll do this again. Now that you got a flavor of it, we’ve got a fraudulent guy, a phony, a comedian from Russia — a Russian comedian — pretending to be the speaker of the Ukrainian parliament calling Schiff and the first thing he says is he’s got naked photos of Trump.

SCHIFF: Okay. And what’s the nature of the “kompromat”?

RUSH: So the goddaughter of Putin gets that I could not photos of Trump, gives them to Putin, and Putin decides to (impression) “press on Trump.” That means use it to blackmail Trump. (impression) “Putin has negative photos of Trump from goddaughter of Putin, Sobchak. She shares those materials of Putin now, decides to blackmail Trump, Mr. Schiff!” This is what “press on Trump” means, and so the next comedian now, this guy, Vovan, steps in and takes over.

VOVAN: [W]e also know who was a mediator between Trump and Russian government who met with ex-advisor of Trump, Mr. Flynn. It was Russian singer, very famous singer, Arkadiy Ukupnik, who met with Mr. Flynn on Brighton Beach in Brooklyn in special Russian cafe: Langeron.

SCHIFF: What’s the name of the cafe?

VOVAN: Yes. It’s on the Brighton Beach. The most interesting thing is they used a special password before their meetings. They say it, “The weather is good on Deribasovskaya.”

SCHIFF: “Weather… is… good” in where?

VOVAN: “Weather is good on Deribasovskaya.” That is the name of a street in Odessa.

SCHIFF: A-a-and the code word is “Weather is good on ‘Zerabasta’?” (sic)

SCHIFF: “Deribasovskaya.” Okay, and — and I’ll have my staff call up to get spellings and more details on this.