Impeachment Not Going as Media Planned It 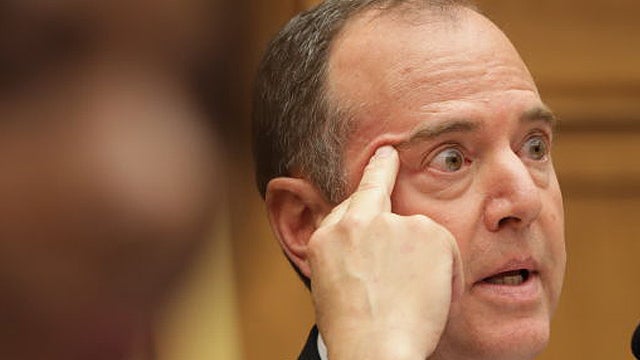 “This isn’t an impeachment. Actually send us a letter and do a floor vote and let’s see you get your 218 votes for this.” The White House and Trump have called the bluff, in other words. Let me start with this, ’cause I think you all need to hear this. It’s one thing when I tell you, but it’s another thing when you hear it from them. I have attempted to calm the stormy seas out there by telling you that whatever the Democrats are doing here, it isn’t taking.

He should have gotten 12 Pinocchios for telling the lie during the committee hearings about what Trump said during the transcript of the phone call with the president of Ukraine. But they’re still calling Schiff out for lying when he said (stammering), “I — I — I had no previous contact with the whistleblower!” You know, they’re serious about this in the media. The media is dead serious about impeachment. They’re far more serious about it than Pelosi.

Do not doubt me on this. And one of the reasons Pelosi is continually hounded is because the media wants this done. The media is the far left-wing fringe base of the Democrat Party, and I am telling you, they’re not gonna be satisfied if Pelosi doesn’t actually pull trigger and do this. The media knows that she hasn’t impeached anybody. The media knows that no formal impeachment proceedings have begun. The media knows it’s a campaign stunt or strategy.

They know there’s no impeachment. They’re fed up with it. Trump keeps talking about having the ChiComs investigate Biden, and it’s driving ’em nuts. They think Trump’s breaking the law right in front of their faces. They want Trump impeached yesterday, like AOC does. Except they’re not willing to drop it like she is. So Trump and his White House press gaggle today went over to Walter Reed to visit wounded warriors, and he again met with the press.

We got the sound bites coming up, and they keep shouting at him about (sniveling), “What do you mean the Chinese should investigate Joe Biden? That’s a violation law! You can’t do that,” and Trump — if he said it once, he said it 20 times — said, “I don’t care about politics. I don’t even think Biden’s gonna be the nominee. I told you way back, he’s not gonna win it. I’m not gonna tell you who I think’s gonna win it. But he’s not gonna win it.

“This has nothing to do with politics. This is all about corruption. If our government’s engaging corruption in foreign countries, we gotta root it out.” Let me tell you what foundation of that is. That is the Barr investigation. Trump is telling the honest-to-God truth here. If they’re gonna send Barr around, if they’re gonna investigate the beginnings of the Trump-Russia collusion investigation, that hoax — and they are. They are investing it. What was that? That was Hillary Clinton and the Obama administration and everybody else colluding with a foreign government.

That is corruption, folks. They engaged in an effort to undo a duly constituted presidential election. They were trying to reverse the election results, and they were colluding with foreign powers. They were colluding with Russia, the Steele dossier. We know that… God, the level of corruption these Democrats have engaged in in Ukraine, to me, is boggling the mind. Who knew that Ukraine was the center of the corruption universe for the Democrat Party? But it is! And it isn’t just Biden! It’s Hillary people and many people in the Obama administration.

So, anyway, Trump is saying, “We’re gonna get to the bottom of corruption. We cannot have government officials in our country corrupting and engaging in corruption in foreign countries,” and that is part and parcel of justifying the investigation that William Barr is undertaken to find out how this whole Trump-Russia collusion thing began. So Trump is telling the media ’til he gets blue in the face, “It’s not about the campaign. It’s not about Biden.

“I don’t even think Biden’s gonna be the nominee. Biden can’t win anything. It’s not about that. It’s about corruption.” They don’t believe it. They think he’s practicing misdirection and all of that. So, since it is the media that is really, really lighting the fuse here on impeachment, they want it. They are trying to push Pelosi. They’re trying to push the whole Democrat Party into this. They’re the ones that want Trump gone. They hate Donald Trump — and for obvious reasons.

They hate Trump because they failed in making sure he didn’t win. Their candidate was Hillary. They were all-in for Hillary. They did everything they could to make Hillary president to help her win. Trump beat them. Ah, ah, ah! Intolerable. So they hate him from the get-go for that. Next they hate him because they can’t get rid of him any other way. They couldn’t get rid of him during the campaign, they weren’t able to reverse election results, so now they want him impeached.

And I’m telling you, folks, there’s not an exception. I addressed this the other day. It is stunning, is it not, that among all of the journalists in this country, all of them — you know, particularly those in the New York-Washington corridor. It’s amazing, is it not, that there isn’t a single one of them that does not exist on the same page? There’s not a one of them! They are all identically predisposed. They are all writing and reporting practically the identical things every day.

They are manufacturing identical claims, crises, violations of law, whatever. It really is one of the most glaring, egregious examples of groupthink I have ever seen in my life. Not a single — not a single — journalist is at variance with this agenda, and that’s all you should be need to know to know that they’re not journalists. They’re simply Democrats in the media. So they are hell-bent. I’m gonna tell you, whatever Pelosi does or doesn’t do, they are going to continue this narrative that Trump has been impeached.

I’ve tried to calm the waters and told everybody here to just chill for a minute because this is not playing out the way they have thought it would be. Now we have some evidence. We’re gonna start here with audio sound bite number one — and this has to kill ’em, folks. Last night on CNN’s Erin Burnett OutFront, we have a portion of a report from Democrat in the media Miguel Marquez about how Trump voters in Macomb County, Michigan, are reacting to the Democrat push to impeach President Trump. 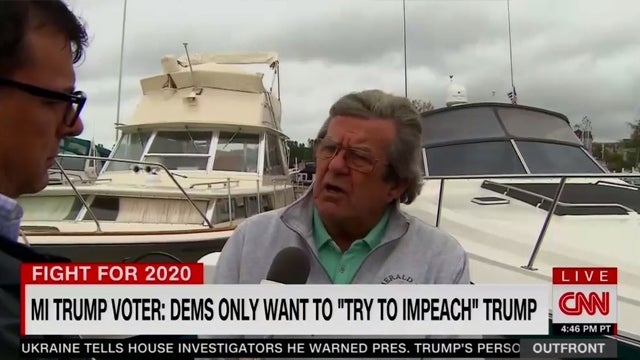 MIGUEL MARQUEZ: Did you vote for the president or Clinton in 2016?

MIGUEL MARQUEZ: For the president? Are you still just as happy with him?

MIGUEL MARQUEZ: (voiceover) Some of the president’s supporters are on the fence, but most we spoke to see impeachment is little more than politics.

MATTHEW KALINOWSKI: I think it’s a lot of just people don’t like him and they want him out of office. The left and the media.

MIGUEL MARQUEZ: John Scantze voted for Trump in 2016 and had concerns early on. Six months ago, he thought Joe Biden might be an option. Now he says the push for impeachment has him supporting the president more than ever. 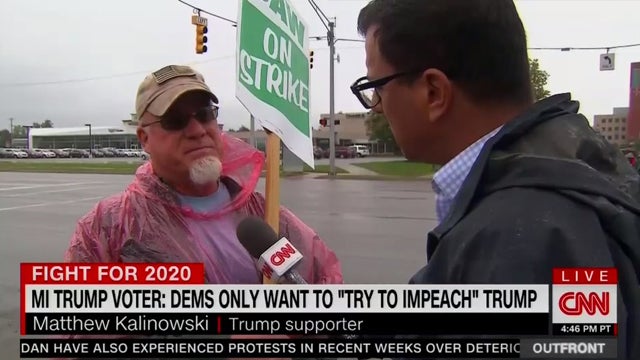 JOHN SCANTZE: They are there for one thing now and one thing only, and that’s to try to impeach the president.

RUSH: Wait a minute. Wait a minute. This is Michigan. This is Michigan. This is where the Democrats are gonna fix the mistakes of 2016. They’re gonna go in there and they’re gonna win Michigan this time. They’re not gonna let Trump win it this time. So they send a reporter out there to find out how many Trump supporters have given up on him and support impeachment, and they couldn’t find any. After that report ran, CNN’s Erin Burnett OutFront turned to former advisor for Obama Van Jones about the report they had just watched.

She says, “You’ve talked to so many voters. Is what you’re hearing sounding a lot like what Miguel Marquez,” our Democrat in the media reporter “heard?” 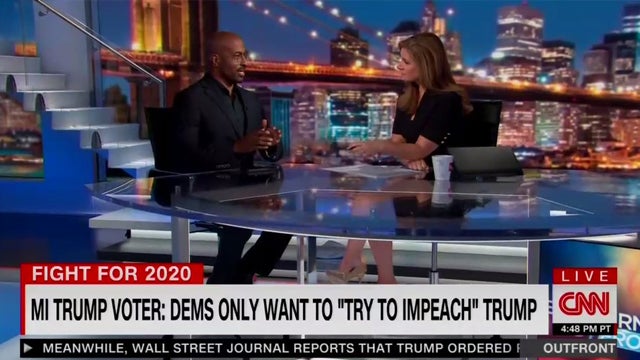 JONES: Yeah, you know, it’s interesting because it’s a tricky thing, the impeachment, uh, process. Because for some Republicans it makes them more to rally around the flag. I remember when I, uh, was anti-Bill Clinton from the left, uh, in the nineties, and then they tried to impeach him and suddenly Clinton was my best friend. I was up, “Hey, leave Bill Clinton alone.” You know, uh, you get crosscurrents in those things. At the same time, you know, the Democrats are in a lose-lose situation. If they don’t do something their own base is gonna be disappointed and you feel like maybe, uh, Trump gets away with too much. If you go through with the impeachment, though, you can divide the country further and you still don’t solve the problem of foreign interference. It’s a big mess.

RUSH: He’s hearing the same thing. “It’s a big mess.” It is not going as they had dreamed it would go out there. It’s not going as they had planned. There is not massive, universal support for impeaching Donald Trump. In fact, they are finding more Trump voters more solid than ever. People that were predisposed to abandoning Trump six months ago have now decided — because of this — they’re gonna be locked in on Trump even more than they have been.

And I’m telling you, this is probably much more common a reaction than what the Democrats and the media are hoping is happening out there. They are way, so way overplaying their hand.