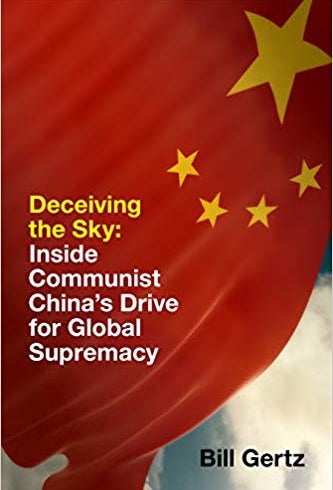 At one of their “reeducation camps” for Muslims in China… They actually take ’em to reeducation camps and try to purge thoughts of terrorism. That’s what they will tell you that they try to do. “We’re trying to eliminate from their brains thoughts of terrorism.” It’s ChiCom mind control. Now, Bill Gertz — who has been maybe the best pure journalist on the American Department of Defense and Pentagon — has a new book out about the ChiComs called Deceiving the Sky.

It puts into easily, scarily understandable terms the threat posed by China, not just to us, but to the world. You know, here’s Biden last May, “Come on, man, the Chinese? They’re not competitors with us. They don’t compete with us. We’re under no threat. They’re no threat. Come on, man. The Chinese?” It’s the exact opposite. The Chinese represent a huge threat.

They’re communist, for crying out loud! And Gertz has the guts, the details, and it’s really good. And if you have the slightest bit of interest, then this is the book on China that you should read. This is not some China expert in a political sense. This is a Department of Defense national interest expert, Bill Gertz, and it’s called Deceiving the Sky.