RUSH: Here’s President Trump. Stand by if you’re on the phones. We’re coming to you. This morning outside the White House on his way to the helicopter to fly over to Walter Reed, a male reporter said, “This letter that you’re gonna send to Pelosi, what does it say?”

THE PRESIDENT: We’ll be issuing a letter. As everybody knows, we’ve been treated very unfairly, very different from anybody else. Everything, to me, is about corruption. We want to find out what happened with 2016. And as you know, there’s a lot of work going on about that. I don’t care about Biden’s campaign, but I do care about corruption. His campaign, that’s up to him. Politics, that’s up to them. I don’t care about politics. I believe there was tremendous corruption with Biden, but I think there was beyond — I mean, beyond corruption — having to do with the 2016 campaign, and what these lowlifes did to so many people to hurt so many people in the Trump campaign.

RUSH: See, this is what it’s all about, I’m telling you. This is all about providing a foundation for the investigation that Barr is doing. Barr is out there. He’s been to Italy. He’s been to Ukraine. He’s going a lot of places where the seeds for the anti-Trump investigation began, trying to prepare all of the details for everybody. And Trump has been asking Ukraine to… That’s what the phone call to the Ukrainian president was really about. 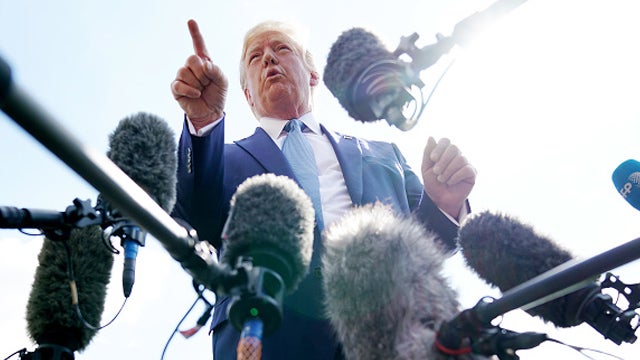 Here Trump is telling everybody again (translated), “I’m not trying to dig up dirt for my political opponent. That’s not why I’m doing this. We gotta root out corruption.” Donald Trump feels that the entire Russia collusion investigation was the epitome of corruption and that he was the victim of it, and he’s right. They ran a coup! They ran an operation to reverse the election results. You know the drill on this by now. Trump wants to get to the bottom of it.

So he’s focusing on rooting out corruption. The very people complaining that Trump is trying to involve foreign leaders in this… Trump is trying to get to the bottom of which foreign leaders were used by the Democrats, the FBI and the DOJ, to undermine him! That’s what this is about. Another reporter said, “Is anyone advising you that it’s all right to solicit the help of other governments to investigate a political opponent?”

THE PRESIDENT: There was… In the 2016 campaign, there was tremendous corruption against me. If we feel there’s corruption, we have a right to go to a foreign country — and just so you know…

THE PRESIDENT: I was investigated by the Obama administration.

RUSH: Exactly right! Make no mistake what this is. He’s trying to root out every bit of this corruption, most of it that was aimed at this coup that was run against him. Another reporter: “Would you be more willing to do a trade deal with the Chinese if they were to investigate Biden?”

THE PRESIDENT: They’ve taken away our rights. So if they proceed — and, you know, they’ll just get their people. They’re all in a line, because even though many of them don’t want to vote, they have to no choice. They have to follow their leadership. And then we’ll get it to the Senate and we’re gonna win. I really believe that they’re gonna pay a tremendous price at the polls. And we saw the first glimpse of it two weeks ago in a great state, North Carolina. Nancy Pelosi will lose her speakership right after the election when the Republicans take over the House.

RUSH: All right. That was the president today outside the White House about a couple of hours ago.