Hillary Says She Wants a Rematch with Trump

RUSH: Now, Hillary Clinton. I want to take you back to me. I’ll get to the phones here in just a second. Hang in there, be tough. October 9th. No, wait. Yes, yes, yes. Grab number 2. I meant to play number 2 first. Number 2. September 27th on this program, I told you that I had heard rumblings that Hillary Clinton was thinking about getting back in the presidential sweepstakes of the Democrat Party. I just want you to remember what I said here.

RUSH: Wait a minute. What the hell was that? We must have been playing that thing at three-quarter speed. That Hillary voice sounded like a man. Play that again. Did that play at the right speed? The first voice here is supposedly Hillary. Play that again. Three, two, one, go.

RUSH: I’m telling you, that’s Hillary and Trump. You can recognize Trump. When you slow Hillary’s voice down, she sounds like a guy. I’m just saying, “When you slow the voice down…” Here! Play it again. I don’t know what’s wrong here, but it is what it is. Just hearing it one more time. I swear to you…

RUSH: Oh, man! We got it right! We got it the right speed. That was awesome! One of the best comebacks in presidential debate history, better even than Lord Bentsen comeback at Dan Quayle. Okay. So last night on PBS’ The NewsHour (formally with Jim Lehrer), Judy Woodruff spoke to Hillary Clinton. She said, ‘The president tweeted just this morning — I’m gonna quote — I think that Crooked Hillary Clinton should enter the race to try and steal it away from Uber Left Elizabeth Warren. Only one condition. The Crooked one must explain all of her high crimes and misdemeanors including how & why she deleted 33,000 Emails…'”

And here’s Hillary’s reaction to that…

HILLARY: It truly is remarkable how obsessed he remains with me.

HILLARY: Um, but this latest tweet is, um, you know, uh, so typical of him. Uh, nothing has been more examined and looked at the than my emails.

RUSH: (laughing) What a crock.

HILLARY: We all know that.

RUSH: You’re full of it.

HILLARY: So he’s either lying or delusional or both. There was no subpoena, as he, uh, says in a tweet this morning. Uhh, so maybe there does need to be a rematch. I mean, obviously I can beat him again. 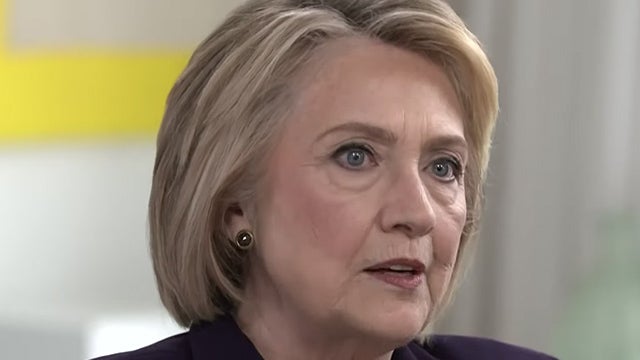 RUSH: “Obviously.” Did you catch that? “I can beat him again.” She still thinks she got cheated. If somebody’s obsessed with somebody, it’s Hillary Clinton obsessed with Trump. Okay. Let me grab a quick call here. We’ll go to Denise in Chicago. Great to have you up first today on the EIB Network. Hi.

CALLER: I just want to say that I’m 100% behind this president and I’m so proud of him. You know, the Democrats have been having a gunfight in this country for 30-plus years, and the Republicans always go with their knives — and we finally have a guy who actually went with a gun. They do not know what to do with themselves, and I hope that he continues to move forward to get the truth out to the American people, because this is exactly what we need.

CALLER: The Democrats are now in uncharted waters with Trump being president.

CALLER: I support him 100%. I hope that he continues on this course with his legal team, putting Barr in place, putting Durham in place. This is what the American people need. We finally have a president who’s actually fighting for America.

CALLER: For the first time!

RUSH: And for the people that the voted for him.

CALLER: Yes! Yes! And I am so proud of him, and I hope that he keeps moving forward with this, with his plan for America because it’s working. The Democrats are in uncharted waters.

RUSH: Quick question: Do you think Pelosi will actually call for an official impeachment vote or not?

CALLER: That’s a good question. I hope that she does, but I cannot see how they will be able to do it. I really —

RUSH: I appreciate it. I’m out of time, but thanks. When she answered that question, she said, “Good question,” because I asked it. I don’t waste time on bad questions.