RUSH: ABC News has been running video of what they are calling the slaughter in Syria. By the way, I think this policy decision Trump made, I think before it’s all over, I think the Democrats might figure out this is the way to go. That would be trying to criminalize policy. They might try to go after Trump on the basis this guy’s incompetent, doesn’t know what he’s doing. He threw our allies, the Kurds overboard, then he had the guts to say the Kurds didn’t help us at Normandy, who the hell does this guy think he is? That would make more sense than these magical, made-up events that didn’t happen. So, we’ll see. 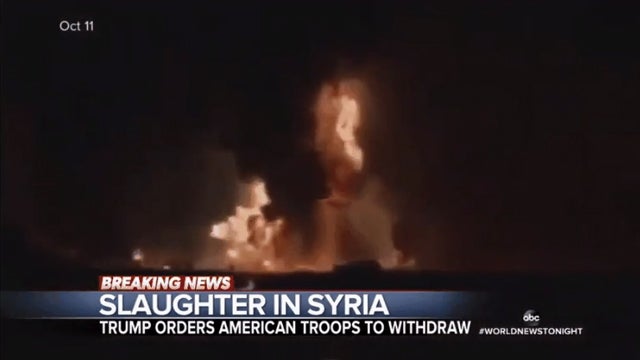 ABC News is running video now of what has happened in Syria since Trump decided to pull our troops out. And wouldn’t you know there is a genocide going on. Yes, my friends, there is a slaughter occurring in Syria. And ABC News has the video, except the video isn’t from Syria.

ABC aired supposedly shocking footage this morning purporting to be from the frontline battle between the Syrian Kurds and the invading bad guys, the Turks. The only problem is the footage is from a nighttime demonstration at the Knob Creek Gun Range in West Point, Kentucky. It is not from Syria.

You know, I’m watching all these media people talk about how damaging it is when the press makes things up or when they doctor photos or whatever. What do you mean, when they doctor photos or make things up? That’s the rule of the game today! Remember the 911 call made by “white Hispanic” George whatever his name, the guy supposedly shot and murdered Trayvon Martin. NBC edited the call, they edited the call to make it look like the “white Hispanic” was a racist pig!

They totally eliminated the questions being asked by the 911 operator. This is legion! There’s nothing new! Fake news. This stuff’s been going on even before Trump! So now they’ve got footage of a frontline battle from a nighttime demonstration at the Knob Creek Gun Range in West Point, Kentucky.

Becket Adams has the story in the Washington Examiner. “After seeing a comment from Wojciech Pawelczyk, I began making some calls. As of this writing, it appears” that this video is a hoax and ABC has finally pulled it down. “We’re still investigating,” a representative for the gun range told the Washington Examiner on Monday adding the images aired by ABC looks to be from the Kentucky property. “As of right now, it seems to be our footage,” said the Knob Creek Gun Range spokesman.

A spokesman for ABC conceded they made a mistake. Yeah, they got caught. “We’ve taken down the video that aired on World News Tonight Sunday and Good Morning America today that appeared to be from the Syrian border. We took it down immediately after questions were raised about its accuracy.” How did it get past your editing process in the first place? Are you trying to tell me that Knob Creek Gun Range looks enough like Syria that you people weren’t even suspicious? And I’ll guaranty you they weren’t.

They don’t need any sources anymore. They don’t need any identifiable sources. They don’t even need any proof. They just need somebody to be the fall guy that they can lay it all off on as the anonymous source. “’This video, obtained by ABC News, appears to show the fury of the Turkish attack on the border town of Tal Abyad,’ senior foreign correspondent Ian Pannell, who is in Syria, said Monday on Good Morning America.”

So they got a reporter in Syria playing a video from Kentucky telling us that the video looks very much like what’s going on to him in Syria. I probably shouldn’t mention this, but the late Cokie Roberts, ABC News, once put on a raincoat, stood in front of a green chyron screen where ABC made it look like she was standing out in the rain and snow to do some kind of report in the rain and snow, but she was safely ensconced in the studio.

These kind of tricks the media plays all the time. Some of them are harmless like the Cokie Roberts, it was a local Washington story, but this is full-fledged illusion creation. This is lying to news customers. And the correspondent on the ground in Syria playing video from a protest attack at the Knob Creek — by the way, that’s great bourbon. Have you ever had any, Brian? You ever had any Knob Creek? Oh, you haven’t had any Knob Creek? Knob Creek on the rocks, maybe it’s what led to the shooting, I don’t know, but, man, you should try it.

RUSH: To Monrovia, California. This is Alan. I’m glad you called, Alan. Welcome to the show.

CALLER: Hi, Rush. I’d like to speak a little bit about the controversy surrounding President Trump’s decision to remove our troops from Syria. And I think if we take a good look at his speech at the Minnesota rally, right in the middle of the speech for about 10 to 12 minutes he goes off script and he tells us what a gut-wrenching emotional experience it is for him to go to Dover Air Force Base where they receive the bodies of our fallen heroes and how difficult it is for him to stand there on the tarmac and watch as the ramp at the rear of the plane is lowered and the flag-draped casket comes into view, and how difficult it is for him to stand there with the families and with the heart-wrenching crying and wailing. He even explained that there was an instance where a mother jumped on top of the casket. So I think we get a lot of insight about President Trump’s mind-set from those 10 to 12 minutes of that Minnesota rally speech.

RUSH: Yeah, he said all of that, and also that signing the letters to the families is the toughest part of the job. Now, he looks at it also as keeping campaign promise. Do you think that’s true as well?

CALLER: Yes, I think that’s true. In his speech, he mentioned the signing of the letters and how he can’t understand why we would continue to go through that where we have instances where we train these soldiers in other countries, and the minute we give them a gun, they turn it on us and shoot us in the back.

RUSH: All of that’s true. I’ll tell you, though, this decision that he made is something… I want to be very quiet about this. But I wouldn’t be surprised if the Democrat at some point try to fold this into their impeachment. You say, “Well, wait a minute. What’s the high crime and misdemeanor?” Well, “high crime and misdemeanor” can encompass anything, including if they want to say dangerous incompetence. But this is a policy decision that the Democrats might think they could make some hay on. Trump is being consistent with campaign promises. That shouldn’t surprise anybody. But this is not going away any time soon as an issue.

Glad to have your take on it as somebody who saw the address.