How Impeachment Is Failing in Ohio and Beyond

So after explaining what the first paragraph meant, they then tell their readers why what it means matters. And then they continue with the story. It’s a new formatting experiment where they’re attempting to make their news presentation look different. But the problem is it’s all the same stuff. It doesn’t matter whether you read the New York Times or the Washington Post or watch CBS, ABC, CNN or NBC. It’s all the same. In that sense it’s amazing.

It’s all the same. And the news cannot possibly be all the same. In fact, folks, this is a teachable moment in fact. The Drive-By Media constantly whines and moans that there is not a common set of facts from which the American people can make important decisions such as voting and public policy. Yeah, and there hasn’t been since 1988. 1988, when this program started, started the wave that resulted in the busting up of the monopoly the Drive-By Media had.

And now you’ve got a clear example of what it was. Even back in the days, in the 60’s and in the 70’s, it was all the same. It didn’t matter what network you tuned into. It didn’t matter what newspaper you read. It was all the same. Now, there were conservative newspapers, like the St. Louis Globe Democrat was a conservative paper compared to the St. Louis Post-Descratch. But New York had five or six newspapers, and there was a conservative paper in the bunch. But national news was all Drive-By. National news was all left-wing. 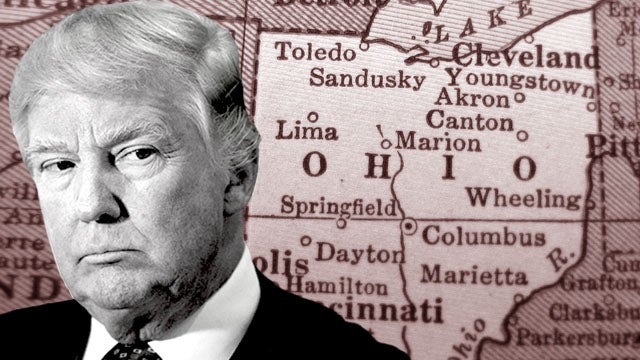 And there wasn’t any counter to it. And it’s exactly what it is today. It’s all identical. It didn’t matter what network you watched or what newspaper you read, you got the same garbage. You got the same stories in the same order and the same take. I’ve just been handed a note. Let me read it quickly. Okay. I got a little info here on what Doug Collins is doing. Thank you, Mr. Snerdley. Let me finish this thought.

So now we’ve got this uniform presentation of what the news is, and it is in total, total cooperation with Democrats in the media and Democrats in Congress, the House and the Senate and Democrats everywhere, and then you’ve got us and other elements of the so-called alternative media, New Media, what have you. It’s a great microcosm of what they want to go back to where Americans had one set of facts.

So, anyway, Axios went out to Ohio, left-wing publication aiming at the Millennial audience. Headline: “Focus group: These Ohio Swing Voters Are Outraged Over Impeachment.”
Dateline Youngstown, Ohio. “Swing voters in this Rust Belt state are expressing a range of unease about impeaching President Trump, from fears it will hurt the economy to frustrations that House Democrats are more invested in going after Trump than in helping people.”

Well, where have we heard that? That’s almost verbatim from my oral cavity. That’s almost verbatim what I’ve been pointing the last two weeks. I don’t mean to make it about me. But the Democrats don’t care about the little guy. They don’t care about prescription drug prices or health care or illegal immigration or any of that. And they’re spending taxpayer dollars to further their own political ambitions and desires.

And so now focus groupers are saying this to the focus group testers. This is great, actually. Oh, here’s the “why it matters” paragraph. I love this. Here, let me do it again. “Swing voters in this Rust Belt state are expressing a range of unease about impeaching President Trump, from fears it will hurt the economy to frustrations that House Democrats are more invested in going after Trump than in helping people.”

That’s pretty clear, right? But for the Axios audience they need to have it explained to ’em. “Why it matters: If such sentiments last and play out on a larger scale across pivotal states, it spells trouble for Democrats unless they can reframe what they’re trying to accomplish.” So the first paragraph did not provide that information. They had to do the “why it matters” paragraph for the Axios reader.

“Distraction, unease, exhaustion — these were some of the main takeaways from our Engagious/FPG focus group last week. We heard from 8 voters who flipped from Barack Obama in 2012 to Trump in 2016, and 3 who switched from Mitt Romney to Hillary Clinton. The findings are a counterpoint to the latest national surveys — including a Fox News poll –” Oh! The Fox News poll. By the way, remind me to make a point about somebody has run around and redone the Fox poll if it were properly sampled. And it shows that only 44% would favor impeachment, not 51%, if it were properly sampled.

So the findings in this focus group are counter to the latest national surveys that show more and more Americans now favor impeaching and removing Trump. “While a focus group is not a statistically significant sample like a poll, these responses show how some voters are thinking and talking about the 2020 election in crucial counties.”

Then they have a “what they’re saying” section. And this is quotes from the people in the focus group. “Participants shared their thoughts about the Democrats. ‘They need to focus on the real issues,’ said Judy D., a 60-year-old Trump voter. ‘[Nancy] Pelosi hates him so bad, I just think she needs to drop it and worry about the country.’ ‘They need to be concentrating on the country, not what he’s doing wrong,’ Deborah G., a 56-year-old Clinton voter, said. ‘They hit a big strike on Mueller, so this is trying to get another base hit on the president,’ said Eric B., a 34-year-old Trump voter. ‘It’s become more of … “Destroy the other party” instead of build the whole country up,’ said Richelle W., a 40-year-old Trump voter.”

And then Axios says, “Before getting serious about impeachment, House Democrats worried the timing was too close to the 2020 election and could backfire.” Are you kidding? The only people worried about that was Pelosi. And she lost to the surge of the base. “One man, Rocco P., a 40-year-old Trump voter, offered this advice to Democrats: ‘Just drop it. Beat Trump at the ballot box,’” if you care so much. 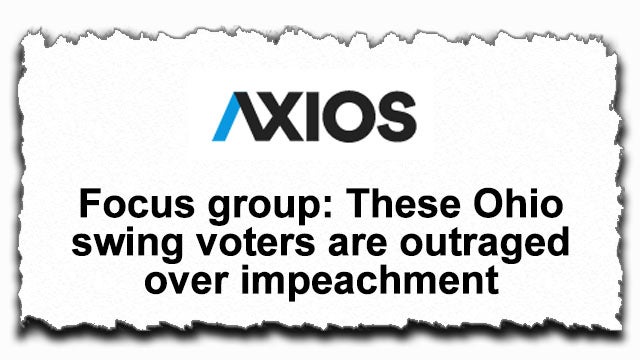 “Nine of the 11 participants raised their hands to say impeachment is a distraction –” You could take this focus group all over the Midwest, and you wouldn’t find anything different. I’m telling you that average, ordinary Americans, no offense, are seething at this.

So what they ended up doing, 38% were independent instead of like 12% in the poll. So they weighted, w-e-i-g-h-t-e-d, they weighted, they simply gave Democrats more presence and Republicans less presence expressed as a percentage. That’s a big, big difference. The poll has 48% Democrats, but the area they did the poll only had 39% Democrats in it.