Project Veritas Is the News, Not Some Video Nobody Saw

RUSH: There is another video out there, a video that Trump and his campaign had nothing to do with, a video that has been virtually seen by no one is a major headline all across Drive-By Media today. You know what ought to be the big headline across Drive-By Media today? James O’Keefe at Project Veritas has found a CNN whistleblower. A CNN whistleblower recorded hours of secret video of Jeff Zucker — the CEO and chairman of CNN — and other people in there, documenting and making clear their hatred for Trump and how it flavors their coverage.

They make it clear they are not engaged in journalism. Now, you might say, “Rush, this is no big surprise. We know this.” This is them admitting it. This is somebody at CNN who was fed up working there, who took the job of journalism seriously and hated what he was seeing. The CNN people routinely mock Fox, rip into Fox, rip into Trump supporters, rip into Trump. This should be a lead headline in a number of places, but so far? Nothing. 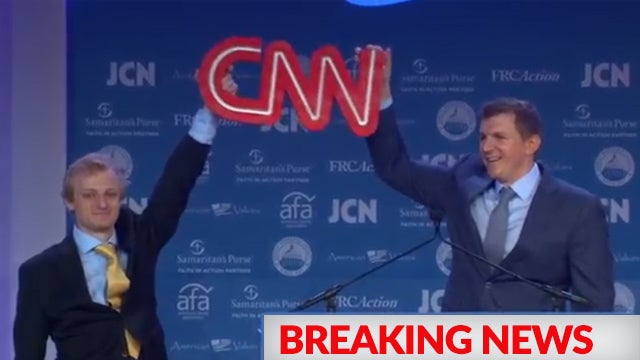 No, instead it’s a video that Trump and his campaign had nothing to do with, seen by virtually no one. There was a conservative conference at the Doral resort that Trump owns down in Miami. And there was a video played in private room by somebody — very few people in the room — and it was typical fake video, now. Fake news. It was using the latest techniques to doctor video. And there were scenes of Trump — a fake Trump — shooting and stabbing and brutally assaulting members of the news media and his political opponents.

It was shown at a conference for his supporters at his Miami resort in an off, out-of-the-way room. There were very few people in the room. It’s another illusion made to look like the Trump campaign made video for entertainment purposes to show their supporters, “This is what Trump’s doing! He’s literally murdering the opposition. It was supposed to be applauded and so forth.” The whole thing is made up! It’s fake video.

Hardly anybody has seen it. The Trump campaign’s got nothing to do with it. It’s a plant! And it is headlined across Drive-By Media today. I’m telling you, the smart thing to do, just your gut, knee-jerk reaction to anything that you see in Drive-By Media that doesn’t make sense… Chalk it up to the ongoing illusion they are creating that there is massive criminality, massive wrongdoing, massive incompetence, massive misconduct leading everybody to believe Trump has to go.