RUSH: Mr. Snerdley, did you watch the debate last night? Did you happen to see the ad in the middle of the debate sponsored by the Freedom From Religion…? (interruption) Let me tell you something. Let me tell you something. What a perfectly placed ad! Let’s say that you are a group of idiots. You’re a group of wackos. You are miserable and you were unhappy, and you hate religion. You hate everything about it! You don’t like religion being in your face.

You don’t like living in a country that is deeply rooted in the Judeo-Christian religious ethic. You just hate it, and so you want to let everybody know how much you hate their religion and how much you hate them forcing their religion down your throat. So what do you do? Where would you buy an ad? Why, what better place than the Democrat Party presidential debate — and that’s what this group did! 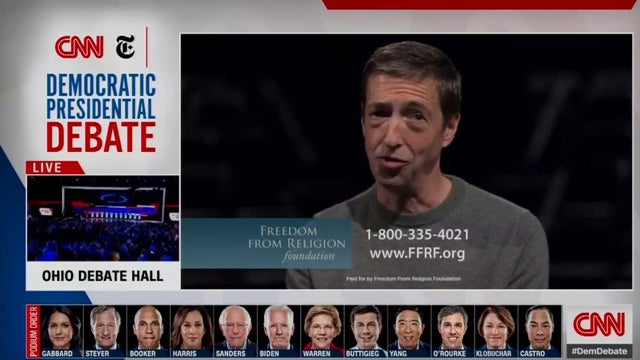 The Freedom From Religion group, whatever it is. Ron Reagan — the son of Ronaldus Magnus, Ron Reagan — was the spokesman. Let me check real quick. I want to see… We may not have it ’cause we don’t give away advertising on this program. They didn’t buy time here because we wouldn’t sell it to them. (muttering) Nope! Don’t have it. I don’t need it. I can tell you exactly what this was. This was Ron Reagan, who is bitter and angry over a lot of things, so he was the perfect spokesman to hire.

He’s on camera proudly representing the Freedom From Religion… This is an ad right in the middle of the Democrat Party debate, and he goes through this script talking about how oppressive religion is and how you don’t have to succumb to it and there’s a whole lot of people that haven’t and here’s a pitch to join us at the Freedom From Religion group, and the tag line delivered by Ron Reagan was (dadelut, dadelut, dadelut), “I’m Ron Reagan, not afraid of burning in hell,” and they cut right back to the Democrat debate!

It may be one of the most perfect ad placements in the history of advertising! You want to reach a bunch of people that don’t like God, don’t like religion, and have no fear of hell because they don’t think it exists and so they don’t mind burning there? (laughing) Run this ad in a Democrat debate! (laughing) Oh, man! It’s one of those unforced errors, one of those things you couldn’t predict. And I’m sure these people think they’re helping the Democrats and helping themselves!

But what a perfect ad, a perfect commercial for tying into the overall mind-set, ideas, agenda of the Democrat Party. What was great about it was that the Democrats on the stage had no idea this ad had run! But you know what else was second great about it? They didn’t go full screen commercial! They kept the Democrat candidates on the left half of the screen. Like in an NFL game with a 30 second time-out in the last two minutes, they keep action on the field.

There’s no action, but they keep a view of game action on the field — whatever’s going on on sidelines or whatever — while the commercial running on the right half of the screen. That’s what they did here. So there’s no debate happening. They’re in a commercial break, but they kept the camera on the Democrat candidates while Ron Reagan is going on and on and on about what a bunch of rotgut religious people are. (laughing) I’m rubbing my hands together in glee when that happened. Okay. Let me take another brief time-out, folks. We have an obscene profit break — and I promise you we will never have an ad from the Freedom From Religion group on this program.

RUSH: So you had… (laughing) So you had the Freedom From Religion Ron Reagan not afraid of burning in hell right in the middle of the debate, then the last question you have Anderson Cooper asking, “Okay. So Ellen DeGeneres sat down with George Bush. Any of you have relationships with people that might surprise us?” You know what that’s like? 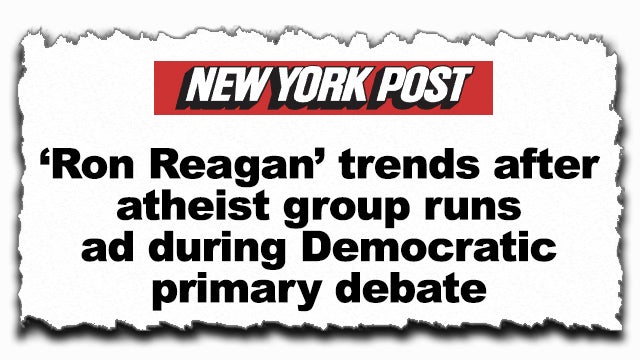 That would be like a bunch of people asking Mahmoud Ahmadinejad, “Do you know any Jews? Have you ever met a nice Jew?” Or asking somebody from the Nazi Party. I mean, it was the strangest thing! Like, it would have been a very odd answer if any of those people had any friends who were Republicans — and it would have been fighting words if they said they did! You talk about out of touch and way gone?

RUSH: Okay here is the Freedom From Religious Foundation ad starring Ron Reagan, the son of the former president Ronaldus Magnus. Now, let me set the stage here, folks. Hee-hee-hee. We are halfway into the Democrat debate so it’s about 9:30, approximately 9:30, could be about 9:15, but it’s about halfway through. And there aren’t very many commercial breaks in this debate. There are just enough that you notice when there is one when they go to break.

Now, in this particular commercial break, they did a split screen. On the right half of the screen the commercial for the Freedom From Religion Foundation ran which is Ron Reagan on camera. The left side of the screen was a wide shot of the candidates standing at their “podii” during the debate, chatting with one another waiting for the commercial break to end to resume heated contest. So this is a debate, the Democrat Party discussing the issues that they think matter most to the American people.

Here you have a bunch of anti-religion freaks, a bunch of atheists, a bunch of agnostics, and they want to reach the largest audience they think they can. They choose CNN and a Democrat Party debate. Is that not nailing it? This is one of the most well-placed ad buys I can remember in the history of ad buys. I mean, you wouldn’t place an ad for Disneyland in an old folks’ home, for example. All right. So here we go. It’s just… It’s 29 seconds in three, two, one…

RON P. REAGAN: Hi. I’m Ron Reagan, an unabashed atheist, and I’m alarmed by the intrusions of religion into our secular government. That’s why I’m asking you to support the Freedom From Religion foundation, the nation’s largest and most effective association of atheists and agnostics working to keep state and church separate, just like our Founding Fathers intended. Please support the Freedom From Religion foundation. Ron Reagan, lifelong atheist, not afraid of burning in hell.

RUSH: And he had a little smirky smile on his face. “…and now we take you back to tonight’s Democrat Party debate.” Ha! (laughing) Is this perfect or is it perfect? “Ron Reagan, live long atheist not afraid of burning in hell,” and that snarky-snarky little smile, looked like Peter Strzok Smirk after having a meeting with Page. Man, oh, man, oh, man. And then back to smiling Anderson Cooper. (laughing) It’s the highlight of the debate for me.