The Democrats’ Impeachment Narrative Has Broken Down

RUSH: So again, folks, I want to note… Sometimes, marketing says let people figure it out on their own what you’re doing.

Other times, after you’ve done it, you tell them what just happened. I want to review the first hour for you because I don’t want there to be any mistake. Wherever you go in the media today, it doesn’t matter where, everybody is focusing on Pelosi and what she said, and Trump had a “meltdown,” and Trump is unfit and, “We need to pray for the president.” I’ve got all the sound bites. Let me count them here. Seven, 10, 11… The first 10. I could have spent the first hour just reviewing what you’ve heard if you pay attention to the news anywhere.

I chose to do something different: Screw the narrative and tell you the truth of what’s really going on, which is what we do here every day. But it’s rooted in the very pursuit of the truth, not trying to be different. It’s not hard to be different when everybody else is doing the exact same story in the exact same way using the exact same terms and words. But what all this means, what all of this is about is that their impeachment narratives are breaking down. They have lost the whistleblower story. That’s gone now as a reason to impeach. 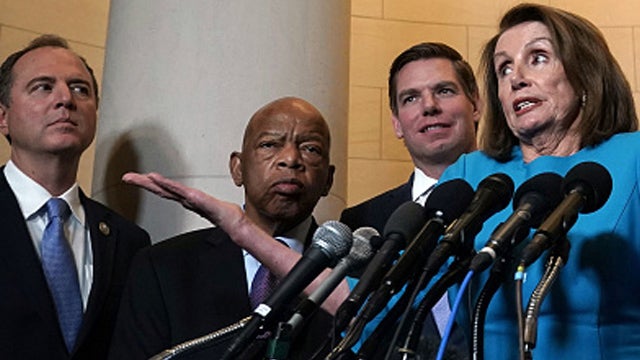 They’ve moved off of it. It didn’t get them where they wanted to go. The moment Trump released the transcript, that was it for the impeachment narrative on Ukraine. So now they’re trying other things. They’re trying to get Trump cabinet members and other staff members to show up and testify to undermine Trump ambassadors and this kind of thing, and they’re doing it all behind closed doors. They’re not letting anybody hear what anybody is saying.

The truth of what has transpired now is back on May 22nd, Pelosi — in an infrastructure meeting with Trump at the White House — storms out claiming he had a “meltdown.” She goes to the microphones, and the Drive-Bys report that he had a meltdown and that we need to “pray for mental health.” They’re redoing that yesterday. We’re not playing ball with it. I’m not even gonna go through the motions. We’re not gonna replay the audio. We’re not gonna give Pelosi the time. I’m just telling you straight out what this is really all about.

They have now decided — and we have this from Pelosi’s own words — to try to turn this back once again on Russia. Now her new talking point is, “All roads lead to Putin.” So the short version of this is that everything they’re trying is not working. Now, you won’t know that. You’ll have to conclude that on your own using intelligence guided by experience, melted and coupled with common sense. Why is it the whistleblower no longer matters?

Why does the collusion thing not? Where’d that go? They were gonna impeach a guy over a phone call. What happened to all this so-called impeachable stuff before that? Well, when it bombs, it bombs. You drop it, and you move on to something else. And they’re doing that, recycling things that have failed now. They’ve run out of new things. Now they’ve got something new. Now they’ve got Mulvaney announcing the G7 at Trump Doral. Now they’re all hepped up.

They’re going back to getting Trump on the emoluments clause, meaning, “He’s gonna do this! He’s gonna profit! He’s going to personally profit! He’s going to corporate on this! It’s obscene! This is obscene. Presidents can’t and shouldn’t do this!” Mulvaney is just toying with them in his answers. Now, Pelosi, she’s fairly smart. I mean, she knows to change unfavorable narratives. She didn’t want an infrastructure deal with Trump. They don’t want any deal with Trump that is going to improve America.

Especially now, but certainly not since they took over the House in January. There’s no way. That’s why they’re not talking about anything that matters to people. They don’t want any progress that Trump can claim any credit for or that the people would give Trump credit for. So they’ve dropped everything. She changes narratives. She doesn’t want the infrastructure deal, so she blew up the meeting and claims that Trump melted down.

I think what is driving the repeat performance of yesterday is how bad the Democrat debate was. Folks, it was a disaster from their standpoint. Well, mine too. But I’m just saying they know it. It was an abject disaster. There are supposedly… There are two frontrunners. Plugs is obviously… You know, it’s fascinating. What Pelosi’s saying about Trump actually could be applied to Biden. It could be true. Elizabeth Warren melts under any confrontational pressure. She will not explain how she’s going to fund any of her proposals ’cause it means tax increases.

She’s not gonna admit it. So she changes the media narrative to try get everybody’s attention away from the debate, put it back on Trump, and back on Russia. Now they’ve got something new with Mulvaney announcing the G7 summit. So it’s just an ongoing attempt here to create this massive image that Trump is all these horrible things — and I think the exact opposite of those who think the conventional wisdom is right, that Trump is imploding and that this is the end and the media’s winning. The Democrats are winning.

I think it’s the exact opposite, which I will explain in detail in a moment. But I do have to answer the call we had from the guy who said, “I’m not… I don’t like Trump abandoning the Kurds. This is a bad thing. I’m still gonna vote for Trump but I think it’s a bad thing. You don’t abandon your allies like this. It’s a bad move.” Now, I have said countless times the only person who can force Trump’s voters away from him is Trump. The media can’t do it, and they’re learning they can’t do it. The Democrats can’t do it.

They will never learn they can’t do it. They’ve launched everything to no impact. But for this impeachment thing to work… Remember, she doesn’t want to vote, she doesn’t want a trial, she’s trying to create massive public opinion against Trump that would force the Republicans in the Senate to abandon him, and that would lead to Trump resigning. That’s the dream. So now they’re on to Syria and Russia, and Pelosi’s saying, “Trump pulled the troops out of Syria to help Putin! All roads lead to Putin!”

All roads lead back to the Democrats’ inability to accept the election results.