How Obama and Clinton Created the Mess in Syria 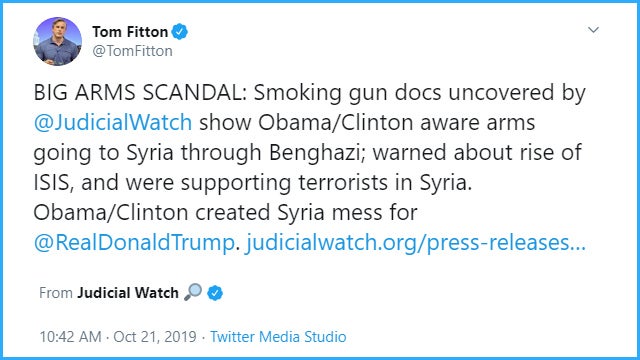 This is Tom Fitton Judicial Watch. You remember when the Benghazi thing happened there were immediately questions asked, “What in the world was the ambassador doing there?” Libya had become an absolute hellhole. It was stateless. It was being run by various terrorist camps.

The Benghazi attack happens, and one of the explanations we got for the ambassador being there was that he was actually participating in an arms — what would be the word? — they were shipping arms up to Syria from Benghazi. They were going to Benghazi. The Obama administration wanted to arm various aspects of the Syrian rebels, and they were doing it on the QT by sending the weapons through Libya, i.e., Benghazi, and that that was one of the reasons the terrorists attacked was to prevent the flow of arms up to Syria from Benghazi.

So that comes up, you know, Hillary laughs at it and pooh-pooh’s, what does it matter now, what difference does it make now? And so Fitton’s tweet here is fascinating: Judicial Watch uncovered documents, smoking gun documents show that Obama and Clinton were aware that arms were going to Syria through Benghazi, that Obama and Clinton were warned by the rise of ISIS and were supporting terrorists in Syria with these arms shipments.

And he concludes by saying that Obama and Clinton created the Syria mess for Donald Trump. If this is true, then what this is an example of, of the war lobby at work, making sure that there are weapons to sell. They have to be manufactured and they have to be shipped. You ever wondered — like Adnan Khashoggi. You remember Adnan Khashoggi from the old Lifestyles of the Rich and Famous show? If you don’t, he’s related to this Khashoggi journalist that supposedly was murdered in the Turkish embassy, the Saudi embassy in Turkey by the crown prince Mohammed bin Salman.

Anyway, Adnan Khashoggi was one of the wealthiest men on the planet. He was Saudi and Lifestyles of the Rich and Famous was one of his covers! “Robin Leach, Lifestyles of the Rich and Famous.” And they chronicled this guy’s lavish playboy lifestyle all over the world. But they never told anybody what he did. They just assumed, oh, he’s Saudi, it must be oil.

And they would show him on his yacht. They would show him entertaining a bunch of models and Hollywood actors and so forth on his yacht. I remember one episode of Lifestyles of the Rich and Famous they’re following Khashoggi, he’s walking through either the New York Stock Exchange or some place where there’s all kinds of signage with current market activity. And supposedly Khashoggi sees something on one of the stock tickers and points at it and then nudges one of the aides standing next to him, Robin Leach says, “Khashoggi even making deals walking through the New York Stock Exchange, seeing things that others don’t.” And so we were all supposed to be impressed.

Adnan Khashoggi was a gun runner! He ran arms to anybody who would pay for them. He had no allegiance to any side. He would just sell ’em to whoever wanted ’em. And everybody knew it, except the people that watch Lifestyles of the Rich and Famous. Now, I’m sure you’ve heard many stories about guys — there been movies made, you watch movies, buy movies, yeah, the bad guy’s a gun runner, an arms manufacturer, arms dealer, they’re all over the place. How does that happen?

Why are there guys, how are their guys that get black market guns — the U.S. manufactures guns, they sell guns and ammo all over the world, weapons of war, that’s one of the business interests of the United States, and we sell ’em to allies. Nothing untoward about that, don’t misunderstand. But these arms dealers somehow get themselves in the middle of all of this, end up with their own stock, their own supply and sell ’em to anybody at greatly inflated prices because they’re hard to come by legitimately.

Anyway, there’s apparently enough of the stuff made that any of these arms dealers can become fabulously rich doing this. They are sought as criminals by Interpol, but the point is they exist. They’re allowed to exist because the war lobby — people make money on war like you can’t believe. It only stands to reason if you stop to think about it. And I’m just telling you all this because the last thing in the world these people want — and it is a business of the Washington establishment — the last thing these people want is the U.S. getting out of war.

Ask yourself this question. Every presidential campaign — you can go back, I can go back to when I first started paying attention to the Kennedy years and then I kind of veered in and out of it, come back at full attention the Reagan years. And then the left demanding we get out of South Africa, disinvest here, divest there, get us out of there, Gary Hart and Mondale arguing in ’84 who can get us out of this part of the world the fastest, which wars — they all promise, all these Democrats — Obama, doesn’t matter, John Kerry, who served in Vietnam, Algore, Bill Clinton, they’re gonna get us out of war. They’re all war protesters, they want no part. 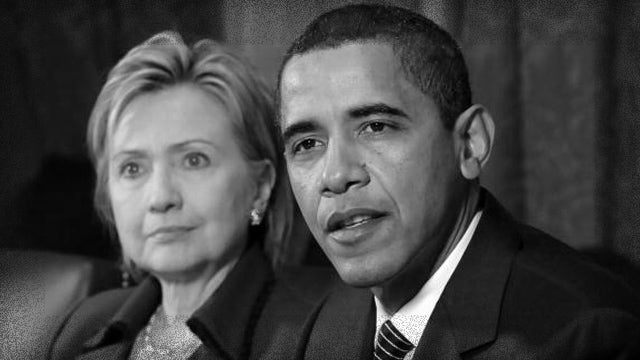 And yet, when they get elected, what do they do? These wars that they’re gonna get us out of seem to never end and in fact get bigger. Obama and Afghanistan. Obama and Iraq. Now, Obama got us out of Iraq because that was a political requirement. Obama won election in part because the media and the Democrats had so savaged Bush and the war in Iraq. They blamed it for a recession that never happened. They blamed it for an economic downturn they predicted was gonna happen. Remember them savaging Petraeus even before he had testified.

They had to get out of Iraq. But they didn’t get out of the war. Getting out of Iraq created ISIS. It left a void. Iraq became stateless. And as Iraq becomes stateless as the U.S. presence is eliminated, guess what? The void, the vacuum gets filled, ISIS is created, and what does that mean? Why, we gotta go to war to stop ISIS. Well, let me tell you something. We have defeated ISIS. That’s one of the reasons Trump announced the 50 American troop adviser pullout of Syria. We have defeated ISIS. Mission accomplished. It’s done.

The media won’t tell you, they’re not gonna give Trump any credit whatsoever, especially since Obama is the one they want to credit for this. But Obama gave birth to ISIS. He called them ISIL. And so war continued. Now, here comes Trump getting us out or announcing he’s going to, and all hell breaks loose. Uh, uh, uh, we got too many people way too invested, futures depend, college educations for their kids depend on us being at war.