It’s Government Versus the People All Across the Globe

RUSH: This is John in Dover, Delaware. You’re up first today, folks, and I’m glad to have you with us, John. Hi.

CALLER: Hello, Maha Rush, God bless you for what you do, sir, and thank you for taking my call.

RUSH: Thank you. It’s not enough, sir, but I appreciate it.

CALLER: You’re welcome, sir. I just wanted to mention a fact of the matter, sir, and that is, you know, we’re being attacked here in the United States as conservatives from every angle. They’re coming from above and below and left and right, but it’s not just on an American scale. If you look at what’s going on in the World News, conservatism is being attacked everywhere.

RUSH: Well, you’ve probably expressed the sentiment of a lot of people. I don’t think that this is just strictly liberal versus conservative. That’s certainly what it is. But this is the forces of what I would call government. And I think government exists today pretty much everywhere you go in opposition to the people. This is really what people have sensed for years. I mean, I could dress it up and I could make it more in depth and intellectual sounding, but when you boil it down, this is governments opposed to people.

In this country this is clearly what it is. This may make you uncomfortable, but the government is now engaged, and has been since Election Day of 2016, in attempting to reverse the results of the 2016 election. That is exactly what this is.

Now, encompassing it is the personal destruction of Donald Trump, the rendering of your vote as meaningless and irrelevant. And once that happens one time, folks, that’s it! If they think they can do this any time they lose and don’t like the result, then elections become meaningless.

This is the United States government. You can fill a name in the blank. You can put Obama. You can put John Brennan, Clapper, Pelosi, Schiff, take your pick of any name of anybody in the government. They are aligned against the people of this country.

In the U.K. it’s the same thing. The existing government bureaucratic apparatus of the United Kingdom, of Great Britain, is opposed to the people who voted to exit the European Union. They have refused to implement this. They have been attempting to thwart that election, and they haven’t stopped. It has cost a prime minister or two, and it will cost more. They’re not stopping until they can reverse it. And if they can’t reverse it, they are going be purposefully make it so painful as to cause people that voted for it to pay a price economically to make them regret ever opposing government again.

You mentioned Hong Kong. What the hell is that? That is the sitting government of the ChiComs refusing to allow the people of Hong Kong to live as they have lived all of their lives and then some. It’s not just conservatives under attack. It is average citizens who resent overlord government control of their lives in opposition to that very government.

You’ve got some American citizens who support the Big Government. They are Democrats. Democrats and liberals, some of them ignorantly, some of them the result of lousy education, some of them, however, are gigantic pro-Big Government leftists because that’s how they get even with people they hate. Whoever they are, these are people that want to use the power of government to punish their enemies, their opponents, or what have you. 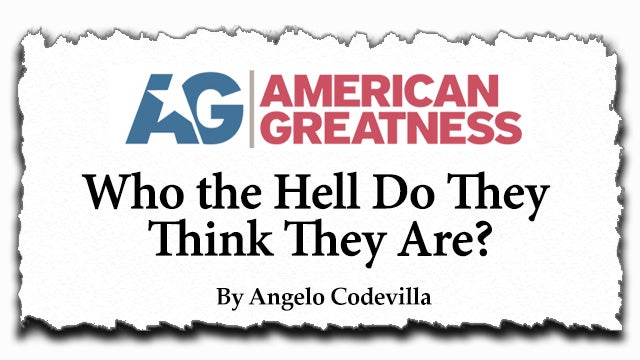 This is what we are really up against here. I call your attention again to the piece I read, still have it here, Angelo Codevilla was rendered as angry as I’ve ever read him after he read an op-ed in the New York Times by retired Admiral William McRaven who essentially called for a coup if that’s what it took to reverse the election results of 2016.

And Codevilla’s headline is: “Who the Hell Do They Think They Are? With William McRaven’s call to oust President Trump — maybe through impeachment, maybe through a coup — the military officer class joins the establishment in claiming a right to rule, regardless of the outcome of elections.”

This is what we are up against here. And this is why I get irritated. It’s exactly what it is. Republicans have in a built-in excuse not to defend Trump. Sorry. I stated that the wrong way. Republicans have a built-in excuse not to fight the forces of Big Government, massive government power, and that is, “Well, I would have to defend Donald Trump, and I can’t defend Donald Trump.”

Well, you see, folks, in this equation, this isn’t about Donald Trump, when you really get down to it. This is not about Donald Trump. Trump is a convenient excuse for people that don’t want to push back on this. Don’t misunderstand. He’s gonna come and go. The effort to eliminate the power of the people is going to continue.

Trump happened to tap into this sentiment in 2016 and got elected. I’m convinced that not everybody that voted for Trump loves him and likes him as a person or whatever, but they understood and understand, I think there are more and more people coming to understand what he represents. What he represents is what people are supporting. There is nobody else.