RUSH: Before we get to the Democrats in panic stories, a couple of setup stories. The first one is funny. It’s from ABC news. “Trump Campaign Scoops Up Biden’s Latino Voter Web Address, Trolls His Voter Outreach.” What happened here is that Plugs went out yesterday and launched his Latino coalition. He made his big move to try to secure Latino votes, but he forgot to register the Web addresses and the Twitter account for it. The Trump campaign scooped ’em up. The Trump campaign scooped up all of Plugs’ Latino outreach Web addresses and Twitter accounts. Here’s the pull quote from the story. 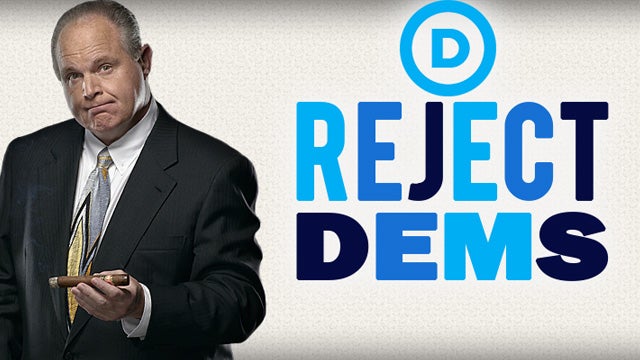 “Biden, who spent the day campaigning across Pennsylvania and Iowa, announced ‘Todos Con Biden,’ a ‘national network of Latino supporters’ working to help elect the former vice president earlier on Wednesday. But there’s one problem. The Biden campaign failed to purchase www.todosconbiden.com, or even lock down the @TodosConBiden Twitter handle before announcing the new effort — prompting the president’s reelection team to do what it does best: troll. Now, the Trump campaign is using www.todosconbiden.com to mock the former vice president, with a landing page that says in both English and Spanish, ‘Oops, Joe forgot about Latinos.’”

He’s out there plugging his address, forgot to register it, Trump scoops it up, creates a home page that when Latinos go there, “Oops, Joe forgot about Latinos.”

“The page also links out to the president’s own Latino outreach coalition ‘Latinos for Trump.’ And the @TodosConBiden Twitter account, in the possession of the Trump campaign, has already begun posting unflattering counter messaging targeting Biden.”

It’s just another – (interruption) No, no. You can’t lay this on Biden, he’s got staff that’s supposed to do this. But the staff is a mirror of the principal, and Joe just does not inspire energy out there.

Then the next story, this is from basically Politico, “Biden surges to largest lead in polls in April in CNN national survey.” Why would a bumbling fossil fuel mired in corruption surge after a terrible month? No, no. I’m serious. Forget whether there’s been any proof of it or not. I mean, the allegations that Biden’s kid has gotten rich for all these unqualified associations and corruption. These are the kind of things that, traditionally, would inflict great harm polling-wise on a candidate. Plugs has surged 10 points.

There’s an answer to this, and it’s very simple. Elizabeth Warren and Bernie Sanders scare a lot of Democrats. As bad as Biden is — and he is a walking, talking disaster — they are worse. It’s not a coincidence that Biden’s uptick in this CNN poll coincides with CNN yesterday asking, is there anybody else? Because the answer is not Bernie Sanders or Elizabeth Warren.

Which takes us to the Democrats in panic story number 1. This is in TheHill.com. It’s by Amie Parnes. The headline: “Democratic Handwringing Hits New Highs Over 2020 — Democratic bed-wetting over the 2020 primary has reached a previously unseen level,” is how the story begins.

“Fear that the party doesn’t have the candidate to win is an evergreen aspect of the modern presidential race. In just about every presidential contest in recent memory, there have been moments of existential fear among Democrats. But the worry this time, when the party will nominate a candidate to take on President Trump in an effort to end his time in office at one term, are like nothing seen before, say Democrats.”

The worries that Democrats have this year are unique. They’ve never had them to this degree before. “This is like the Democratic bed-wetting of past cycles except everyone evidently drank a gallon of chardonnay before they went to bed,” said Democratic strategist Eddie Vale.

Why? Well, this story says “the Democrats are pulling out their hair like never before because they want to learn lessons from Trump’s 2016 victory, and a fair number of big party donors are not ‘the best gauges of how the public will see things versus the people in their own social circles.’”

Basically the Democrats are out of touch, don’t know how to get in touch with Trump voters, don’t know who they are, worried that Trump voters still love Trump, Democrats don’t know how to reach ’em. And that’s absolutely true! The Democrats have made no effort to reach them. The Democrats in the media have done nothing but mock them and impugn them, laugh at them, make fun of them and pretend that they were a one-off that are not part of a movement and they’re not gonna show up again in 2020. That’s what they’ve been telling themselves. 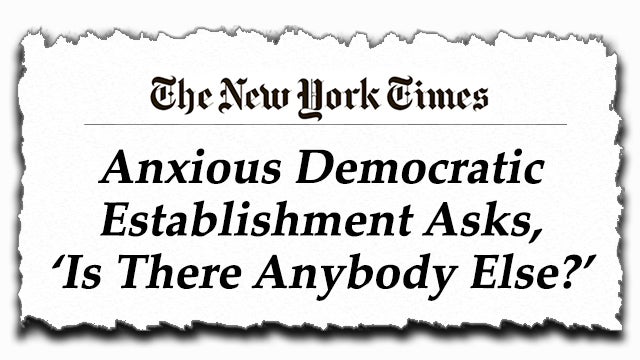 “The New York Times crystalized the fears in a story earlier this week about ‘anxious’ Democratic donors wondering if the party would be better served with a new candidate.” And this is the story that threw out the names Hillary Clinton and Michael Bloomberg. You’d be amazed the number of Democrats who think that Bloomberg would win in a landslide. Just to show you how out of touch they are, they think that would be nirvana, if they could persuade Bloomberg to take the plunge.

Democrats in panic story number two is from Bloomberg. “Democrats Face Their Fears in Wisconsin.” Now, this, folks, is a much longer story than I have time to delve into in great detail because it’s a very comprehensive history and analysis of Wisconsin voting. Now, we’ll link to it at RushLimbaugh.com. It’s worth reading.

What it shows is the things that Democrats fear most, that Trump is building on the voters he got in 2016. He’s not losing them. Remember our caller from Santa Cruz. He said, “You know, I voted for Trump in 2016. I wasn’t originally crazy about him. But I did. But now, now I’m a bigger Trump supporter than ever.” This is what Democrats are learning is the case in Wisconsin.

Pull quote: “After initially targeting Wisconsin’s 23 Obama-to-Trump counties,” meaning there were 23 counties in 2016 that had voted for Obama twice that voted for Trump, a Democrat consultancy group named American Bridge has expanded its target list to 30 Wisconsin counties. “We want to identify potential Trump defectors who will share their stories and elevate their voices,” said American Bridge spokesman Jeb Fain. “’Folks are a lot more likely to be responsive to a message like that from their friends and neighbors.’ Priorities USA plans to spend tens of millions on local research and advertising, highlighting Wisconsinites who have ‘felt the negative impact of living in Trump’s economy.’”

They’re having trouble finding them, though, that’s the point of the story. “Democrats Face Their Fears in Wisconsin.” They are encountering Trump voters who are more committed to Trump now than they were in 2016. This writer goes on to say that whoever wins Wisconsin is gonna win the presidency. The writer of this story is an ultra left-winger by the name of Francis Wilkinson.

This is Democrat analysis. Bottom line is they’ve told themselves that Wisconsin is key for them. They can’t believe that it’s even in play for Trump after this. They thought that they would have persuaded Wisconsinites that they’d made a mistake in 2016. They’re finding a more energized Trump base now than in 2016.

Democrats in panic story number 3 from Breitbart. “DNC Announces All-Female Moderator Panel for Next Debate amid Neutrality Concerns and Sinking Viewership.” The last debate on CNN was a ratings disaster. So their attempt now to revive it is to have an all-babe moderator panel.

The babes are gonna be Andrea Mitchell, NBC News, Washington; Kristen Welker, NBC News; Washington Post Ashley Parker; and Rachel Maddow from LGBTQ — MSNBC. They’ve now found that so many NBC executives have contributed the maximum amount to Democrats and Biden that they’re worried that the whole effort will be seen as partisan.