“Democracy Dies in Darkness” Isn’t a Warning, It’s a Plan!

RUSH: The Washington Post headlines on the story of the death of Abu Bakr al-Baghdadi Sahib Skyhook… You know, the Washington Post had this motto. They changed their motto after Trump was elected president to “Democracy Dies in Darkness.” We thought, “Well, these people are a little nuts.” “Democracy Dies in Darkness.” Actually you know what? I don’t think it was a warning. It’s their plan. It’s their plan to keep you in the dark about things that really happen. The death of Abu Bakr al-Baghdadi… How about this headline: 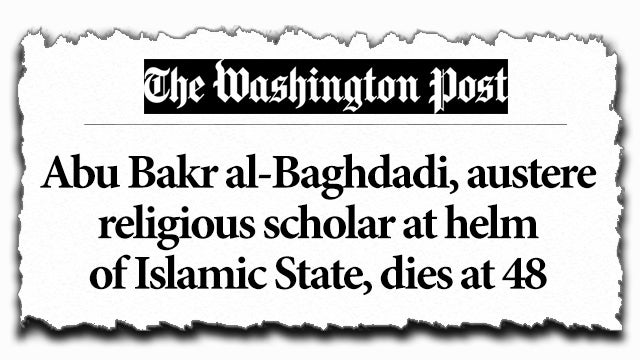 “Austere Religious Scholar at Helm of Islamic State Dies at 48.” “Noted Philanthropist Adolf Hitler Commits Suicide in Passionate Last Moment.” Could you imagine how the Washington Post would deal with other famous…? “Mao Tse-tung, Who Deprived 40 Million Chinese of the Pain of Suffering Life, Murders Them with Great Compassion — Washington Post.” I mean, it’s incredible, and there’s a reason for this. There’s an activist reason for this.

The word has gone out that at no time and for no reason will Donald Trump ever be portrayed in a positive or even neutral way. Look what happened to the New York Times when they ran a headline which acknowledged that Trump spoke out against racism. Look. You remember. They had to change that headline because their leftist subscribers bombarded them. (sputtering) “That was too fair! That was… That was not hard-hitting enough on Trump!” So they rewrote the headline and rewrote the story to make it an excoriating accusation of racism against Trump.

“Democracy Dies in Darkness.” It’s not a warning. It wasn’t something they were afraid of. It was their plan to keep people in the dark!

RUSH: We’ll get to the al-Baghdadi circumstance. Remember, my friends, on this program, we don’t do topics here. We do issues. We do play-by-play of the news. That’s exactly what I do. There’s nobody better at it — play-by-play of the news in real time — and, of course, the news of the real time right now is Trump in Chicago. We’ll deal with that first. We’ll go back. We’ve got sound bites of Trump making a speech about the death of al-Baghdadi. We have… (chuckling) We have the Washington Post story by David Nakamura.

“In Creating Spectacle Around Baghdadi’s Death, Trump Departs from Obama’s More Measured Tone on Bin Laden.” Predictable. These people are as predictable as the sun coming up. (sniveling) “Trump’s bad. Do you see how gauche he was announcing the death of that poor terrorist leader? Oh, an austere religious leader! Trump murders religious leaders! It’s unfair. Obama was much more elegant when he announced the Americans killing Bin Laden — much more elegant.”