RUSH: What? (interruption) Oh, the booing at the Nationals…? You know, that is a great illustration. That whole incident where Trump goes to the World Series game last night? The Washington Deep Staters against the Houston Astros, right? So the Deep Staters, they show Trump on the big Videotron at the game, and the Deep Stater fans — and that’s what they are. They’re Deep Staters. 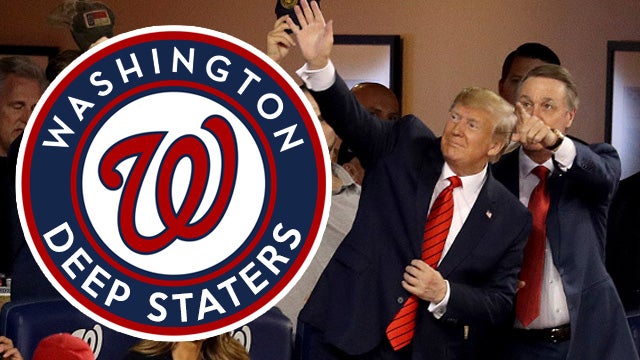 I mean, it’s Washington, D.C., it’s strategery. It’s government suburbs. And so everybody there except the Houston fans starts booing Trump left and right. Trump’s in there smiling. He’s got that gigantic smile on his face with Melania next to him. He’s just having a great time. The Deep Staters and the Deep Stater fans are booing him. That’s a microcosm for America, folks. Oh, don’t be worried about that. No, no, no. That’s classic.

RUSH: Now, about Trump getting booed, I want to get this out of the way ’cause I’ve got the sound bites here for Trump in Chicago. We’re gonna come to those right after the break. Trump is getting booed in Washington at the Nationals game with the Houston Astros, the deep staters in the World Series. He gets cheered everywhere else in the country. Everywhere he goes he gets cheered by the throngs. And I think Trump getting booed and those people in that stadium last night shouting, “Lock him up, lock him up” illustrates the Washington swamp about as well as anything can.

What did you have? You had a stadium 95% filled with swamp dwellers, people from Washington, people from northern Virginia, suburban Maryland, liberal Democrat faux elites, people who made their living working for government. It’s that northern Virginia bunch especially that loves that blackface governor. Remember that?

Ralph Northam. Ralph Northam, who went and done had his photo taken wearing blackface while he was in med school and then said when it came to abortion, go ahead and kill the baby after it is born, make it comfortable and zap. Got it, Bo? He’s still there. No complaints about Ralph Northam. Lieutenant governor violates every tenet of #MeToo. Liberal elites in northern Virginia couldn’t care less that their governor is a racist.

The only deplorables in that stadium, a few hundred fans that were traveling from Houston. And if you paid attention to the Drive-By Media, Trump being booed at the game was a bigger story than nailing Baghdadi. And of course it was! Makes perfect sense. Because the only coverage of Trump will be negative. It’s a microcosm, folks. What happened in that stadium is a microcosm, Washington, D.C., versus the rest of us, Washington, D.C., with a select few elites and a very narrow framework and point of view versus the rest of the country with the exception of the elites on some of the other coasts.