Which Impeachment Polls Should We Believe?

RUSH: Grab audio sound bite number 19, Mister Broadcast Engineer. I have a story here from the Washington Examiner: “Why Republicans oppose impeachment: Trump is even more popular with his base than Obama was.” Now, this is something that we’ve been told, the polling data has demonstrated. This is not a surprise. We’ve been told two things. We’ve been told that Trump is at the same overall approval rate of 41, 42% that Obama was at the same point in his first term. 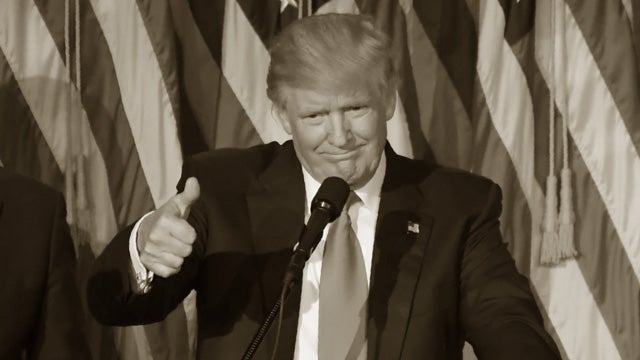 That stuns a lot of people, by the way. A lot of people have forgotten. Everybody assumed, because of blanket, pro-lovey-dovey media coverage, that Obama was in the fifties and sixties approval. He never was. Did you know that? Never was. Obama at 42, Trump at 42. Trump’s even a point higher in many polls. But in his base, Trump’s got upwards of 85 to 92% approval from Republicans. Obama never had that on the Democrat side.

And yet I’m sure a lot of you are asking, how can it be? How can it be that Trump is more popular with his base than Obama was with his? And again, the reason why you might not believe it is media coverage. The media made Obama look loved and adored by virtually everybody, except Republicans, of course. And they were cast aside as irrelevant.

The coverage of Obama was smotheringly, sycophantically, saccharin sweet. I mean, every day you had to watch out for your insulin level skyrocketing if you paid attention to it. So you would conclude that Obama was massively loved, massively adored. And then you would see polls on Michelle (My Belle) Obama, and her love was even higher and the percentage of Americans that admired her was even higher than The One. But Trump is actually more popular with his base than Obama was.

Philip Klein, Washington Examiner: “Any effort to remove President Trump from office through the impeachment process is going to come up against a brick wall in the Senate, where 20 Republicans would have to defect to oust him.”

Okay, so you see that, then you go to Philip Klein here in the Washington Examiner: “Why Republicans Oppose Impeachment.” And Trump’s approval number with his base is sky-high. So what’s what here? Who do you believe? And it leads to another question. Here’s a full quote from the Klein piece. 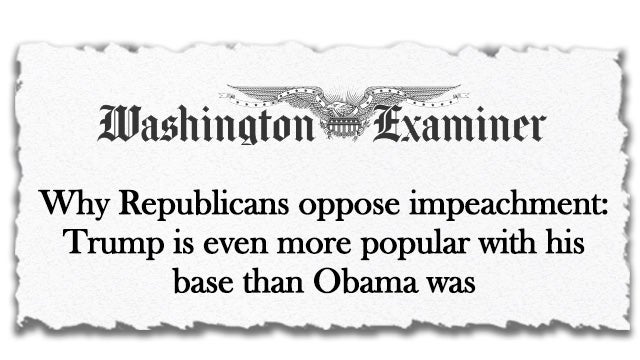 Among Republicans, Trump’s “approval rating is 87%. At the comparable point in his presidency, Obama’s performance won the approval of 77% of Democrats.” Trump is 10 percentage points higher in approval in his base than was Obama. In addition, “Obama was less unpopular among independents and the opposition party than Trump.”

So this is all good news for the Republicans. Do they believe it? “Any effort to remove President Trump from office through the impeachment process is going to come up against a brick wall in the Senate.” Well, not according to Drudge. Axios and some of these other stories, apparently in the Senate, Republicans are quaking in fear. Apparently in the Senate they’re paralyzed. They don’t even want to have to defend Trump. Oh, my God. They’re scared to death. They might even be forced to vote against Trump if the impeachment ever got there. Which it won’t, mark my words.

But they’re not trying to win them. It’s another reason why I think they’re on defense. So if Trump is even more popular with his base than Obama was, then how in the world can anybody think there is going to be an impeachment? How can anybody think that a trial in the Senate would lead to a conviction? So do the Republicans believe this polling? Do Republicans believe the 87% approval in Trump’s base?

On the other hand, the Democrats are running around saying they’ve got polling data that an increasing number of Americans want Trump gone, increasing number of Americans favor the impeachment. Do the Democrats believe their polling? It has bitten them in the butt constantly. They believed the presidential polls of 2016 where Hillary was gonna win in a landslide. Every poll that is anti or negative Trump, they believe it, and it comes back to bite ’em. So do they believe their polls, or are they proceeding despite them?

Now, Andy McCarthy, audio sound bite number 19, was on Fox this morning. Question: “With Nixon, it was a resounding call in the House for the impeachment process to begin. Bill Clinton’s were not quite as strong, but they were similar. In other words, they were both very partisan efforts, the impeachments. Do you think there will be that kind of vote this week? These are not articles of impeachment, but do you think this week’s vote would be the same kind of sentiment of emotion expressed by the House as was expressed against Nixon and was as expressed against Clinton?”

MCCARTHY: This is a very different impeachment in that in the Clinton and Nixon cases, they derived or deduced this finding that the president was unfit for office by the impeachable acts, whereas here what we’ve had is the Democrats really never accepted Trump as president, decided he was unfit from the moment he entered office and have been looking for something they could hang their hat on for purposes of actuating that conclusion. 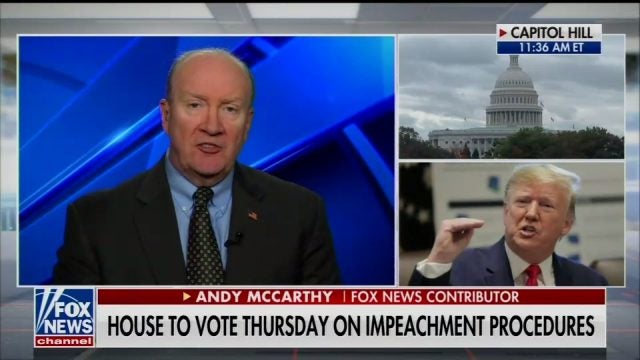 RUSH: Let me translate that for you. What Andy is saying here is the Clinton and Nixon impeachment started with crimes, actual crimes. Clinton committed perjury. He lied before a grand jury in the Paula Jones case. Clinton was not impeached over a blue stained dress or a cigar, despite what many people think. He lied under oath to Ken Starr’s special counsel investigators and suborned perjury of associates. That’s why he was impeached. Real crimes.

But they don’t have a crime. Now, it has been said — and you know who said it? Gerald Ford. They asked him one day in 1970, they asked Gerald Ford, “What is an impeachable offense?” He said, “Anything the House of Representatives says it is.” What is a high crime and misdemeanor? “Whatever the House of Representatives says it is.” Bribery is definitely a crime, but Trump hasn’t committed bribery. All they’ve got is high crimes and misdemeanors.

Clinton committed crimes, lied under oath, lost his law license for a year. That’s when he found Jeffrey Epstein to pal around with, suborn perjury on the part of the others. Nixon, Watergate. But they don’t have a crime. So what this is, this impeachment has been in the works since election night of 2016.

It has taken many forms. It’s taken the Russia collusion, Russia meddling form. And then the insidious, the absolutely horrid Mueller investigation, which was not an investigation because even there, there was no crime. No crime has been found. They’re desperately searching for anything that they can convince the American people Trump has done that is criminal.

RUSH:  Here’s a story in Breitbart: “GOP Polling Memo Shows Public Turning Against Democrat Efforts to [Impeach] Trump.” “The internal polling data showing impeachment failing comes towards the end of the broader page-and-a-half memo, which explains why the public polling is so different from what the RNC is finding.” “A memo by the RNC that contains internal GOP polling data shows the American public, even Democrat voters, are turning against the Democrat Party’s ‘impeachment inquiry’…”

Matt Schlapp on Fox today said it’s 10 points underwater.  Now, do the Republicans believe this?  Do you think it’s in their best interests to believe this?  Is it in their best interests to know the truth regardless of results?  Isn’t it better to know the truth so you can act accordingly?  In other words, do they hunt for good news even though it may not be true to find it and latch on to it and are the Democrats doing the same thing? 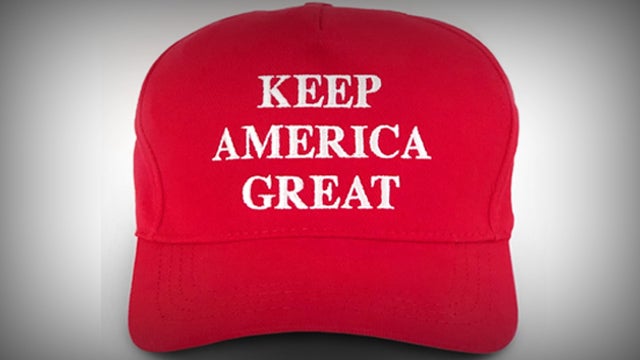 Would we be better off believing this polling, “public turning against Democrat efforts,” or would we be better off believing the Democrat polling, which is showing Trump is losing?  Which would keep us more on edge?  Which would keep people more focused?  Because the point is, the polling is all over the place.  The Democrats have polling data saying that they’re marching ahead because the American people want it.  RNC internal polling says the exact opposite.

RUSH: I mentioned moments ago that the lead story on Drudge is an Axios story. The headline: “Republicans Fear 2020 Wipeout.” And then there’s another story that says the Republican Senate is paralyzed. They’re paralyzed. They’re quaking in fear. It’s becoming increasingly harder to defend Donald Trump, and they don’t know what to do, it’s so bad.

Now, I have a tweet about this from the president. It says: “Nervous Nancy Pelosi’s doing everything possible to destroy the Republican Party.” And, by the way, that means the media is doing everything they can to destroy the Republican Party. Trump says: “Our polls show it’s gonna be just the opposite. The do-nothing Democrats are gonna lose many seats in 2020. They have a death wish led by a corrupt politician, Adam Schiff.”

Now, may I take a moment to briefly analyze and comment? Yes, because it’s my show. Adam Schiff is an abomination. Adam Schiff is a categorical liar. He is ill-equipped to deal in truth. Adam Schiff, for the entirety of this so-called investigation of Trump, Adam Schiff has been asserting publicly that he has evidence that Trump colluded with Russia. He’s been saying it for two and a half years. He doesn’t have any.

Adam Schiff should have been sidelined by Pelosi. Adam Schiff is gonna end up being a gigantic liability for the Democrats all over the country. There’s something wrong with Adam Schiff, and I think part of it is that the poison of hatred courses through his veins. Same thing with Eric Swalwell. I think these people are slowly losing their minds.

Brad Parscale, Trump’s campaign manager, tweeted: “We know their districts, have the data of the voters we need, and will have 100s of millions of dollars to find them and turn them out. Nancy has never fought a machine like we have,” assembled. This is Parscale talking about Trump’s campaign. “She is old school and we are working with tools she doesn’t even understand. #AskHillary.”

Parscale is as confident as I’ve ever seen. Now, some people say, “I wish he wasn’t, you know, we need a little bit more humility.” It goes back to what I was asking earlier. If your own polling data says the Democrats are 10 points underwater on impeachment, do you believe it? Would you be better off not believing it? Would you be better off acting like you’re losing so that you don’t get overconfident? It’s just a question. You can ask the same thing of the Democrats.

See, I think the Democrats deal in phony polling data. I don’t think the Democrats can deal with data that’s not good. I think their pollsters know that they’ve got to feed them things the Democrats want. I can’t give you any better evidence than the election polls leading up to the 2016 election. Every one of them thought Hillary was gonna win in a landslide. And you know that’s true. Look at the long faces on election night. They all believed it. They all believed every poll that they invested in that had it dramatically wrong. Now, what polling unit is gonna be rehired if it keeps feeding Democrats the truth if the truth is bad for them?